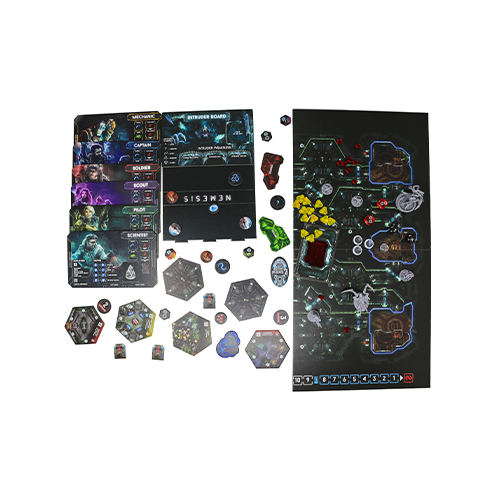 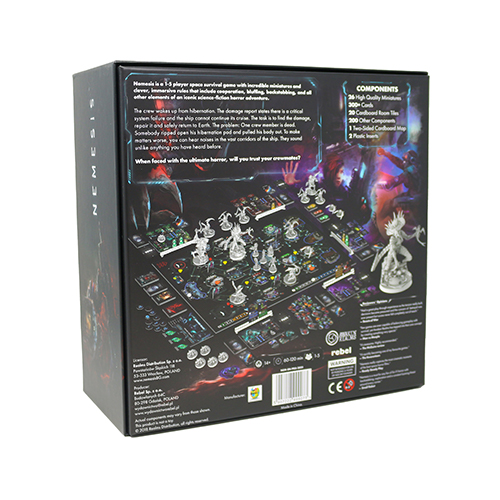 you could earn 9629 victory points

you could earn 9629 victory points

NemesisWe can’t talk about Nemesis without mentioning the clear inspiration it takes from the Alien film franchise. The set up is pure Alien, a theme that has been explored in other games, but never to this degree or immersion. In Nemesis players will each take control of a character waking up from hyper sleep with some serious problems. One being the hyper sleep fog that means th…
Read More
Category Board Games Tags Best Sellers, Exceptional Components, Golden Pear, Podcast Approved, Rebel SKU ZBG-REBNEMENP012019 Availability 5+ in stock
Share
Share this
96%

In Nemesis players will each take control of a character waking up from hyper sleep with some serious problems. One being the hyper sleep fog that means they don’t remember the layout of the ship, and the other being the multiple warnings going off and the dead body. From this point on Nemesis is a game of cat and mouse with the intruders (aliens) and potential the other players.

At the start of the game each player is given two secret objective cards, and at the point that a player first meets an intruder everyone must chose one of these cards. Generally one card will have a more selfish goal and one a goal that benefits the team. Which they choose is up to them. Even if their goals are more team based they may unknowingly conflict with other team mates. Some may want to head the ship to Earth, others may want to go to Mars.

As well as this players will have to be careful in their encounters with the intruders, lest they get infected. An infected player cannot win the game! Nemesis is a game that creates memorable stories each time you play. Last time I played I managed to double check the ship was headed to earth (it was despite what my lying teammates told me) and jump in an escape pod before jettisoning away from the ship. A quick health check showed no infection! However after I left the ship it became clear one player was trying to blow it up, as they set the self destruct before claiming another escape pod! In the dying turns the remaining players cancelled the countdown and returned to hyper sleep!

Nemesis has quality components through out and is in my mind more that worth the higher cost than other games!

Awaken Realms are rapidly becoming a tour de force in the gaming world. Matching incredible production values with solid gameplay has seen them gain well earned clout. Nemesis is their take on the alien franchise. Aside from it being a quite cheeky imitation have they nailed it?

In Space Nobody can Hear you Scream

Nemesis is a semi co-op game. I was going to call it a narrative game but that might be a tad misleading as the narrative develops from you and the other players, rather than reading passages from a provided scenario book. Despite this, maybe because of it, Nemesis has created some of the most memorable stories and experiences I’ve had in gaming.

There is no getting away from the source material, but being as there is no official Alien game in this vein I’m more than happy to let it slide. Lifeform also takes Alien as it’s inspiration and to use the films as a reference if Lifeform imitates Alien, then Nemesis is more like Aliens.

Your chosen characters, with their unique skills, awaken from hyper sleep to a dead body. The hyper sleep fog means that you don’t have a detailed memory of the ship beyond the basic layout. Each player will also start with two objective cards. Generally one of these is more selfish (kill another character or set the ship self destruct!) or a more co-operative one. You don’t choose which to pursue until one of the team first encounters an Intruder.

Game Over Man! Game Over!

Play is card driven and you will move around the ship checking and repairing systems, and often causing a lot of noise. Noise will draw the attention of the Intruders, which will seed the ship through a clever bag building system. The more lucky escapes you have the more the draw bag is filled with danger!

Dealing with the Intruders depends on the gear you have scavenged and the role you play. The solider is far better equipped to deal with the intruders, but they may have their own agenda… Objective cards will lead you to have to explore the ship, find certain rooms, make sure the ship doesn’t blow and is heading to the a certain destination. Sometimes this might mean checking something someone else claims they have done. For example the medic might claim the ship is heading to earth, but who knows if that’s true, and if it isn’t true then what does that say about the medic?

For the ship to carry on working two of the three engines need to be working. You sent Susan to check and fix them but what if she sabotaged them instead? You really need to head back to hyper sleep but should you check them first. All this time the Intruders are popping up like unwanted party crashers, spraying silly string all over the place and eating all the food. And by silly stream I mean hot fiery death and by food I mean crew.

Get Away From Her You Female Dog!

Nemesis does the grand sweeps well. The game is full of suspicion and tension, caused as much, if not more, by the other players as the intruders. There is a level of upkeep that comes with this though, and while it doesn’t break the immersion, it helps if a least one player is thoroughly aquatinted with the rules. Thankfully I found the rulebook to be refreshingly good and appreciated the way it cross referenced itself complete with page numbers!

It goes without saying that the components here are fantastic. Awaken Realms produce some of the best game components I've seen and this is no different. From the 'star of the show' minis to the plastic tokens and cards, everything feels premium. Those wanting a bit more immersion can even pick up the Terrain Expansion to replace even more of the cardboard!

Despite all this goodness the absolute hands down best thing about Nemesis is the stories you will create as you play together. Shaped by individual and collective decisions, these will become tales of legend within your friendship group. Betrayals and heroics will be long remember and how you acted in one game will effect your trustworthiness going forward.

That's not to say this game is for everyone. As mentioned upkeep is a factor, as is game length. Nemesis is not a short game clocking in at a minimum of two hours, which is made more of a problem by player elimination/escape podding. In one game I made an early escape and the other players still had another hour or so to go before they too finished. Thankfully for me this was at a convention and I could wander of and play something else, but it would have been different in my house for example. Players can also die and be out of the game that way. For some this would be acceptable, for me the thing that saves it is again the story you create together.

The semi co-op nature of the main game will also cause concern for some, as it is unusual for this genre to work. I found this to be quite compelling, and I think in Nemesis' case I would call it more of a hidden traitor(s) mechanic, as we could all decide to work only for ourselves, or for the good of the team. Indeed there's a strong argument that without it the game would be missing something. Then again if you have never like semi co-op gameplay there is little to win you over here in that mode. There are ways to change the game though and have a player take charge of the intruders, or even work co-operatively against them.

The game length coupled with potential player elimination/escape podding might put others off too. There is no getting round the length, and if you don't buy into the theme then you may find your patience running thin. I'd also advice having some quick two and one player games off to one side as players can die, or achieve their own personal success some time before the game finishes. This has never been much of a problem as the story keeps on going and has been compelling enough to draw in spectators and players who have left the ship.

My first game of Nemesis was a two player affair where I'd drawn the captain. Things had generally gone well for me with my clumsy team mate attracting all the intruders while I went about my business. Thankfully despite his task of blowing up the ship he actually fixed an engine for me! I returned that favour by ordering him (special Captain perk) into a room full of Intruders while I was left to hop back into hyper sleep. Job done. But I'd forgotten I still have my infection check to do...

That was my first game and I still remember the story we created to this day. I don't know what you want from games, but this definitely satisfies me!