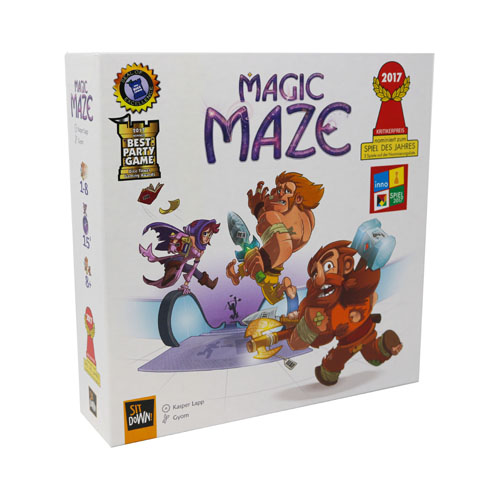 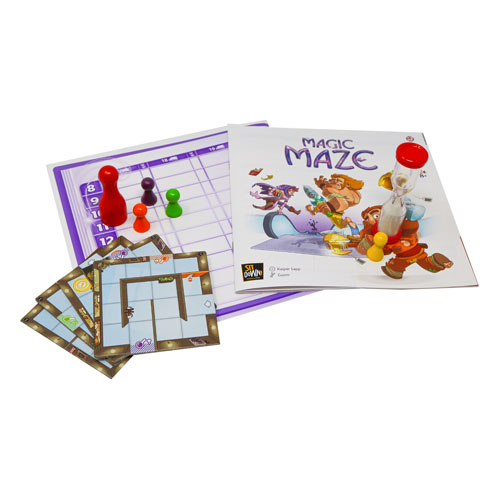 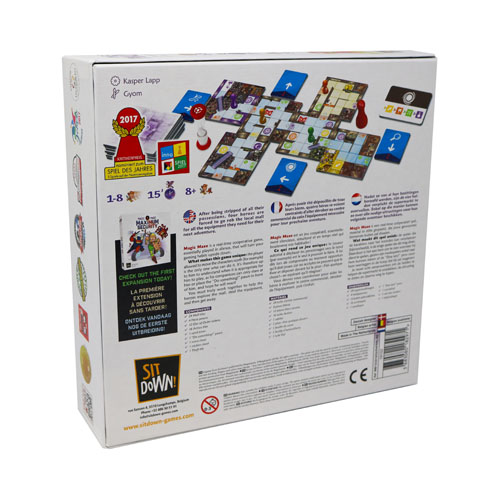 Add to Wishlist
After being stripped of all their possessions, a mage, a warrior, an elf, and a dwarf are forced to go rob the local Magic Maze shopping mall for all the equipment necessary for their next adventure. They agree to map out the labyrinth in its entirety first, then find each individuals favorite store, and then locate the exit. In order to evade the surveillance of the guards who eyed…
Read More
Category Board Games Tags Best Sellers, Dice Tower, Fun For All the Family, Golden Pear, Great Gifts, Kasper Lapp, Magic Maze, Platinum, Sit Down!, Value For Money SKU ZBG-SDGMMZ01 Availability 5+ in stock
Share this
90%

Co-operative games can be a true joy but can also suffer from the problem of ‘alpha gamer’. That is where one more experienced gamer takes over and basically takes everyone's turns for them. Magic Maze is a co-op game that effectively neutralises this by having everyone play in really time and not allowing them to talk!

The game is set in a fantasy world where you play the usual tropes of mage, warrior, elf and dwarf. They have somehow lost their weapons and equipment, so, obviously, they decide to rob the local mall.

When I say you play, I mean you play all those characters. Because no matter how many players there are you will all control the four characters. Oh, and your control of them is limited to direction tiles.

Each player will receive a tile or tiles, depending on player count, with a direction and/or action on them. For example, I might have ‘move north’ and ‘use stairs’. I can use these actions on any character, so together we have to move the pieces around the mall without talking. Sounds easy, but when you are trying to direct four different pieces, to four different places without talking the challenge becomes clearer. To make matters worse there is a strict timer that will need refreshing at certain points.

Perhaps the best component is what I call ‘the big red dobber'. This is essentially a massive red pawn that you can slam in front of someone when you think they should be taking a move. Which is hilarious until it is done to you.

The biggest challenge in Magic Maze is keeping your mouth shut, but when you manage that you discover a fantastic co-op game that is quite unlike anything else I’ve played. The game starts easy and gradually brings in more and more challenge and uniqueness but can be kept (relatively) simple for families too.

“Everything is so clear to me, how do they not see it?  My incredible brain sees everything yet everyone else appears to be baffled.  All they have to do is move one piece and we can get things going again.  Maybe if I tap the “Do Something” pawn in from of them one more time they will get it.  No… that’s not working.  Why are they all staring at me?  Why are they frantically hitting the table in front of ME with the “Do Something” pawn?  Oh… we’re out of time because I missed something…”

Magic Maze is a great way to learn just how unaware you can actually be.  Magic Maze is a co-operative, real-time game released in 2017 by Sit Down!, that was nominated for the Spiel des Jahres award. In this game players take on the actions available to four heroes who are trying to steal new weapons from a nearby mall and escape with them. This means no one person controls the Mage, you all do.

At the start of the game each player is given an action tile showing what they can do. For example, one player may be able to move east and use escalators, while another may be able to move west and use portals. Working together, you need to manoeuvre each hero to their designated location on the tiles that will be randomly drawn and placed, then get everyone out of the mall. In two minutes....Without talking.

More Than a Gimmick

Oh, did I forget to mention that part? That’s right, you can’t talk. You do however receive a large red wooden pawn called the “Do Something” pawn. This is a fantastic tool for ruining relationships, frustrating your wife, or for looking like a fool. You can’t do anything else to communicate other than place this pawn in front of another player.

However, this does allow for some creativity and innovation. You may lightly place the pawn when you need someone to get to something but not necessarily immediately. Maybe you place the piece with a bit of force if you want them to do something they should have done 30 seconds ago. And maybe you rapidly bang the table as a last ditch effort to get them to earn us more time.

Eventually you will have a whole new language made up of knocks and bangs, like a monkey…

It’s not entirely hopeless though as you do have ways to replenish lost time and communicate in a more civilised manner. There are spaces on some tiles that allow you to flip over the sand timer.  These are one time uses and should be used sparingly; only when necessary! The great thing about using them (other than getting more time that is) is that you are allowed to talk.  You can talk until someone takes an action.

Be wary though as this uses up your precious time. Finding the balance between planning and just winging it is a huge part of the Magic Maze game. 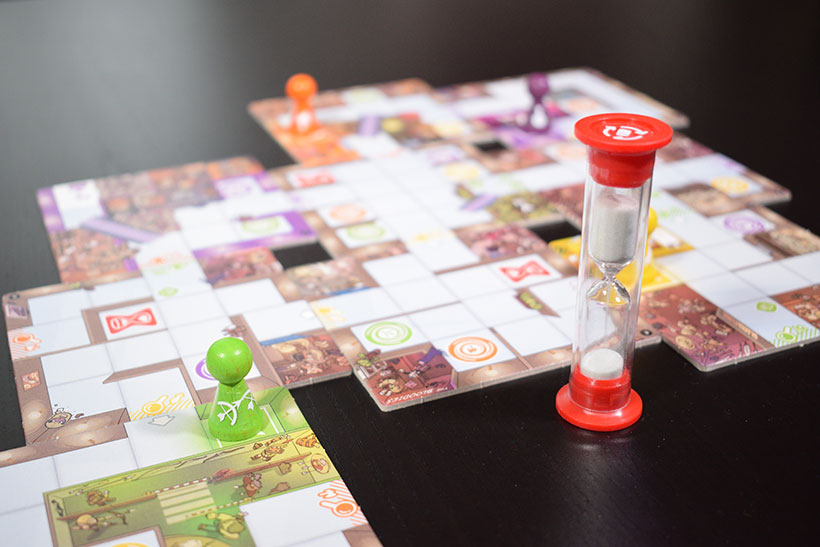 After five or six 15-minute cycles of silence and arguing you will finally get it down and win. You will feel incredible. You will all feel so proud of yourselves. But that will fade. Suddenly someone will comment on the size of the rule book being much larger than what you read up to. Someone else will notice there were tiles still in the box that you’ve never seen. You completed scenario one… the tutorial.

This is the defining moment for your group. Do you decide you’ve had enough already and can’t bear to go on? Or do you fight? You’ve been pretending to be heroes for the past two hours so why stop now?

Scenario two is mostly the same as scenario one, with just a slight variation on the end condition. That’s the thing with the scenarios; they are slight rules changes from the previous scenario. Even so, the seventh scenario is such a different game experience than the first.

The 10 scenarios after that are challenges that change the game rules for that individual game. We’ve not gotten that far yet…

When I first heard about this game I thought it sounded interesting. I enjoy co-operative games and I enjoy real-time games. This seemed right up my alley. Well it took up the whole neighbourhood, destroyed it, and built a shopping mall in its place. It has planted it’s foundations and cemented it’s place in my collection. Alright that’s enough building related puns.

Magic Maze is truly special. It has taken a really simple concept and added the perfect twists to it. I was initially worried the no talking rule would feel like a gimmick but I was so wrong. Magic Maze is as good as it is because of that rule. Without it there’s no challenge.

It plays from 1-8 players and works well at each. Meaning you can crack it open on a lonely Wednesday evening or gather seven of your closest friends and treat it like a party game. The possibilities are endless (for 1-8 people).

If I had one small criticism it would be the theme/story. You control four fantasy heroes: Mage, Dwarf, Elf, and Barbarian. Somehow they have had their weapons stolen from them so they decide to visit the nearby modern shopping mall… From what I’ve seen there is no reason that this couldn’t have been set in a goblin cave. Despite this small grievance I still rate this game extremely highly. It’s a game I introduce to anyone that will let me and they always want to play again and again.

I’ve not played the expansion yet, but I’ve also not felt like I’ve needed to. So far anyway. One day I’ll no doubt get it.