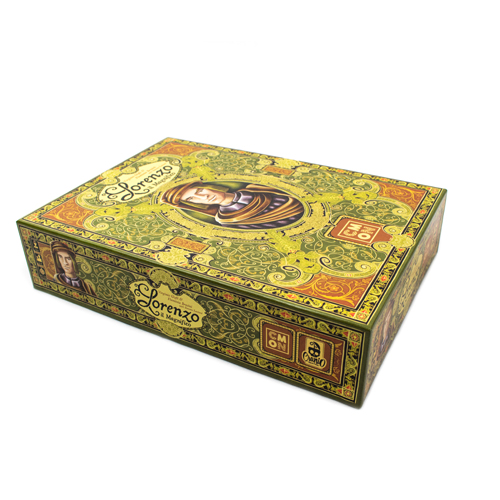 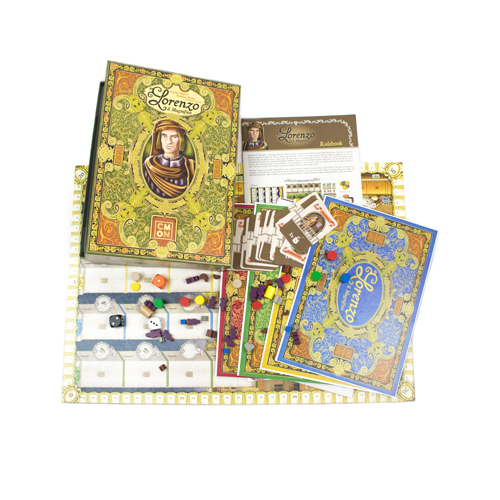 you could earn 4579 victory points

you could earn 4579 victory points

Lorenzo Il Magnifico combines clever worker placement with engine building set in the Italian Renaissance. Each player has four wooden cylinders three in their colour and one in plain wood. These represent your family members and three of them are tied to one of the three dice. The dice are rolled at the start of the round and give your family members their base value for the round.…
Read More
Category Board Games Tags CoolMiniOrNot, Eurogames 2020, Simone Luciani, Virginio Gigli SKU ZBG-CMNLRZ001 Availability Restock Expected
Share
Share this
92%

The Lorenzo here is Lorenzo de’ Medici, a Florentine patron. He was a powerful and influential figure, and the players here aim to earn their own prestige and fame. (Ahem, points.) The game lasts six rounds, and most points wins. Set collection, worker placement, and economic/resource management simulation occur here.

At the start of each round, three coloured dice get rolled. Their value equals the strength of your corresponding family member workers of that colour. These dice results impact the worker placement mechanism. Many spaces require that family members be of a certain strength (or above) to visit areas. Who will you send first? And where? Will you send your family members to the four towers to buy cards? They all cost resources, as well as dice values. Some represent buildings, characters, conquered territories or ventures. Collect the right cards and you can trigger them to get regular boosts. Then you can afford to buy more cards! It’s engine-building, and it’s wonderful.

Like any worker placement there’s a first-come, first-served system. But there’s also passive ways to block. It costs precious florins to visit locations if you don’t get there first. You start by drafting goal cards, which are worth big points. But points – and game-long benefits – can get snatched away if you don’t pay attention to the church. Religion played a monumental part in the Renaissance; ignore it at your peril!

Lorenzo il Magnifico ticks all the boxes for those who love crunchy Euro games. It comes from designers with real pedigree in this heavier bracket of strategy games.

Lorenzo il Magnifico is an engine builder, with a quite distinctive card drafting mechanic. Cards are added to the player’s tableau, and, depending on the type of card, they improve a particular aspect of the player’s engine.

Enter the Houses of Renaissance expansion. I am a big fan of Lorenzo (that was a disclaimer, in case you missed it) – so I couldn’t wait for the UK release of Houses of Renaissance. Instead, I bought a European copy, a few months before it landed on UK shores. As both the base game and the expansion are language independent, this wasn’t a problem.

Elements of the Base Game

So, what does Houses of Renaissance add to the base game? First of all, it’s worth having a reminder of a couple of aspects of the base game. Lorenzo features 64 cards, which are revealed in six rounds (three periods, two rounds per period). All cards appear in every game. Each card has a “type”, which indicates which tower it appears in on the board, where it is played on the player’s tableau, and therefore what benefit it gives.

There are four types of cards – Ventures (end game points), Buildings (which are activated to give points, or enable money to be spent on other resources), Territories (activated to provide resources, including servants) and Characters (which typically give bonuses to specific actions). Cards are drafted by purchasing using a die of a set value – cards higher up the tower require a higher value die.

How much does the Expansion add?

You will be no doubt pleased to know that, although there are a number of additions to the base game, set-up time is barely affected. Houses of Renaissance is more of a set of small, modular expansions, rather than a huge bolt-on, so you could choose not to include everything. However, bringing all in at once really doesn’t affect the complexity much, so using the whole of the expansion will not feel overwhelming. I will discuss each element of the expansion in turn, below.

The Houses of Renaissance adds a fifth tower to the base game. Where Lorenzo has four towers, each with one card type associated with it, the fifth tower is more of a “luck of the draw” tower – cards of all four types could appear on the fifth tower. There are also double the number of cards for the fifth tower; as a result, this changes the fixed format of the base game, so that you will not see the same cards every game.

The Special Tower is the biggest change to the game, since it removes the certainty about which cards will appear in the game. This may not suit everyone, as the additional random element may take the edge off. For me, it gives the game a little more room to breathe. I don’t see it as a vital addition, neither do I think it spoils the game – it just makes it a little different.

Another change is the introduction of the Adaptation Tile. This tile sits alongside one of the old towers, adjusting the die cost of each of the cards in that tower (instead of 1, 3, 5, 7 pips, they now cost 5,6,7,8 pips; less for five players). The Adaptation Tile progresses to the next tower each round. This means that two towers will be hit twice in a given game, so the inclusion of this tile introduces an extra bit of planning necessary to maximise your strategy.

These elements of the Houses of Renaissance expansion perhaps feel the newest of all of the additions, since it adds to the game, rather than extend it. Before the start of the game, a series of Family Tiles are laid out for players to bid on. The Family Tiles each give the owning player an in -game benefit (such as an extra family member, or bonuses for reaching points on the faith track). Each has a random bidding track – a higher bid on a track results in a lower number of starting resources.

The Family Tiles don’t have a huge impact on gameplay, but can extend the duration of the game, depending on how long the auction takes. It’s a nice touch, especially as it means that players may begin the game with entirely different types of resources.

Special tokens are small, one-hit blind draw tokens which can either be used as an additional resource, or provide additional resources (wood, stone, points or even actions) when they are discarded. Alternatively, some of the new development cards on the Special Tower have tokens as a cost, so it may be worthwhile hanging on to them.

A fifth tower means that the base game is opened out a lot – so there is easily more room for a fifth player. A set of additional resource pieces are included, as well as pieces for a fifth player – in shocking pink. There aren’t many games which have pink as a player colour. And in this case, I can see why – it can be very difficult to distinguish the new pink from the red player pieces, particularly in low light. Where the player colours in the base game are already ill-considered for colour-blind players, I would expect that the fifth colour can only make that worse. I would strongly recommend checking this out, if it may be an issue.

There are also a few other additions to the game – more Leader Cards, more Excommunication Tiles – some of which interact with the additional new elements of the expansion.

Final Thoughts on Houses of Renaissance

All in all, I would say that Houses of Renaissance is a very worthwhile expansion. It adds a number of new elements to the game, giving it a bit of a lick of paint and a few new ideas. It’s not a massive overhaul, but it’s better value than just a few new cards to add to the stacks.

It would have been nice to see the inclusion of the (designer approved) single player mode which appeared on BGG almost two years ago. But there is already a lot to include from this expansion.