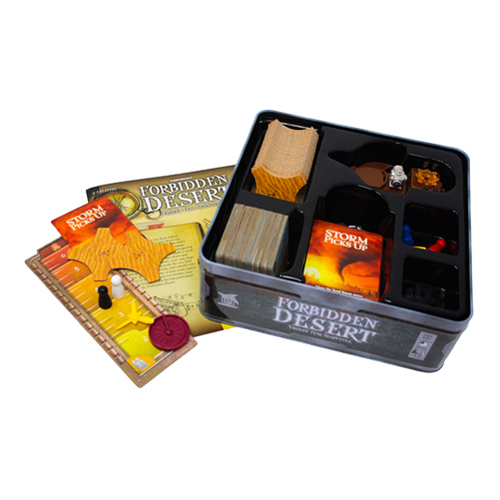 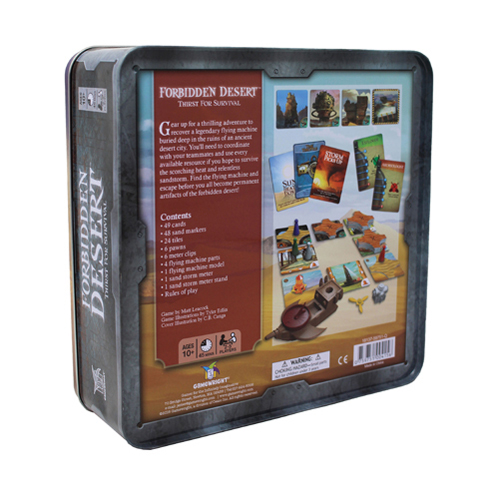 Forbidden Desert is a game of survival from Gamewright and game designer Matt Leacock. Forbidden Desert is a co-operative game where you and your fellow players are searching the desert to recover a legendary flying machine that is supposedly powered by the sun itself. Moments before you arrive a sandstorm strikes your helicopter forcing a crash landing. You are now stranded, and yo…
Read More
Category Board Games Tags BGG Golden Geek, CoiledSpring, Dice Tower, Matt Leacock, Podcast Approved, Value For Money SKU TCS-FORD Availability 5+ in stock
Share
Share this
85%

Forbidden Desert is a game of survival from Gamewright and game designer Matt Leacock. Forbidden Desert is a co-operative game where you and your fellow players are searching the desert to recover a legendary flying machine that is supposedly powered by the sun itself. Moments before you arrive a sandstorm strikes your helicopter forcing a crash landing. You are now stranded, and your only hope is to find the flying machine and escape.

In Forbidden Desert each player takes on the role of an adventurer each with their own special abilities, and each round each player will complete four actions then draw the sand cards to make the sand storm to move and bury the desert that you are trying to excavate.

The actions that a player can take include, moving, removing sand tokens dropped by the storm when it moves, taking a machine part or excavate, meaning you can turn one of the desert tiles over to reveal items or the direction to the locations of the parts as eight of the tiles will point you in the direction of the four flying machine parts making each game different and unique.

There is only one way to win the game, assemble the parts on the excavated landing platform. But there are three ways to lose; dying from thirst, if a player ever reaching the death symbol on their water canteen then the game is lost. Players will have to drink water each time a sun beats down storm card is drawn, being buried - when the storm moves it leaves sand behind and if you cannot place a sand token because you have run out you have all been buried alive. Finally, the game can be lost if you are all swept away, that is when the storm level reaches maximum.

Can you survive the forbidden desert and fly away with the fabled flying machine powered by the sun or will you succumb to the storm, the sand or just thirst?

Imagine being stuck in a desert, the sun beating down, with only a few drops of water left between you. You and your team have crashed and need to discover and unearth parts to build an ancient solar-powered ship. To do this, you need to explore the wide, expansive desert ahead of you. Add to this the impending doom that is a wild storm, making you path impassable with immense amounts of sand and you have a game which challenges you and a team of fellow explores to escape the desert on your “steam-punk” ship before you meet your demise within the sandy dunes of the Forbidden Desert.

Suitable for 2-5 players, the co-operative game Forbidden Desert, created by board game designer Matt Leacock, was released in 2013 and was a much anticipated follow up to Leacock’s game Forbidden Island (2010).

Following much the same premise, players take on the role of one of six available explorers, each with a unique skill to benefit your team and aid in your success. You must work together to uncover parts of the desert to reveal the locations of the four pieces needed to build a ship, shrouded in mystery. In your way stands a storm that is unpredictable and can change the game space and the dynamics massively in just one turn. Overcome this, along with the copious amounts of sand and the beating desert sun draining your water resource, and you will be able to escape on the ship and re-tell your story for years to come. Fail and you will become an ancient relic of the desert.

The game's board is a 5x5 grid made up of tiles, with a space in the middle to represent the storm. Beneath these tiles you will find locations that provide equipment and shelter from the sun, as well as clues to the location of the four pieces needed for the ship. Along with these tiles, eight sand markers are placed upon the tiles in a diamond formation.

Players are assigned a random explorer to take control of, each one with a skill that can benefit the team. Along with this, the card also dictates your current water capacity. This depletes when caught out in the sun and can be replenished using wells or by utilising the “Water Carrier” who has the ability to gain “2” water from a well at any point in the game, even after it has been excavated, a great little skill that also makes you a vital part of the team!

Along with you characters, you will also find equipment throughout your travels that can be found by excavating tiles. Each can benefit the holder and also has the added benefit of not counting as an action. Finally, the storm deck will need shuffling, a deck that is designed to make your journey as difficult as possible! Once this has been set up, the difficulty level on the storm meter is selected and the game begins.

When I played Forbidden Desert for the first time, I think I was rather naïve. The premise is fairly simple; to make your way through the desert, excavating the tiles and ensuring you don’t run out of water and to keep the sand markers to a minimum. However, the game’s mechanic means that so much can happen in a very short amount of time and this can lead to a very interesting game, every time it’s played!

In one go, a player can take four actions, these being to move, excavate a tile, remove a sand marker or pick up a piece of the ship. It’s up to the player to decide but as I found out, especially towards the end, the group will fight to ensure the right decision is made. The game leads you into a false sense of security as you can start off excavating two empty tiles in one go (using your four actions) and this settles you in. But you soon realise that storm is against you and once it starts moving and placing sand on tiles it passes through, those four actions seem to become far too few!

In terms of the storm movement, it is dictated by the “Storm Deck.” After the player has taken their four actions, the storm level will dictate how many cards need to be drawn. As you can guess, this number increases throughout the game, making your job as a team even harder! The storm can move in any direction dictated by the cards, making it completely unpredictable.

Among these movement cards are also cards that are titled “Sun Beats Down” and “Storm Picks Up.” If one of these cards is drawn, it makes the game that little bit harder for you. The sun causes any unsheltered player to lose one water. Sheltered players are protected and won’t lose water, shelter being found under tiles and by using the “Solar Shield” equipment card.

Don’t worry though! If any of your team are getting low on water, you can try and excavate one of the “water” tiles. Be careful as one of the three water cards is simply a mirage! The “Storm Picks Up” card moves the storm level up by one. This eventually leads to you increasing the amount of cards drawn on each “storm movement” thus increasing the chance of getting one the aforementioned cards and increasing the amount of sand in play, which can lead to an untimely demise in the desert.

As mentioned, the goal in this game is to find the Flying Machine parts required to build the ship, move to the landing pad space and finally escape the clutches of the desert. This is achieved by excavating the location tiles that dictate the location of the piece, both horizontally and vertically. Once both have been unearthed, you can then locate and move to pick up the piece and become one step closer to escaping the desert. The storm can play a factor in the movement of the parts as well, as once a location tile has moved, the part moves with it.

So, how does the game play? In my personal opinion, I think the game plays incredibly well. The flow of the game can be fast-paced, especially when playing with experienced players. The storm element adds in that extra bit of uncertainty and allows plans to go wrong, something I like in games. I hate when you can create a game plan from the outset and the game makes no attempt to change it, but Forbidden Desert does an excellent job of this!

The various factors that control the outcome of the game keep players (myself included) on their toes, and I found that when playing different members of the team would monitor these separately. We’d have someone checking the water, someone keeping check of how the storm has moved previously and someone trying to anticipate where the pieces may be and moving accordingly. It forces you to form a tight-knit group and really gets you into the game and this adds to the whole experience!

One element that may detract slightly from the game is the major difference in the explorers on offer. I felt, especially when playing a two-player game, that you would have a very hard time beating the game without the sacred “Water Carrier.” While they all have their perks, I feel that some are little more vital and powerful than others and this can lead to a, sometimes, unbalanced game. This however, makes that game that little bit more challenging which is never a bad thing.

The replay-ability of the game is a definite plus! While it will always follow the same scenario and you begin to understand the game more and more, you will always have a random placement of tiles and a well shuffled storm deck will mean you will have many more great games out of this!

Finally, the best bit of Forbidden Desert, without a doubt, is the fantastic Flying Machine miniature! It looks brilliant and the fact you can add the parts onto it as you discover them in the expansive desert just adds that little bit to the game!

To conclude, this game, while very similar to its predecessor, manages to challenge players that little bit more and absorbs you, as a team, setting about completing your goal and you soon become lost within it. The challenges you face make Forbidden Desert enjoyable and allow it to be played time after time and I really liked the way the mechanics flowed and the different aspects throughout the game influenced the outcome.

A highly recommended game and one that I believe to be an essential addition to anyone’s collection!