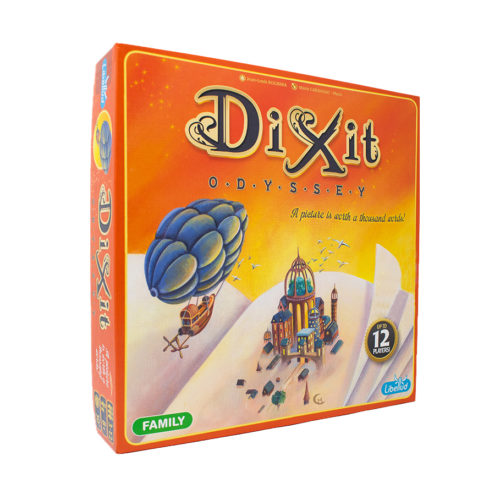 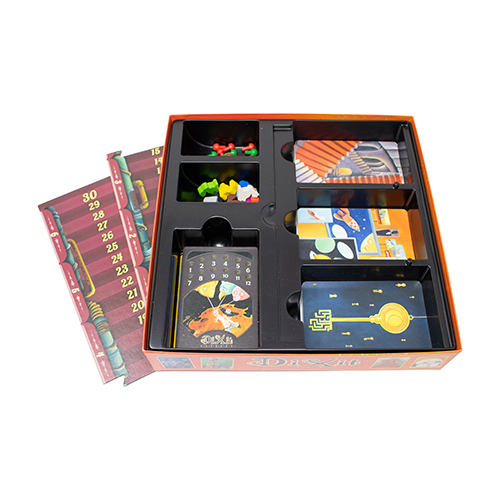 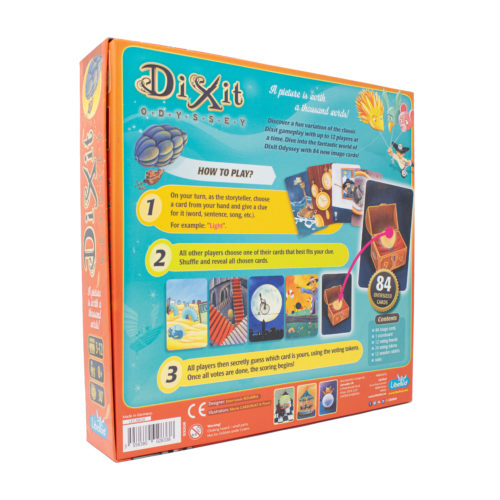 Add to Wishlist
Dixit Odyssey is both a standalone game and an expansion for Jean-Louis Roubira’s Dixit, which won Germany’s Spiel des Jahres award in 2010. Game play in Dixit Odyssey matches that of Dixit: Each turn one player is the storyteller. This player secretly chooses one card in his hand, then gives a word or sentence to describe this card—but not too obviously. Each other pl…
Read More
Category Board Games Tags Best Sellers, BGG Golden Geek, Dixit, Libellud SKU ZBG-ASMDIX03UK Availability 5+ in stock
Share this
90%

Dixit Odyssey is both a standalone game and an expansion for Jean-Louis Roubira's Dixit, which won Germany's Spiel des Jahres award in 2010.

Dixit Odyssey contains 84 new cards, each with a unique image drawn by Pierô and coloured by Marie Cardouat, artist of Dixit and Dixit 2. The stand alone version also includes a folding game board, 6 new rabbit scoring tokens (12 total), and a box large enough to hold all the Dixit cards released to date.

The stand alone version of Dixit Odyssey includes enough components for up to twelve players and also has variant rules for team play and for new ways to play with the cards.

You may already be aware of this game’s predecessor, Dixit, which has won numerous awards for its innovative and easy gameplay, coupled with beautiful and abstract artwork. Dixit Odyssey expands on this as a standalone title, with the main draw as being able to now play with up to 12 players (as opposed to Dixit’s six-player limit).

For those of you who are not familiar with Dixit, the easiest way for me to convey this as a comparison, would be as a family-friendly alternative to Cards Against Humanity (CAH), but one that won’t make your relatives recoil in disgust by your twisted sense of humour. Whilst I enjoy a game of CAH as much as anyone else with a questionable conscience, I will certainly not be getting the game out for afternoon tea at mum’s house, as there are certain thought provoking graphical images involved in that game that one can never take back.

For this reason, I’ve had no urge to return to CAH since discovering Dixit/Dixit Odyssey.

In Dixit each player has six cards in their hand (of the 84 included in the box). Players then take turns acting as the ‘storyteller’ by saying a word, phrase, noise, (interpretive dance?) - basically whatever kind of clue they like - which they feel represents their card.  They place the card face down, and then the other players then choose a card from their hand, which they feel also best represents the clue given by the storyteller.  The cards are then shuffled up, before they are revealed, so to disguise who’s card was who’s.

When the cards are revealed, players secretly vote (using their voting card) on which card they believe was the storyteller's. Now here’s the interesting part, as the scoring applies as follows:

Therefore you need to get creative with not only what clue you give, but also being mindful of which of your opponents are likely to know what on earth you’re talking about. If you don’t know some of these people that well, then just try and steer clear from anything too obvious or mainstream.

For example, if there is predominantly a picture of a clock, you may want to avoid just giving the clue: ‘clock’.  (unless somehow an opponent happens to possess and play a similar card with a clock on it) but even then, your opponents may all choose this card and not yours!

My favourite moment so far, was when someone used the clue ‘Jake Gylenhaal’ when playing their card. Being in the possession of some sort of rabbit/human hybrid beast of a card, gave me a fantastic opportunity. Of course, they could have been referencing anything about Jake Gylenhaal, but to my delight, I had assumed correctly, as they had indeed also chosen a card with some sort of rabbit creature in a reference to the film Donnie Darko. Knowing which of the creepy rabbit cards was mine, gave me a very satisfying opportunity for point scoring.

According to the points scored each time, players then move their cute little rabbit token up the scoring track, everyone replenishes to six cards, and the next person takes their turn as the storyteller.  The game ends, when one of the players reaches 30 points.

How is this Different to Dixit?

The differences to Dixit are few, but worthy enough to own both standalone games in my opinion, especially at this price point.  The key differences are:

Given you are trying to guess the storyteller’s card, in a six-player game you essentially have a one in five chance of guessing correctly. Ramp that up to 12 players, and this would normally reduce your odds to 1/11, which is far from ideal.

In order to combat this, there is a rule variant when playing with 7+ players, where each player receives an additional voting board, so that they can have two guesses each time. In my opinion this is slight overkill with seven and possibly eight players, but you will certainly notice the benefits of this variant as the player count increases.

I have had an absolute blast playing this game, since it is so simple to teach and to play, and the games fly by, meaning even if you lose horribly, you get another chance fairly soon. This also gives you opportunity to try different cards you may not have used before.

It’s a great game to play with family, take on holiday, or even down the pub. It’s a very versatile, fun and simple game with huge replay-ability, thanks to the number of expansions you can buy, enabling you to integrate more and more cards, which ultimately means less repetition. Players will even perceive the same card differently to give unique clues, so even if you keep receiving the same cards, it’s not necessarily an issue, it just means you need to try and be a bit more creative each time.

I would however definitely recommend you to buy an expansion when you purchase either Dixit or Dixit Odyssey, as each time you are increasing your collection by 84 cards, which makes a huge difference, even if you just buy one extra pack.  Given the game is such good value, it is well worth doing.

I chose Dixit Odyssey over Dixit, as the option to have up to 12 players and room in the box for expansions, seemed like a no brainer. I may, however, in the future purchase a copy of the original game, in order to gain another set of 84 unique cards to integrate into my existing game.

I can say that the order I placed was delivered the very next day,and Thats what I call service a fantastic choice of games and gaming equipment will purchase again from ZATU.

I can say that the order I placed was delivered the very next day,and Thats what I call service a fantastic choice of games and gaming equipment will purchase again from ZATU.