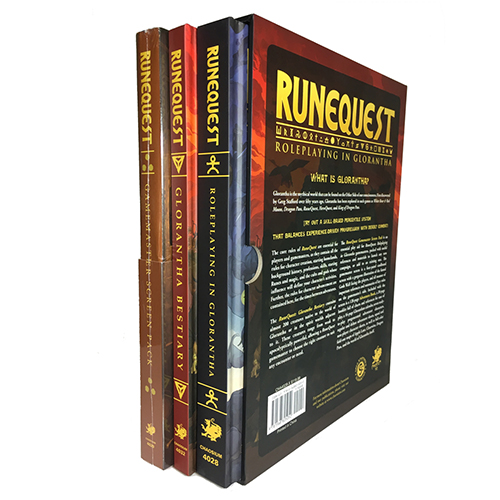 you could earn 8281 victory points

you could earn 8281 victory points

This amazing Slipcase set includes the core three books:RuneQuest – Roleplaying in Glorantha – Core RulesRuneQuest – Glorantha BestiaryRuneQuest Gamemaster Screen PackRuneQuest: Roleplaying in Glorantha is an all-new edition of one of the worlds most influential and acclaimed fantasy roleplaying games. First appearing almost 40 years ago, RuneQuest is as dynamic and vital as ever. This all-new, deluxe edition introduces RuneQuest and its setting of Glorantha to new players everywhere. Try out a skill-based percentile system that balances experience-based progression with deadly combat!RuneQuest – Roleplaying in Glorantha – Core RulesThe core rules of RuneQuest are essential for players and gamemasters, as they contain all the rules for character creation, starting homelands, background history, professions, skills, starting Runes and magic, and the cults and gods whose influence will define your characters activities. Further, the rules for character advancement are contained here, for the times between adventures. RuneQuest is part of Chaosiums D100 Basic Roleplaying system. It is intuitive and easy to play: virtually all rolls determining success or failure of a task are determined via the roll of percentile dice. RuneQuest has no character classes or alignments; characters are defined by their culture, the gods they follow, and the Runes that inspire them. Nor does the RuneQuest system use levels; instead, characters advance in skills and abilities by using them in course of play. Anyone can try to pick a lock, cast a spell, or decipher some ancient runic script. Combat in RuneQuest is exciting, immersive, visceral and always potentially deadly; players should be mindful even the lowliest trollkin can take out an experienced warrior with a lucky blow. Players will want this book to create their unique characters, diving into sorcery, picking their cult, or taking up shamanism to converse with mysterious spirits. Gamemasters need this book, as it contains the core rules for the game, including task resolution, combat, and damage, as well as guidelines for special situations in combat, such as formations and chariots. These core rules are designed to be used in conjunction with the Glorantha Bestiary and the RuneQuest Gamemaster Pack and Screen. RuneQuest – Glorantha BestiaryThe RuneQuest: Glorantha Bestiary contains almost 200 creatures native to the world of Glorantha or in the spirit worlds adjacent to it. These creatures range from weak to apocalyptically powerful, allowing a RuneQuest gamemaster to choose the right creature to suit any encounter or need. Entries are divided into Elder Races, creatures of Chaos, monsters, natural animals, dinosaurs, giant or unusual insects, spirit entities, summoned magical beings, and noteworthy plant types. Another chapter, Terrors, describes the most horrific and powerful entities walking the world of Glorantha, such as the enormous Crimson Bat, the three-bodied Chaos horror Cwim, the Chaos gaggle, and the Fiend of Cacodemon. Each entry is presented in the same format as player adventurers, including attributes, hit locations and armor, weapons and special attacks, skills, languages, magic, and more. Sections in each entry include Myths and History, Subtypes, Description, Culture, Government, Religion, Region of Origin, and more, with adventuring races expanded in considerable detail. RuneQuest Gamemaster Screen PackThe RuneQuest Gamemaster Screen Pack is an essential play aid for RuneQuest: Roleplaying in Glorantha gamemasters, packed with useful references and materials to launch any new campaign, or add to an existing one. The gamemaster screen itself is a landscape, full-color, four-panel cardboard screen, 34 inches wide and 8.5 inches tall, with a gorgeous illustration of the famed Gods Wall facing the players, and all manner of important references and summaries of key rules on the gamemasters side. Included with the screen is a full-color, 128-page Adventures Book. The first half of this book is a description of the Colymar tribal lands, led by Queen Leika Blackspear, detailing the fortress city of Clearwine and its important denizens. Nearby is Apple Lane, a small village beset with huge problems. Its residents and surroundings are described in detail, making it a perfect location for gamemasters to base RuneQuest campaigns in, establishing the adventurers in a renowned yet manageable hamlet with ample opportunity for great adventure. The latter half of the Adventures Book includes three ready-to-play scenarios set in Apple Lane and lands nearby. The first adventure, Defending Apple Lane, pits the adventurers against a savage band of fearsome raiders. Cattle Raid, the second adventure, sends the adventurers to protect a sacred herd of cattle, a seemingly simple task that grows all-too-complex when tribal politics come into play. The last of these adventures, The Dragon of the Thunder Hills, involves dragon magic and old ghosts. Finally, a four-page group of rumors gives ample grist for potential adventure inspiration, and two pages of adventure seeds are ready to be fleshed out into full adventures or run as interesting interludes. Additional materials include a 20-page reference booklet full of charts and references for ease of play, a 16-page full-color Gloranthan calendar, seven ready-to-play pregenerated adventurer characters, regular and deluxe adventurer sheets, squad and a non-player character sheets, as well as full-color fold-out maps of Apple Lane, Clearwine, Dragon Pass, and the world of Glorantha itself.