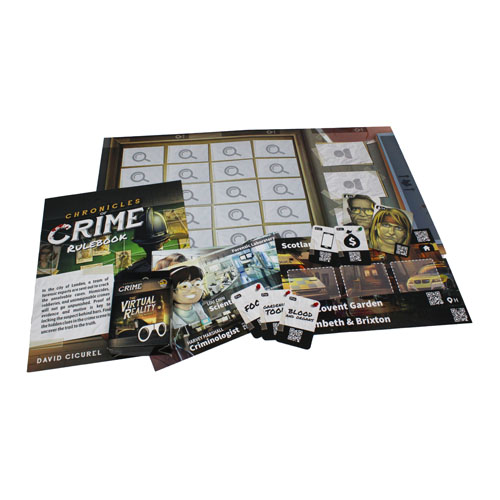 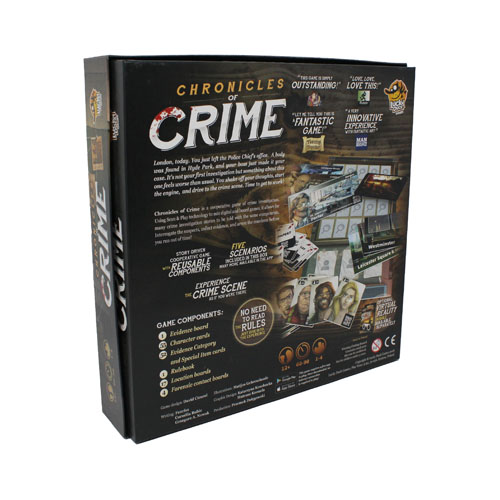 you could earn 2129 victory points

you could earn 2129 victory points

If you have ever thought you could out Sherlock Sherlock, out Poirot Poirot or out Endeavour Morse, then you need you check out Chronicles of Crime. Not only is it an excellent game but it is also a true innovation in the Board Game Industry. Chronicles of Crime (Lucky Duck Games) is set across a number of cases, both single cases and interwoven stories across a number of cases. In …
Read More
Category Board Games Tags Best Sellers, Chronicles of Crime, Dice Tower, Lookout Games, Podcast Approved, Podcast Episode 30, Zatu Platinum Award SKU ZBG-LKY035 Availability 5+ in stock
Share
Share this
90%

If you have ever thought you could out Sherlock Sherlock, out Poirot Poirot or out Endeavour Morse, then you need you check out Chronicles of Crime. Not only is it an excellent game but it is also a true innovation in the Board Game Industry.

Chronicles of Crime (Lucky Duck Games) is set across a number of cases, both single cases and interwoven stories across a number of cases. In the game you have two decks of cards; one is characters and the other is clues, which are split into standard and special types. On top of this you have a central board to store clues that you have gathered during your investigation, location mats where you place character cards that are in those locations, and four specialist character mats. You can consult these specialists for medical, physical and psychological advice, during the case.

All these components have one thing in common - a QR code. That’s because you need a smartphone and an app to play this game. Normally this would put a lot of people off, the mix of technology and cardboard has a checkered past full of potential not yet realised… until now. Chronicles of Crime is a masterpiece of synergised gameplay and design.

Loading up the app for the first time takes you into a simple tutorial case, but don’t be fooled; subsequent cases up the ante and subtlety significantly. Cases will involve you being called to a scene which you can generally examine using the app. This can be done with the separate VR Module attached to your phone, or just through the phone's display. If you are playing with friends you will be frantically be shouting out all the things you see as they rifle through the clue cards to find something that might relate.

Someone else can have a go too, but everything in this game costs time, and time is important with the chief cop demanding you get answers by certain deadlines. Interviews take place by scanning the QR code of characters, you can then ask them about other characters and items by scanning the relevant codes, and moving around the city is done in the same fashion. When you are ready the app will ask you a series of questions to ascertain whether you have solved the case with the correct reasoning or not, and then gives you a score based on this.

Chronicles of Crime is a great game and experience, one that is easy to play and rewards logical thinking. The game comes with plenty of cases and the promise of more through digital content. It is quite unlike most other games, the closest it resembles is the popular escape room games, but it is more than that. For those budding armchair detectives in your life this is a fantastic choice.

I'm stood in the park looking at the crime scene, trying to pick out vital details as quickly as possible and shout them out to my fellow detectives. Anything I miss could prove to be a vital lead to new suspects and locations to examine. My time is up. My fellow detective steps up and immediately finds a bloody murder weapon I've been missing... I blame my glasses...

Detective games seem to be en vogue at the moment, and Chronicles Of Crime, designed by David Cicurel, is Lucky Duck Games effort. A system of cards with QR codes and an integrated app work almost seamlessly together to create a compelling and immersive experience.

Chronicles of Crime is super easy to set-up; you put out the various components, most of which have a QR code on them, turn on the app and start the tutorial. If you have splashed out on the VR module as well, you'll need to keep that handy too. The VR module looks like a small set of glasses but clips on to a normal side phone nice and snugly.

Amazingly, Chronicles of Crime weaves it's narratives with relatively few components. The are 'evidence cards' which you will discover as you go along. These are split into a smaller pile of unique or special clues, and then some general evidence cards, 55 character cards, four police advisers and a sent of envelope sized location mats.

You lay out the components, all of which are numbered for ease of locating in the midst of the a stressful case. Then, you turn the app on and go. The app talks you through everything you need to know and gets you playing very quickly. You will use it and the QR codes each card has to move around London, investigate scenes and interrogate a number of unique characters. There is a simple tutorial mission which gives you a good idea, while being an easy warm up for the main cases.

The app is by and large excellent. There are a couple of places where the grammar made me wonder if it was translated into English from another language and the sound is the weakest part of the app, with only background music playing. The music has no real connection to what is happening striking tense chords at moments of calm and so on. However, the stories that are woven through the app and card combination are memorable and you really feel that you are making choices and having an impact on the story.

The Lion, The Snitch and The Wardrobe

To go to a location in Chronicles of Crime you will scan it's QR code and meet any people there. To interview them you simply scan them and then any evidence or characters you want to ask them about, the only limitation is you cannot directly ask them about locations. Evidence cards have general titles like 'Books' and 'Medicine and Drugs' which actually makes it work really well. Scanning footprints you have found when interviewing someone will reveal their shoe size for example.

If a location is searchable you can do this through the phone just by holding it up and spinning around on the spot and looking all around for evidence. You can also use the VR Module (available separately) for a more immersive experience. This works quite well even though I am a glasses wearer, but sometimes there was a lack of clarity on the screen due to the extra distance my glasses kept my eyes from the screen.

The cases themselves aren't always easy, especially if you miss some key elements meaning a vital location or character doesn't arrive early in the game. This can lead to some stand still moments as you try to work out what you might have missed, who didn't you ask about what? After the first proper case I started employing a pen and paper to make some notes as we went!

To add to the pressure, everything you do in the app costs time. Have to repeat a search or a question? Boom more time gone. Will another pair of eyes be worth it or a massive waste of time? When you think you have enough evidence to solve the case you will be asked a serious of questions and then marked on your answers. The satisfaction of solving a case completely correctly is akin to beating an escape room - it feels like an achievement.

Compared to the escape room games I've played before, I found Chronicles of Crime a much more appealing and enjoyable experience. The logic of the cases is less abstract than some of the puzzles in the Exit games and therefore you always feel like you should have solved something and rarely that something was obtuse or unfair.

The tech works well and I had no problem with scanning unless under very bright lights. And while replay value of each case is low, there is a ton of content and due to the app it is easy to add further cases down the line.

As far as player count goes I think you could play it with a large group, but it works best with two or three players. Most of the action comes through an app so you have to pass the phone or device around. Only so many eyes can help look over the various clues and plot a course of action. Too many cooks and all that...

About a week after playing Chronicles of Crime for the first time I watched Murder on the Orient Express and solved it before that Poirot fella did. That could be because it was startlingly obvious or maybe Chronicles stood me in good stead...

One small word of warning, while you can buy the physical elements of the expansions now, the digital part won't be line until 2019. Meaning you can't actually use them until that goes live.

Bottom Line - Chronicles of Crime is a wonderful blend of tech and board game that creates an immersive and memorable crime saga!