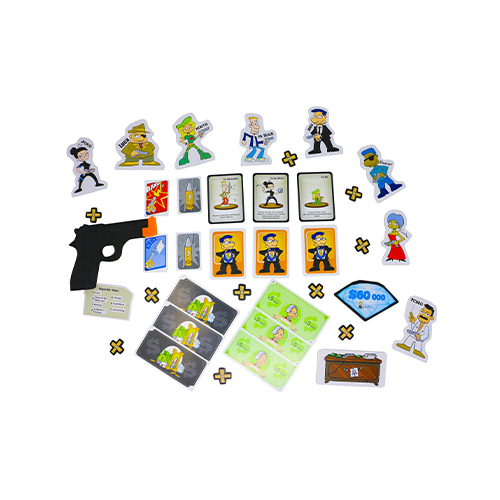 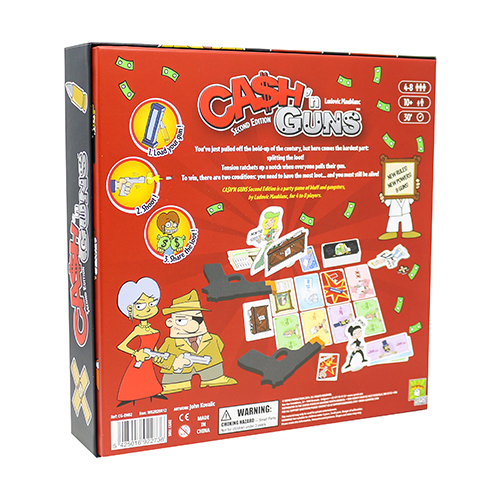 In an abandoned warehouse a gangster band is splitting its loot, but they can’t agree on the split! It’s time to let the guns talk and soon everyone is aiming at everyone. The richest surviving gangster wins the game! Ca$h ‘n Guns helps you relive the best scenes of your favorite gangster movies. The goal is to have more money than anyone else after eight rounds wh…
Read More
Category Board Games Tags Best Sellers, BGG Golden Geek, Dice Tower, Fun For All the Family, Golden Pear, Top 20 Party Games, Value For Money SKU ZBG-ASMCG-EN02 Availability 5+ in stock
Share
Share this
90%

All the fun of a Mexican stand-off full of shifty gangsters in your very own home!

Cash and guns is a bluffing game where you will be pointing foam guns at your friends and family with the aim of getting them to back down so you can take as much loot as you can for yourself. Each round of cash and guns starts with a selection of loot being delt into the middle of the table. Each player then chooses whether to load their gun with a one of their limited bang cards, or to leave it empty. Then everybody raises their weapons and points it at another player around the table. You then have the choice to back down or hold strong. Do they have a loaded gun or are they just bluffing? Anybody who backs down is safe but can’t get any loot. The remaining players reveal their cards and anybody who gets shot has to take a wound and also won’t get any loot. Anybody still standing gets to take a share of the loot. Get shot too many times and you’re out of the game.

There is an element of set collection to cash and guns as certain loot types are worth more the more of that type you have. There are also optional unique roles for each gangster in the box which keeps everything nice and fresh. This is a nice quick game that definitely has some table presence and will have people laughing and joking.

Caah 'n' Guns has a simple gameplay format. Each game is set post heist. Everyone's worked together and got the loot out, and is now safely at the hideout ready to share the goods. Thing is, those in the mafia aren't always great at sharing, and so it becomes a free-for-all. Loot is lined up by the current Boss and everyone loads their guns with a bullet card. It might be a bang, or a click, with the latter being a dud! Trouble is, you only have so many of each... Then the boss counts down from three and everyone points their guns, Mexican standoff style!

The boss may then tell one person to choose a new target, and they count from three again. After this count down, anyone who doesn't want to risk a bullet wound can back down and is exempt from a wound token, and loot. If you get three wound tokens, you are out entirely! Then cards are revealed and anyone who used a bang card gives their target a wound, and the victim cannot take loot. Finally, loot is distributed with the Boss taking first. As an alternative choice, gangsters can take the Boss's token to be the Boss next round. Loot has different values and variations on them, and some cumulatively have more value. The game continues until after eight rounds, when all loot is taken and whoever has the most in value wins!

Cash 'n' Guns should be a top choice for anyone hosting a casual games night. It's a party game of bluffing, getting cash, pushing luck and pointing foam guns at people's heads. In my experience, that makes for a quality evening every time! The game is unbelievably accessible, and it quickly shows how cut-throat you can be.

Like in any heist movie, you're going to have a double cross at some point. The game is socially driven, and it's what is said between pointing guns that will make or break a player. You'll point your gun at someone whilst holding a click card - you don't want to shoot them! However, you have to choose a card and choose a player. You've got to somehow let that player know you might shoot them, knowing full well you don't want to.

Making an enemy is a bad call, and quickly results in a vendetta. You also don't want to make enemies so that you can make enemies later on. Sound weird? Well... You shoot someone early, they know you're a threat and become a target too. You don't shoot someone early, they'll inevitably forget about you and focus on those who are a threat... then BANG! Double crossed! Sort of. It's the intricacies of the social side of the game. On top of that, you need to ensure you're on good terms with most people when trying to be the Boss. Sure, the Boss can make one person change target, but if everyone's after you, you've probably made a judgement error somewhere along the line.

The Boss role of the game is important in multiple respects. Being able to pick loot first is just one of the benefits to calling the shots, but I'd argue it's not the most important! There are multiple reasons why you'd want the little desk in Cash 'n' Guns, and looking like you're straight out of the Godfather is one of them. Theming is never a strong suit of party games with the focus heavily on play and interaction, however the little touch of having an actual desk for your standee makes a big difference!

On top of the looking cool, there's the actual benefits to the desk. First off, being first pick. Easily the most obvious benefit to being the Boss. Because loot isn't as simple as 'have the most cards to get the win', you'll all have your eye on something different. You might be focusing on diamonds, or paintings, or you might have spied a first aid kit to heal a wound. Whatever your jam, picking first is going to help... which is why you'll definitely get targeted by someone. Which brings us to benefit number three! Being in charge. You effectively get a second chance when one person sticks a gun in your face as you can, once only, tell them to aim elsewhere. Sure, the collateral will undeniably hold a grudge, but you need that loot!

As you continue to play Cash 'n' Guns, you'll eventually see the same dynamics unfolding, which is normal. Everyone will adopt a play-style and it may or may not work for them. It's a guarantee in any socially driven game. However, things don't have to be so black and white. The little standees, the characters representing players, all can have variable powers applied to them. Some of these have impact at the end of the game and enhance loot values. Some of these take effect during loot distribution. And some are outright ridiculous, which doesn't make them overpowered, it makes you a target.

We only used powers with players who knew the game through and through. The base game alone vanilla style was engaging and fun enough to be enjoyed a good few games and always produced laughs and enjoyment. Adding powers enhanced that, but wasn't accessible to all players and risked them being alienated or at a disadvantage.

Cash and Guns is a party time favourite for us. Whether we're casually playing or going all in, it's always a good bit of fun! We're yet to meet anyone who didn't enjoy it, and knowing you're able to break the ice with someone by threatening their life if brilliant. What's more is how little you'll care about winning overall. Sure, it's a competitive game and you're forced to focus on the gaining of cash, but that's not what you'll discuss when it's over. What will be discussed is who you shot, who shot you, and the controversies of it all. There are no hard feelings and no animosity, but you'll be desperate to out do your score next time. So kid your clips, know who to shoot, and don't cross the Boss!

If you’re looking for something similar, check out Bang! The Card Game Deluxe Edition!