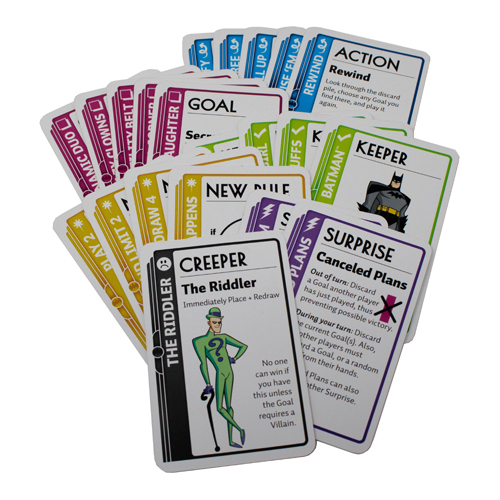 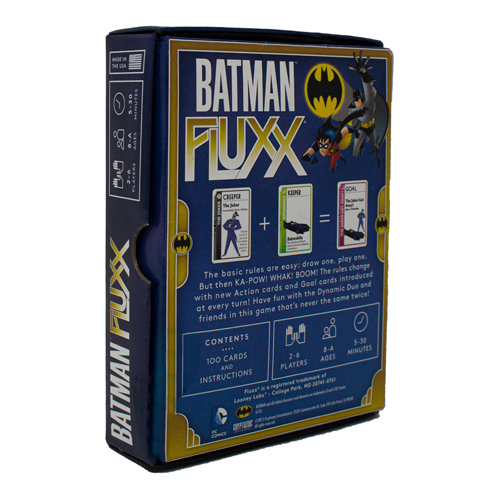 Pay in 3 interest-free payments on eligible purchases. Learn more
Success! We will let you know when this product is available again.
Your email address has been unsubscribed!
Your email address has been unsubscribed!
Notify me when this product is available to purchase!
This email address is already subscribed to this product!
Batman Fluxx, as with all Fluxx card games, starts with one basic rule: Draw one card, Play one card. You start with a hand of three cards, so add the card you drew to your hand, and then choose one card to play, following the directions written on your chosen card. As cards are drawn and played from the deck, the rules of the game change from how many cards are drawn, played or eve…
Read More
Category Board Games Tags 6-8 Years, 9+, Andrew Looney, Batman, Card Games, DC Universe, Fluxx, Looney Labs, Superheroes SKU ZBG-LOO067 Availability Out of stock
Share
Share this
85%

Batman Fluxx, as with all Fluxx card games, starts with one basic rule: Draw one card, Play one card. You start with a hand of three cards, so add the card you drew to your hand, and then choose one card to play, following the directions written on your chosen card.

As cards are drawn and played from the deck, the rules of the game change from how many cards are drawn, played or even how many cards you can hold at the end of your turn. No one can win until a Goal card sets the conditions for winning, which is typically collecting certain Keeper cards in front of you. Goals can keep changing, though, so you never know for sure how to win.

In Batman Fluxx, crime is running amok and no one can win with Villains on the table, so put on your utility belts and leap into the fray to help Batman and his friends clean things up!

Have you ever wanted to condense the world of Batman down to a pocket-sized card game? No? Well your minds work very differently to the people at Looney Labs, who have given him his own card game - Batman Fluxx!

With the debate over the best superhero always raging, Batman remains at the forefront of many people’s minds. His array of gadgets, coupled with a selection of zany villains, make him a personal favourite of mine.

The short answer is that it’s a card game, but I assume you’re reading this for the long answer.

Fluxx is a game based around change. As cards are played, the rules and objectives will change, meaning that any player could win at any time. Designed for 2-6 players, Batman Fluxx takes 5-30 minutes to play.

The game is built around one basic rule: Draw one card, play one card. You’d be forgiven at this point for thinking that this was ludicrously simple game, but when the rules and objectives start changing, things get much more complicated.

At the beginning of the game each player is dealt three cards. There are six card types within the deck, each with their own important function:

A game can’t end without a way to win. Fluxx starts out with no goal in play, so nobody can win until someone plays a goal from their hand. If the conditions of the active goal are met at any time, the game ends and a winner is crowned. However, anyone can play a goal on their turn which replaces the previous goal, potentially disrupting someone’s plans.

One of your plays could be to place a keeper down on the table in front of you. Most goals require a particular pair of keepers (or creepers), so the more keepers you play, the greater the odds of finding a goal that needs them. Nearly all of the keepers have powers that you can use each turn to give you an edge over your opponents. All the keepers can help you win if used tactically, be it the ‘Batarang’ which lets you take a card from the discard pile, or the all-powerful ‘Batcomputer’ which gives you plus one to your draw, play, hand limit, and keeper limit.

Actions are an easy way to help your situation… or cripple someone else’s. They give you a one-time use of whatever it says on the card. Need more cards? Play ‘Jackpot!’ to draw three more. Perhaps you are eyeing up another player’s keeper (or creeper), you can play ‘steal something’ to move it in front of you. Though be prepared for some dirty looks in response.

This is where things can become chaotic. Playing a rule card means that everybody must abide by what it says at all times, until discarded. Often these are simple changes to the draw/play amounts, but other rules really mix up the game. One example is ‘Crime Happens’, which means that anyone with a creeper can steal a keeper during their turn. If you play a rule that contradicts another, the old rule is discarded.

These cards are undesirable (most of the time) and you should aim to discard them quickly through actions or certain keeper powers. If drawn, a creeper must be immediately played, after which you can redraw a card. The concept of a creeper is to stop you from winning, in fact nobody can win if a creeper is anywhere on the table. There are a couple of exceptions to this. If the winning goal requires a creeper, then their adverse effects are nullified. Furthermore, rules such as ‘Elsewhere in Gotham City’ or keepers such as ‘Batman Cuffs’ can help you to win, even if there is a creeper on the table. As you might expect, in Batman Fluxx the creepers are all iconic Batman villains.

You may love or hate these cards depending on which side of the card you are on. Surprises can be played at any time by any player to cancel something that the active player has just done. I have played many different games in my life, but there is nothing more satisfying than laying down a surprise card which cancels out someone’s win. Then again, there are few things more frustrating than having your winning move taken away from you. There are two ways to deal with surprises. One is to keep ‘The Batcave’ keeper in front of you which prevents anyone using a surprise on you. The second is to play your own surprise in return, since surprises cancel each other out.

Players take their turns one at a time, abiding by the current rules. Once the goal has been met without any surprise interference from other players, the game ends. You don’t have to be the active player when you win, as long as your keepers/creepers match the goal.

Would I Recommend Batman Fluxx?

Yes. This is a very enjoyable game that can be played by anyone, from serious gamers to non-gamers. Initially, Fluxx might feel a little daunting as you get bombarded with information about what each of the cards do. I’ve found that some people pick it up better than others, but everyone can grasp it over time as you get used to the gameplay. Batman Fluxx is a great example of a game that is best learnt whilst playing, especially if one of you have played a version of Fluxx before and can walk people through it.

The main why reason why I like Fluxx so much is that it comes in a small box and is quick to play. The small size allows me to take it with me wherever I go with little difficulty. As a university student I find this particularly useful since I move to and fro fairly regularly. If I’m with my friends and we have a short amount of time on our hands then Fluxx is my go-to game. Most games are quick, so it is easy to fit in one or two when pushed for time.

Once you are used to the game you’ll find that there’s a lot more strategy involved than you originally thought. Should I try to discard my creepers or play a hand limit rule to mess with my opponents? Make sure to watch what other players are doing, play surprises at the right time to ruin their plans.

The more people play the better they will get, leading to some quite competitive games. The competitiveness makes you want to keep playing, regardless of whether you win or lose. You’re able to keep playing repeatedly without getting bored because there are so many cards that each do different things, giving the game massive replay-ability.

Batman fans will get the most out of this game. Whether you’re letting the Riddler taunt Batman to meet the ‘Riddle Me This, Batman…’ goal or pairing the Joker with the Batmobile for ‘The Joker Got Away’, this game combines some of the best loved characters in comic books.

If you’re not a fan of Batman, this might not be the game for you. Virtually all of the cards in the game reference the caped crusader in one way or another. While an in-depth knowledge of the Batman universe is not needed to play the game, those who are unfamiliar with the characters or concepts may feel a little out of the loop. However, there are plenty of other versions of Fluxx available to feed everyone’s interests. These range from the Monty Python franchise to the horrifying world of Cthulhu.

As someone who has played many versions of Fluxx, Batman Fluxx is one of my favourites. Not every version includes creepers, surprises, and powered keepers, but I feel that they keep the game interesting for longer. Focusing around the game around the Dark Knight has allowed Looney Labs to introduce some unique concepts, making it worth purchasing even if you have other versions. I am always looking forward to the next time I can give this game a go.

With villains running amok, will you gather your gadgets to help clear up Gotham?