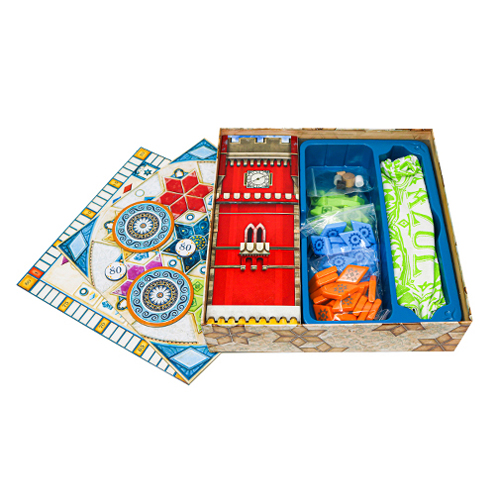 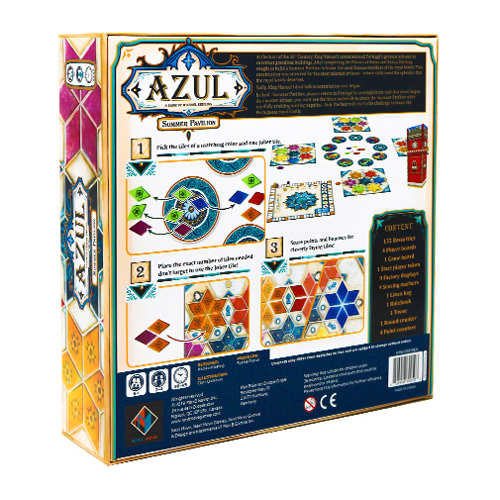 you could earn 2849 victory points

you could earn 2849 victory points

At the turn of the 16th Century, King Manuel I commissioned Portugal’s greatest artisans to construct grandiose buildings. After completing the Palaces of Evora and Sintra, the king sought to build a summer pavilion to honor the most famous members of the royal family. This construction was intended for the most talented artisans  whose skills meet the splendor that the roya…
Read More
Category Board Games Tags Azul, Best Sellers, Golden Pear, Next Move Games, Value For Money, Zatu Platinum Award SKU ZBG-NMG60050EN Availability 5+ in stock
Share
Share this
90%

Azul is a gateway game juggernaut. From its first iteration to this third entry, the game exudes tactile beauty and gameplay. It’s quite incredible that a game based on such a simple drafting systems has made such an impression. In fact the drafting has remained exactly the same in each game, but the use of the tiles has changed.

Part of the charm of Azul is the tiles. This time they are awesome diamond shaped ones which you use to build flowery type patterns. Drafting, the mechanic of picking your tiles from an open selection, is done in a simple way. To set up a number of cardboard coasters (technically factories but they look like coasters!) dependant on player count. At the start of a round four random tiles are placed on to these coasters. On your turn you take tiles from one of the coasters as long as they are all the same colour. The left over tiles are pushed off the coaster into the middle. As soon as there are tiles in the middle players may take from there instead.

In a new wrinkle one tile colour is designated ‘wild’ each round and if you draw from the middle or a coaster while there is a wild tile available you must also take one wild tile too. After the tiles have all been drafted each player will take turns adding the tiles to their player boards obeying the placement rules.

Wilds are important here as you can use them to boost your reserves and get tiles placed that you may not have done otherwise. Complete certain spaces and patterns and you will access so bonus tiles which help you fill in even more of your player board. Simple to understand but not without depth it’s another home run for the Azul franchise!

Azul: Summer Pavilion is the third game by Michael Kiesling in the Azul trilogy produced by Next Move Games and it’s a very welcome return to form following Azul: Stained Glass Windows of Sintra.

Azul: Summer Pavilion lasts six rounds and in each round players draft tiles before placing them on their individual player board in order to score points. The player with the most points at the end wins - very simple… or is it?

A great new twist to the game is that each one of the six colours of tiles is ‘wild’ during every round, adding an extra layer of game planning to an already big thinker of a game. Top tip: looking ahead at the wild tiles and the upcoming wild colour is essential!

At the start of each round, tiles are drawn at random from the bag to refill each of the five, seven, or nine factories and hold four tiles on each. These tiles are as colourful and lovely as the original Azul one’s and thankfully less like the spangles (sweets) they gave us in Azul: Stained Glass Window of Sintra.

Next, you need to draw tiles as needed to refill the ten bonus supply spaces on the central scoring board and set the wild colour marker for the round on the track and then – let the game begin!

At the start of each round, players take turns drafting tiles. Fans of the original game will recognise the drafting mechanism as it is virtually the same. You can choose to take all of the tiles of any one colour on a factory and place them next to your board; if any wild colour tiles are on this factory, you must take one of them. Any tiles left over get discarded into the centre of the table. If you are picking up all the tiles of a wild colour – that’s all you get.

Alternatively, you can take all tiles of a non-wild colour from the centre of play; you must also take one wild tile, if present. However, there is a penalty. Although you can collect the first player bonus (yay!), you also lose -1 point for every tile you pick up (boo!). So timing is everything. You not only have to prioritise when you make your moves but also try and predict what tiles the other players will take.

This game may look pretty on the table but it can be a nasty game if you play with ‘friends’ like we do, who like to ‘hate draft’ and screw us over by deliberately taking the tiles we need or leave us in a position where we have take the coloured tiles that we didn’t need! This can be a turn off for some, but we have found that as the game continues, players are usually more concerned with maximising their own points rather disadvantaging others.

Once you have taken tiles, unlike the two previous games of Azul, all claimed tiles are not placed immediately onto your board but are placed to the side of your board until all of the tiles have been claimed from the factories and the overflow area in the centre. After all tiles have been claimed, players then take turns placing tiles on their individual boards – the person who collected the first player token going first.

Here is the most frustrating part of the game for us, as every other player has to wait their turn to place tiles so it can take quite a while for each person to think about what they want to do and then to place tiles. So be warned: if you don't like waiting between turns or don't like feeling the pressure of having to speed up, then maybe this is not a game for you.

Each player board depicts seven stars that are composed of six tiles; each space on a star shows a number from 1-6, and six of the stars are for tiles of a single colour while the seventh can be made up of one tile of each colour.

To place a tile on the yellow 3, for example, you must discard three yellow or one yellow tile as a minimum plus the wild tiles from your tile collection, placing one yellow in the yellow 3 space and the rest in the, rather fabulous, discard tower. You score 1 point for this tile and 1 point for each tile within this star connected to the newly placed tile.

Admittedly, we found the scoring mechanism  a little tricky to keep track of, so we found it easier to score each tile we placed immediately because it is possible to score quite a few points each round on each of the stars on your board and we lost track of our scores initially.

There are so many opportunities to score points and bonuses in this game. This game is a giver and offers lots of rewards for careful planning and placement of tiles.

For example if you completely surround a pillar, statue, or window on your game board with tiles, you get an immediate bonus, taking 1-3 tiles from the central supply spaces and placing them next to your board.

We found ourselves trying to take tiles of the bonus colour or a colour of the next rounds wild colour. At the end of the round, you can carry over at most four tiles to the next round; then you have to discard any others, losing 1 point for each tile.

We found this game very addictive and it's certainly in our opinion the best of the three Azul games produced. Gameplay lasts around 45 minutes with two of us but I think with more players it could certainly become a much longer, slower game.

The game is quite abstract but it is beautiful on the table and very tactile and comes with really well made high quality components. It is a very welcome return to form for the designer Michael Kiesling and is in our opinion the best of the three games in the Azul series.

It’s perfect for two players and has great replayability. It’s ideal for new gamers (even my 76 year old mother can play this game!) and we highly recommend it. It’s certainly one for our game collection and will be played a great deal over the coming months.

This is a really well made game, the components are excellent, the player boards are thick cardboard. However, I just wish they had made the scoreboard a little thicker as it's slightly flimsy.

One great fix in Azul: Summer Pavilion is the tower that you place discarded tokens in: it’s a lovely clock tower and is very thick and sturdy unlike the one produced in Azul: Stained Glass Window of Sintra. The game looks fantastic and is very colourful.