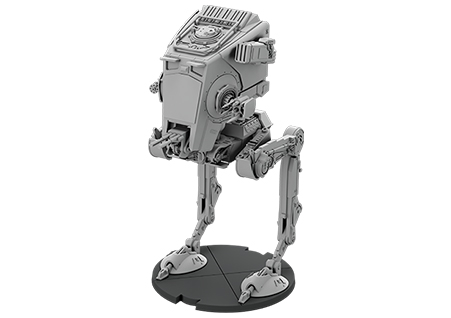 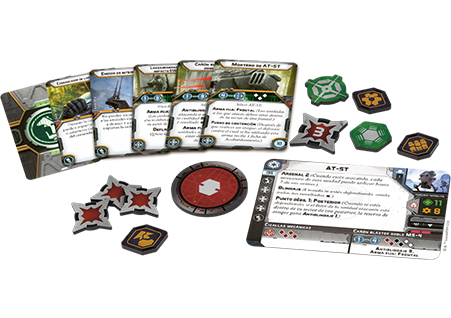 Star Wars Legion: AT-ST Unit ExpansionStar Wars is almost a cultural rite of passage. Parents remember it fondly and enjoy introducing their children to the ‘proper’ films and ignoring some of the newer entries. It makes excellent fodder for board games and a number have been released. Most successful of these is arguably X-Wing. The dog fighting game set in a galaxy far far awa…
Read More
Category Miniatures Tags Fantasy Flight Games, Galactic Empire, Star Wars, Star Wars: Legion SKU ZBG-FFGSWL08 Availability 3+ in stock
Share
Share this

The power of the Empire is visible on any subjugated world—few images are more representative of Imperial power than the shining white armor of a Stormtrooper or the rumble of a walker stomping through city streets or across the battlefield. Soon, you’ll be able to supplement your Stormtroopers with another symbol of Imperial oppression: the All Terrain Scout Transport, AT-ST!
An AT-ST is an awe-inspiring sight to the average foot soldier. It towers above the battlefield, stalking inimically forward on mechanized legs and raining a hail of fire and death from its laser cannons and powerful weapons systems. With the AT-ST Unit Expansion for Star Wars: Legion, you’ll find a single finely sculpted, massive AT-ST miniature, which can be assembled to loom over the battlefield and provide a rallying point for your entire army. Alongside this beautiful miniature, you’ll find an assortment of all the unit cards and upgrade cards that you’ll need to fully integrate the AT-ST into the Empire’s war machine—and your armies.

Star Wars Legion immerses players in the exciting, cinematic ground combat of the Star Wars universe. From the sound of blaster fire echoing across the battlefield to the unmistakable shudder and crunch of an AT-ST walker, appearing from the undergrowth, Legion plunges you into the fierce conflict between the Galactic Empire and the Rebel Alliance.

This two-player miniatures game by Fantasy Flight Games (FFG) is their first foray into the ground combat of the Star Wars universe. Unlike the small skirmishes found in its predecessor game, Imperial Assault, Star Wars Legion gives you a cinematic feel, and full squads appear, ready for battle, alongside vehicles such as speeder bikes, AT-RT’s and AT-ST’s.

As is expected with FFG, the production values are second to none, and the models are detailed and intricately sculpted. With the release of Legion earlier last week, many expansion packs were brought out alongside the Core Set, to complement and further allow more room for army building and customisation.

The Core Set comes with 33 models in total, all of which require some degree of assembly. The pieces of the models do not require removing from sprues, so no craft knife is required for assembly, although some gamers may like to remove mold lines, and clean respectively.

Super glue is a must – unlike Imperial Assault, these models do not come fully assembled, and will definitely need to be securely glued into place. The instructions for assembly in the Core Set are clear and functional. The trickiest models to put together, may be the speeder bikes, but with a bit of time and patience they come together fine.

The sculpts for many of the models are unique in the Core Set. The AT-RT model for instance, is a slightly different sculpt than in the separate expansion pack. Decisions also have to be made as to how to put various options together – the AT-RT comes with three gun choices, one of which must be picked and glued into place.

The Core Game Rules & Round Structure

Star Wars Legion is played over six rounds – and each round is further broken down into three phases; the Command Phase, followed by an Activation Phase, and finally the End Phase. During the Command Phase, each player secretly selects one of their seven command cards that they have brought to the battle, and places it face down on the battlefield.

Each commander (Luke & Vader in the Core Set, but more, like Leia will follow) brings their own set of three unique cards, and these are placed in your hand alongside the more generic cards. The important information on these cards are the pips in the top left-hand corner, and on the bottom of the card, and how many units they activate. Once the secretly selected cards are flipped over, the person who selected the cards with the fewest pips, will get ‘priority’ and be the first to act, and activate a unit in the Activation Phase.

The two players then look at how many units they can activate, and each player designates those units on the battlefield that are within range 1-3 of the commander, and that have not already been activated. A token is placed beside the models to designate this.

The game then moves on to the Activation Phase. During this phase, the person who has priority acts first, either selecting one of the units they designated in the Command Phase, or taking a randomly selected token from the remainder of the troops that are on their team. This is a very clever system, forcing the players to take difficult decisions – do they want to activate one of the troops they have already designated, or take pot-luck and draw randomly and blindly from the pool?

When a unit activates it gets to do two of the following actions – only the Move action can be duplicated – all the rest you can only perform once. The list of actions is as follows:

Moving, as the name suggests, allows you to cross the battlefield with your units. The game comes with three movement tools, and each unit has a specific movement range varying from 1-3. When moving a trooper squadron you move the unit’s leader the designated range, then bring all his fellow troops into cohesion. Vehicle movement is slightly different, in that the tool clips into place with the front base of the vehicle, and vehicles can also pivot and reverse.

Attacking allows you to engage the enemy units. Each unit card designates the range and amount of dice added to your attack total. This can be further enhanced by your army building skills, adding heavy weapons teams to your trooper units, or specific hard point weapons to your vehicles. The dice can roll one of four options; blank (a miss), a hit, a critical hit, or a surge. Some units can convert surges to hits, whilst others cannot.

Once finished you count the amount of hits & criticals obtained, and this is how many wounds you are inflicting. The enemy now gets the chance to roll defence dice for each of these hits, (possibly saving). Combat is obviously much more complicated than this brief overview – lots of other elements can come into effect – such as spending dodge and aim tokens to hinder/aid your own/your opponent's attack, and many weapons have ‘keywords’ which come into effect.

Dodge and Aim actions give you their respective counters, and Aim tokens can be spent to re-roll attack dice, Dodge tokens to cancel incoming hits. Recover allows you to ready all your exhausted cards (heavy weapons such as Imperial Rocket Launchers require re-loading once fired), and remove all suppression tokens.

Card actions enable you to take the action as per specified on the card. Standby puts the unit into ‘over-watch’ mode, enabling the unit to react to enemy movement or attacks. In the end phase, various house-keeping rules come into effect, unused Aim and Dodge tokens for example, are removed from units.

Star Wars Legion really comes into its own when you come to customise your army. In a standard game of Legion, each side gets to spend 800 points worth on troops. You are limited as to how many of the more powerful units you can bring to bear, for example, each side can only have up to two heavy units, the Imperials for example will only be bringing a maximum of two AT-ST’s to the battle.

The mini cards which appear in the Core Set and the expansions, further enhance each unit, you can customise what gear you want to give each unit. Each unit card lists on the left-hand side what gear options you can give them, each slot can hold one mini-card, so you can customise each unit to your preference and liking, do you want it to be anti-vehicle or anti-infantry?

Choosing which leader you want to bring to the battle will be a vital choice. At the moment with the release of Legion, you can only utilise Luke & Vader, but plans are in the works to bring out Veers, Leia and Han-Solo commander packs also. Each commander also has their own selection of Command Cards, which when added to the generic packs, give each side their own uniqueness and flavour.

The only criticism I would have with the army building at the moment, is that there currently isn’t enough choice with the amount and variety of units that can be put into an 800 point army. This will of course be remedied by FFG very soon, with the release of numerous new army option expansions. Rebel Commandos and Snowtroopers are just two of the army choices currently in production, to be brought out soon!

Legion is a brilliant addition to FFG’s vast array of Star Wars games. It is completely different from its cousin game, Imperial Assault. Whilst Assault is more concerned with a few talented heroes, fighting in small skirmishes against Imperial troops, and is very much a ‘dungeon-delving’ game, Legion takes the warfare aspect of the Star Wars universe to an epic scale.

Each of the units in the Core Set feel unique and different. The speeder bikes zip around the battlefield at breakneck speed, whilst the AT-RT’s stomp across the board at a more sedate pace. The commanders are full of detail and uniqueness. Vader slowly makes his way across the battlefield, but you can kit him out with various powerful force powers, including ‘Force-Choke’ and ‘Force-Reflexes’. He really is a formidable presence on the battlefield, and woe betide any unit which engages him in hand to hand combat, as he brings to bear his powerful lightsaber.

Each game of Star Wars Legion will be very different. Included in the Core Set are numerous deployment cards and battle objectives. You will find yourself battling to take key locations, or perhaps to infiltrate your units to the opposing player’s deployment zone.

Star Wars Legion really comes into its own with two Core Sets, and the expansions. Two Core Sets gives you enough movement and range tools for both players, and more than enough dice than you should ever need. With two Cores and one each of the unit expansions, you can field a full 800 point army.

The game is also very customisable, encouraging players to build their own terrain and buildings to bring to the battle (currently the only terrain included in the Core Set are plastic barricades).