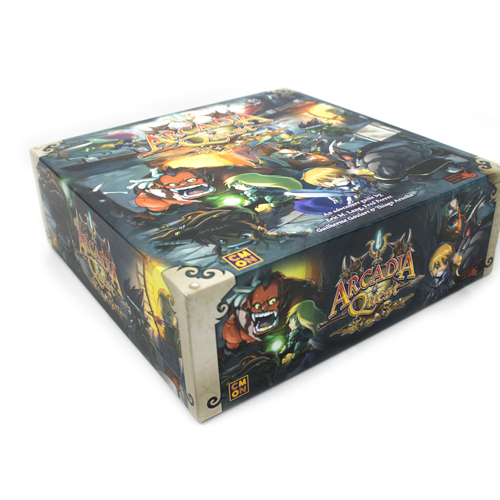 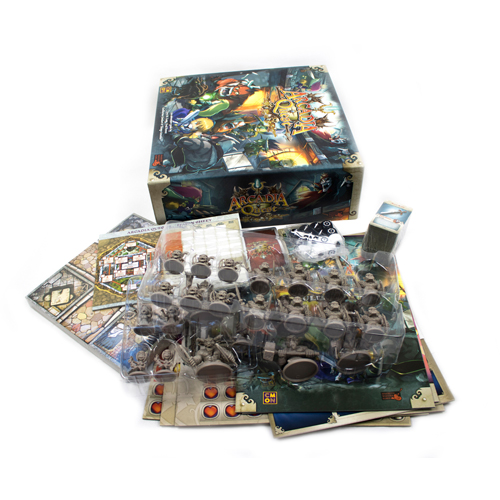 you could earn 7195 victory points

you could earn 7195 victory points

In Arcadia Quest, players lead guilds of intrepid heroes on an epic campaign to dethrone the vampire lord and reclaim the mighty Arcadia for their own. But only one guild may lead in the end, so players must battle against each other as well as against the monstrous occupying forces. Arcadia Quest is a campaign-based game for 2 to 4 players, where each player controls a guild of thr…
Read More
Category Board Games Tags Arcadia Quest, Catalyst Game Labs, Eric M. Lang, Fred Perret, Guilherme Goulart, Thiago Aranha, Zatu Gold Award SKU ZBG-CMNAQ001 Availability 3+ in stock
Share
Share this
85%

In Arcadia Quest, players lead guilds of intrepid heroes on an epic campaign to dethrone the vampire lord and reclaim the mighty Arcadia for their own. But only one guild may lead in the end, so players must battle against each other as well as against the monstrous occupying forces.

Arcadia Quest is a campaign-based game for 2 to 4 players, where each player controls a guild of three unique heroes, facing off against the other players and the various monsters controlled by the game. Players need to accomplish a series of quests in order to win each scenario and choose where to go next in the campaign.

Players are able to choose the path their campaign takes, navigating through six out of eleven available scenarios, so each time the campaign is played it can have a different configuration of scenarios. As the campaign progresses, the heroes are able to acquire new weapons, equipment and abilities that give them powerful options to tackle the obstacles ahead. Furthermore, by fulfilling specific quests in a scenario, players unlock exclusive features in subsequent scenarios.

I remember sitting on the floor in the corner of a board game cafe in Vietnam for hours playing through a campaign of Arcadia Quest, right around the time that I got hooked into the world of board gaming. This was back in 2018 yet this is still a game that hits the table regularly and is adored by both myself and my wife.

It is not generally held in the same esteem as fellow CMON and Eric Lang games like Blood Rage, Rising Son or Zombicide but clearly was popular enough to lead to a re-implementation of the system with Starcadia Quest in 2020. So let us take a look at what makes this game so special.

Arcadia Quest is a competitive dungeon crawl set in a Fantasy Universe. Each player takes control of a guild that is trying to become the most powerful by earning gold, equipment and titles throughout a 6-scenario campaign. At the beginning of the game, you are assigned 3 heroes, each with their own unique abilities and stats. All 11 available scenarios have different layouts, monsters and objectives that need to be completed.

There are two types of quests. First are the Player vs Player ones which require you to kill one of the other player's characters in return for gold. Second are the Player vs Environment type which can be claimed by defeating monsters, picking up items or other specified tasks. These objectives offer titles (granting advantages in later scenarios) and unique equipment.

The scenario is completed once a player has completed 3 quests (2 in a two-player game), then there is an upgrade phase. This is where players use the gold, they have earned throughout the scenario to buy new and better equipment and abilities for their heroes ready to take on the next scenario.

Arcadia Quest has a lot of similarities to other dungeon crawl games like Descent: Journeys in the Dark or Dungeons & Dragons Board Game when it comes to enemy activations and line of sight.

Attacking is simply rolling the number of dice listed on the weapon that you are using hoping for swords or bows depending on the weapon. The defending player rolls the defence die listed on the hero being attacked. If there are more hits than defence symbols rolled, the player takes that many hits. That is a very brief, high-level overview of the game but the rules for the most part are fairly intuitive.

It has a complexity level similar to that of Zombicide but is increased when you add expansions such as Arcadia Quest Pets and Arcadia Quest Riders.

The theme of this game is such a welcome change to the dark and dreary look that a large percentage of dungeon crawlers have. This makes it refreshing and approachable for new players. It's cartoony, vibrant and the artwork just makes the game look fun. Scenarios are also fairly quick. My wife and I can get a 2-player scenario played generally within an hour.

Exploding Dice! I have not yet met anyone who dislikes exploding dice (where a symbol on a die will allow you to roll an additional die time after time). This can lead to those exciting moments where a person does a last-ditch attack with a 1 die weapon and scores hit after hit after hit. It really has led to some stand-up moments that have been remembered long after the game has finished.

The way this game handles deaths is something that works very well. If you are killed in a scenario, you simply return the hero to your board and take a curse token. When you take a rest action they return to your starting area and can be used again throughout the scenario. However, during the upgrade phase, you draw a curse card for every curse token that you have which will potentially hinder that hero in the next scenario.

Turns are simple. On each turn, you pick one of your three heroes to activate. You attack then move or vice-versa. The only other thing you can do is rest to unexhausted cards re-arrange items and bring back killed heroes.

What Is There To Dislike

This is by no means a perfect game and there are some aspects that let it down.

First, is the setup and tear downtime. I don't generally mind spending time to set up a game if the playtime and experience are worth it. Arcadia Quest borders on taking too long to set up. I have genuinely played two-player games where it has taken longer to set up and pack away than it did to play the scenario. When we do play, we generally do so with the caveat that we will play at least two scenarios as this makes it worth the effort.

The way enemies react to you moving around the board I also found to be a bit clunky and unintuitive. This can slow turns down and make the game feel a bit stop-start until you get used to how it works.

Lastly, 3 heroes can sometimes feel like too many and your equipment can be spread too thin. This naturally gets better as you advance through the campaign. I often find myself prioritising just two heroes, in fact, I sometimes don't even equip my third hero with any equipment at the start of the game!

The Inevitable Question Of Starcadia Quest

Now to be clear I do not own Starcadia Quest and have never played it. However, I don't think I could do a full review of Arcadia Quest without discussing its re-implementation. Other than the theme, there were aspects of Starcadia Quest that were changed in order to make it more streamlined. This includes only having two heroes, better replay value for scenarios, campaigns that are only 4 scenarios long and no death curses to name a few.

The way that the scenarios and monsters are set up also makes it more replayable and makes the setup a bit quicker. On paper, it looks like the changes made were more positive than negative. This may well be a smoother experience but that does not detract from how great a game Arcadia Quest is which is why I have not even considered replacing it!

Is Arcadia Quest the best dungeon crawler out there? No. Is it the most streamlined game? No. Is it different from any other Dungeon Crawl game out there? Probably Not. But I love it, I really do. It is just an easy, fun, dice chucker that is a feel-good theme and very approachable.

It's not overly complex either which makes it a good entry into the dungeon crawl genre. It may be 7 years old at this point but still is well worth trying out and remains my favourite dungeon crawl game!