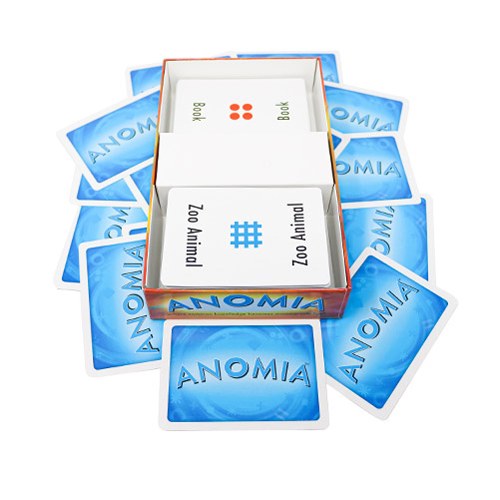 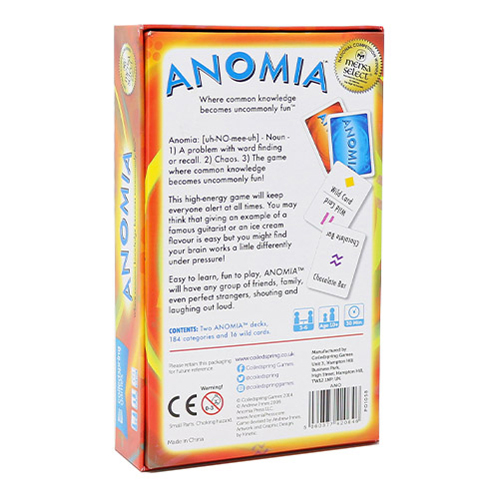 NOW £18.99
Earn 1899 Victory Points
Success! We will let you know when this product is available again.
Your email address has been unsubscribed!
Your email address has been unsubscribed!
Notify me when this product is available to purchase!
This email address is already subscribed to this product!
Normally, it’s easy to give an example of a dog breed or a frozen food – but you’ll find that your brain works differently under pressure. Flip cards until symbols on two players’ cards match. Matching players must race to give an example of the category on their opponent’s card. Whoever blurts out a correct answer first wins their opponent’s card, and drawing co…
Read More
Category Board Games Tags Best Sellers, CoiledSpring, Fun for Kids, Golden Pear, Zatu Gold Award SKU TCS-ANO Availability Out of stock
Share
Share this
80%

Normally, it's easy to give an example of a dog breed or a frozen food - but you?ll find that your brain works differently under pressure. Flip cards until symbols on two players? cards match. Matching players must race to give an example of the category on their opponent?s card. Whoever blurts out a correct answer first wins their opponent?s card, and drawing continues. Sounds easy, right? Think again!

Anomia is a fast-paced, fun-filled, quick game for 3-6 players. It's a great game to warm players up, or to round off an evening of tougher challenges. Anomia will have you shouting random words at your friends and family with much gusto.

Like the game itself, setup is quick and easy. Anomia comes with two decks: blue and orange. Select one and return the other to the box. Shuffle the deck and form two evenly distributed face-down draw piles and you're ready to go!

Anomia's cards have both a symbol and a word. Each player, taking turns clockwise, draws a card from either draw pile and places it face-up on their own personal pile, for the opponents to see.

This continues until two symbols match, with players continuing to add to their pile so only the top card is currently visible.

When a match occurs, the players with the matching cards must attempt to come up with a word or phrase that is reflected on their opponent's card.

Whoever is first wins that card from their opponent and places it on their winners pile.

Pay attention! This may reveal another card that now matches with another symbol in play!

To spice up the simple gameplay, there are also Wild Cards in the deck. These Wild Cards, when drawn, are placed in the centre for everyone to see. They show two symbols, and whilst they're in play the two symbols are now also considered 'matching' symbols.

Wild Cards do not leave play. However, should someone else draw a new Wild Card, that replaces the old one. Players also get an extra turn if they draw a Wild Card, so they get to add a card to their pile too.

There are also caveats in the rulebook for things such as ties or repeated words, and a condensed game for three players, so you can choose which game will work best for your group.

The great thing about Anomia is that it's so easy to pick up and take anywhere with you. Its box, whilst bigger than a deck of cards, easily fits into a bag and the game can be played anywhere (except maybe the library; things can get loud!).

The game has an RRP of £12.99 but you can often find it cheaper on Zatu. For such a price it's a fantastic addition to any collection.

For such a light game, Anomia can be great fun, especially with a group of friends. It adds the right amount of pressure to a seemingly easy task, which can have hilarious results.

It’s a simple game with a decent amount of replayability, although if you were to play consistently with the same group of friends answers may become repetitive.

Fast and easy to teach, this game is great for seasoned players, newer gamers and families with children (the game is recommended for ages 10+ but I think younger children will easily be able to grasp the rules and enjoy playing provided they have a decent level of reading).

The game is made up entirely of cards, which are printed on decent stock. The nature of the game means the artwork is simple and effective, but not inspiring. You’re not going to be buying this game for its beauty.

I, personally, love having this little game in my collection. Its speedy gameplay means a couple of rounds generally last less than 30 minutes and it gets everyone chatting and laughing and arguing over answers! Anomia is perfect for playing with old and new friends alike and warms everybody up for the next game! For the price, it’s a steal.