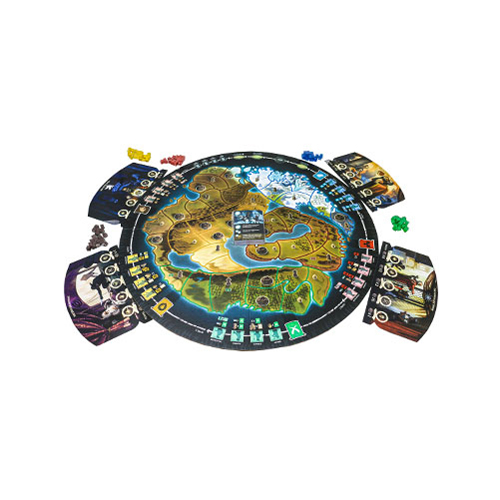 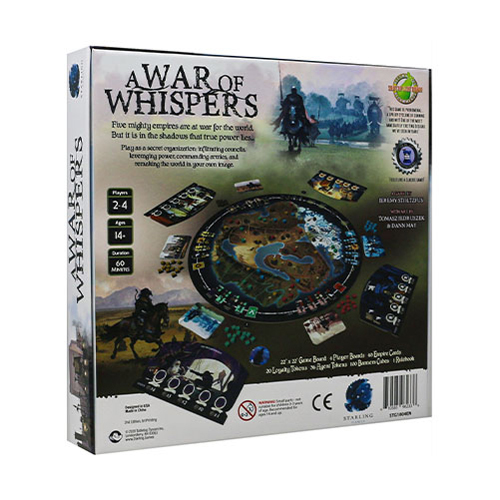 A War of Whispers (2nd Edition)

Pay in 3 interest-free payments on eligible purchases. Learn more
Success! We will let you know when this product is available again.
Your email address has been unsubscribed!
Your email address has been unsubscribed!
Notify me when this product is available to purchase!
This email address is already subscribed to this product!
A War of Whispers reimagines war games and sees you, the player, take on the role of a secretive society intent on changing the course of history by influencing 5 warring factions. Rather than the usual war games where one would control an army, you must instead use your actions and influence to encourage armies to attack, move and advance across the map and monopolise on your alleg…
Read More
Category Board Games Tags Best Sellers, Golden Pear, Zatu Gold Award SKU ZBG-HPSSTG1804EN Availability Out of stock
Share
Share this
85%

A War of Whispers reimagines war games and sees you, the player, take on the role of a secretive society intent on changing the course of history by influencing 5 warring factions.

Rather than the usual war games where one would control an army, you must instead use your actions and influence to encourage armies to attack, move and advance across the map and monopolise on your allegiances to score the most points at the end of the game.

You have varying loyalty to each of the factions and it is important for you to manage this throughout to ensure you maximise your points once the game ends. BE warned though, as once you decide to change your loyalty, other players will see where your loyalties lie and may just be able to take advantage of such information.

Throughout the game, you utilise a unique rotund of actions, with players placing their banners on various different actions that affect the different empires. You can bolster your armies, move them across borders and attack other factions, with the aim of controlling the most land and strongholds, since this will mean more points for players loyal to that faction.

A War of Whispers allows you to play out an accurate representation of Game of Thrones, where spies hold the key to success and actually hold most power in this jostle for control. Be sure to manage your influence wisely and befriend the factions that will yield you most points.

When UK board game reviewers Shut Up & Sit Down review a game positively you know it is going to sell out quickly. Thankfully I was able to snag a copy of Starling Games latest A War of Whispers. Attempting to flip the standard 'dudes on a map' on its head, Whispers doesn't cast you as an army. Instead you play a secretive, shady organisation of behind the scenes meddlers. Does it work? Read on!

A War of Whispers

Whispers is set in a fictional universe where five empires are competing for dominance of the known world. For ease of use these all come in their own colours and with their own favourite animals. Green are technically Elephants but I always call them 'Tuskys' and the horse themed browns I call 'Donks'. Regardless these colours and animals are merely visual assistance to quickly tell what is going on.

Which makes it all the more puzzling why the rest of the game is a little bland. Don't get me, wrong the art isn't bad per se, it's just washed out and muted. This doesn't make a difference on the cards, but on the board it can be hard to locate the three important features. Those are cities, towers and farms. Farms are particularly bad as they are represented by tiny muddy haystacks, which are hard enough to see without up to six cubes clogging things up.

A War of Graphical Design Choices

Speaking of which, let's take a trip to the contents of the box itself. You may know Whispers started life as a Kickstarter. If you didn't know that you sure will when you open the box, and not for good reasons. The insert is awash with empty compartments that are clearly there to house the deluxe version. It's a bit of a kick in the proverbial teeth - especially when the standard components are quite poor.

The wooden cubes themselves are fine and likely better suited to the constant moving about than the upgraded plastic flags. But the punch board is average and not cut neatly, the player boards are flimsy and there is not actually much in the box. In fact your first thought upon ripping off the shrink will probably be 'I paid how much for this?' Despite this, and some up coming gameplay worries, I still love it.

A Gaggle(?) of Whispers

At the start of the game you randomly place five empire tokens face down on your player mat. These are crucial to your score as they tell you which Empires will score you more points for control of cities.

Whispers comes with a round board with the turn resolution helpfully around the edge. It works like this, each player gets 9 agent tokens, during each of the four rounds they will place two of these on to the board to influence one of the empires. In rounds 2-4 you will start by removing one of your existing agents from the board, before adding your other two one player at a time.

Each Empire has a row of four advisors that you can use your agents to influence. Interestingly you also get to influence any of the four advisors to the left that don't have a rival players agent on. This leads to people risking an agent on the far right advisor, and then another player immediate blocking them by playing an agent one advisor left.

A Whisper of Advisors

Advisors will give you one or two actions to choose, including taking cards of that Empire, placing out their banners (cubes), or starting fights. Often these actions are made more powerful by an Empires control over farms or towers. Control is assigned to the Empire with cubes in a region or one of their home regions without any cubes in. Home region borders are helpfully the same colour as the Empire itself.

Then you will move around the edge of the board activating the Empires one at a time. This means that the blue 'flappy wing' Empire will always act first and the brown 'donks' always last. Herein lies my potential worry about long term gameplay - it seems to me that browns always have the advantage. I have played the game around 8 times now and although I'm still not 100% I always think my job easier if Brown is my best scoring Empire.

Each Empires have slightly different actions, leaning towards fights or deployment more. Also Blues have only one city in their home region but start with the most cubes on the board. Browns however have four cities but no cubes.

A Whisper of Wars

Despite this I find myself entranced by the game. The interplay of trying to work out what your opponents are doing works so well. The game plays in under an hour and every choice feels important. Obviously you need to bluff your opponents so they don't torpedo your favourite empires, but unless you grab an advisor in those colours early there is no guarantee you will get one at all.

After a play or two you will understand the importance and power of the Empire cards. Each Empire has it's own deck with three powers on. Each power has a card cost, the first is the card the power is on, but the second two powers require you to discard a second card. The third most powerful action requires you to discard a card of a certain other Empire. So if you want those powers you are going to have to diversify your actions.

Lastly at the end of every round bar the last, you may swap your loyalty between two Empires - but only if you now have those tokens face up. This gives your opponents a lot of information with which to deduce which Empires are move valuable to you.

A Game of Two Halves

So despite component concerns, and replay value worries Whispers is a game I love to play. It is easy to teach and everyone I have played with seems genuinely engaged and into the concept. Even the lack of visual clarity is forgiven due to the exciting and fast gameplay. Some of the best moments happen in the final scoring. You think you have done enough to win, only for the other players to reveal slightly different loyalties than what you had guessed leaving you last place.

The game is littered with fragile alliances as you team up with one player to destroy the blues, whilst fighting with the same player for control of browns cities. While there is no encouragement of table talk in the rules, a liberal dose of deal making and back stabbing comes naturally to the game. The game is most tense when the randomly assigned loyalty is polar opposite but is still fun when you have the same loyalties as other players.

If there does turn out to be a long term 'brown advantage' I think I'd still keep the game as it is sooooo easy to teach and play. In fact that reminds me, I need to go and find some farms, towers and cities to 3D print...