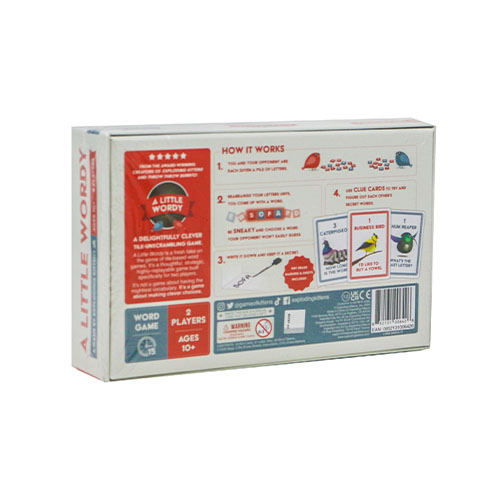 A Little Wordy is a tile-unscrambling game for aspiring geniuses and would-be word wizards. Offering a fresh take on the genre of tile-based word games by focusing on playersâ€™ ability to make clever choices rather than rewarding the player with the biggest vocabulary, itâ€™s a thoughtful and strategic game that challenges players to figure out their opponentâ€™s cho…
Read More
Tags 9+, Zatu Gold Award SKU ZBG-EKWORDCORE1 Availability 3+ in stock
Share
Share this
89%

A Little Wordy is a tile-unscrambling game for aspiring geniuses and would-be word wizards. Offering a fresh take on the genre of tile-based word games by focusing on playersâ€™ ability to make clever choices rather than rewarding the player with the biggest vocabulary, itâ€™s a thoughtful and strategic game that challenges players to figure out their opponentâ€™s chosen secret word.

A Little Wordy is done by the folks who brought you Exploding Kittens. It's quick, simple, and engaging. To win, all you have to do is be the player whose word is worth the most points.

The Berry Tokens are placed in reach of both players.

Behind their player shields, each player looks at the eleven letters they have received and writes down a secret word. Their word can use all or even just one of their letters. But it cannot be a proper noun and it must be spelt correctly.

Once both players have decided on their secret word, they fold down their shield to hide it from the other player. Then both players swap their letters with each other. They now must try to guess each other's secret words.

In order to make this daunting task possible, players can activate a clue card on their turn. Clue cards come in two distinct flavours. Vanilla, which is the safe option, or spicy, involve an element of risk for better information. When a clue is activated, the opponent provides the relevant information then receives the number of Berry Tokens the clue is worth. Berry Tokens are worth one point each at the end of the game.

Once a player thinks they know their opponent's secret word, they can spend their turn attempting a guess. However, if they are wrong, their opponent receives two Berry Tokens, and the game continues.

If a player's word has been guessed and they hold fewer Berry Tokens than their opponent, they lose. If they have the same amount or more, they keep playing until both words are guessed or the other player receives more Berry Tokens.

The player with the most Berry Tokens wins the game.

There's nothing flashy about A Little Wordy, but there is plenty of charm. It plays so fast that it is ideal as a filler between larger games at a game's night but so crunchy and engaging that you always want to play just one more game.

What makes this game stand out from other guessing games is that simply guessing your opponent's word fastest is not the aim. Instead, it's about doing it in such a way as to not give too many points away. Failed guesses are worth more tokens than some clue cards, so you are encouraged to only attempt a guess if you are very sure. It forces you to weigh up whether gifting your opponent four tokens to learn the first letter of their word is a worthwhile trade.

The downside to all this is that sometimes the tiles drawn can provide more options than others. It is hard to say whether this is a problem with myself or the game. In one game I spent five whole minutes trying to come up with something, anything other than the word "bean". My opponent guessed it as soon as he looked at my tiles.

In another round, I was able to use all my letters to form "fabricating". For me, this is evidence that there is a luck element to the game. Some rounds are just easier than others, and that is unavoidable.

These are two extreme examples drawn from at least forty plays of this game. More often than not, it provides a surprisingly thoughtful conundrum for a game with such a whimsical presentation.

The art on the cards in A Little Wordy is drawn by cartoonist Matthew Inman (The Oatmeal), is as delightful as it is abstract. The art itself serves no purpose as each clue has a name only loosely related to the image, to the point where it can be detrimental.

It is unfortunate that the game only accommodates two players. The rules suggest a team variant.

Any game that plays fast and can appeal to everyone belongs in any avid gamer's collection, even if only to serve as an introduction to the hobby. However, this game is accessible enough that even if you don't play games often, you will find time for it.