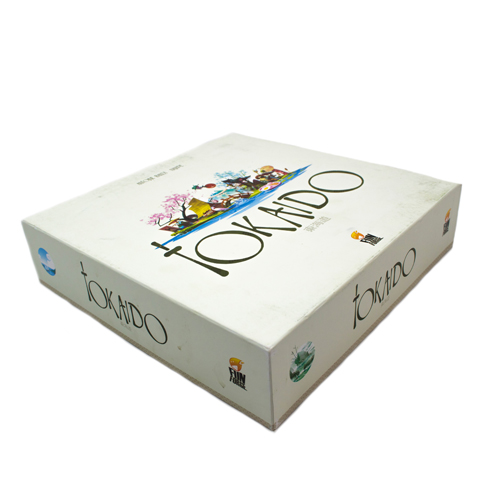 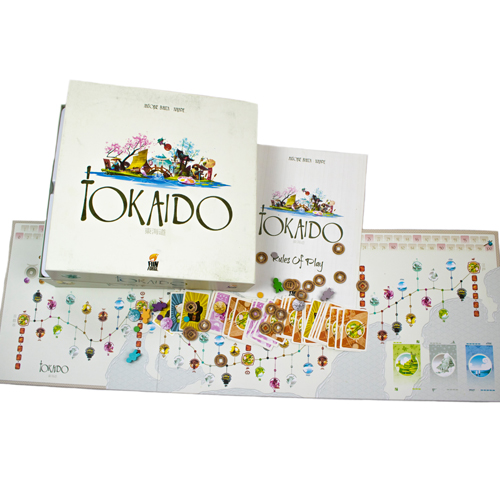 Pay in 3 interest-free payments on eligible purchases. Learn more
Success! We will let you know when this product is available again.
Your email address has been unsubscribed!
Your email address has been unsubscribed!
Notify me when this product is available to purchase!
This email address is already subscribed to this product!
In Tokaido, each player is a traveler crossing the “East sea road”, one of the most magnificent roads of Japan. While traveling, you will meet people, taste fine meals, collect beautiful items, discover great panoramas, and visit temples and wild places but at the end of the day, when everyone has arrived at the end of the road you’ll have to be the most initiated …
Read More
Category Board Games Tags 6-8 Years, 9-11 Years, Antoine Bauza, Tokaido SKU ZBG-FFOTKDUS01 Availability Out of stock
Share
Share this

In Tokaido, each player is a traveler crossing the "East sea road", one of the most magnificent roads of Japan. While traveling, you will meet people, taste fine meals, collect beautiful items, discover great panoramas, and visit temples and wild places but at the end of the day, when everyone has arrived at the end of the road you'll have to be the most initiated traveler – which means that you'll have to be the one who discovered the most interesting and varied things. All of the actions in Tokaido are very simple, and combined with a unique graphic design, Tokaido offers players a peaceful zen mood in its play. Ages 8+, 2-5 players, 45 minutes playing time.

In today’s society, where life can be hectic, it can be difficult to remember to stop and smell the roses. Whilst there is no active rose smelling in this game, Tokaido is a game that embraces this principle.

Tokaido, which roughly translates as the east sea road, which connected Kyoto to Edo (modern day Tokyo), is a 2012 game by Antoine Bauza, and is suitable for 3–5 players. Players can select from one of 10 travellers; each with their own abilities, and must become the broadest minded traveller to be declared the winner. Tokaido does not use dice or directional continuity to determine how far a traveller can move and the order of play. Instead, the traveller who is at the back of their group goes next and can move potentially as far as they would like between Inns.

How does one Broaden their Mind?

In order to be defined as the traveller with the broadest mind, travellers must collect the most amount of points. Points can be earned through visiting five main areas, which I will now explain in more detail:

This is where travellers can purchase items using their coins. Each item can cost between 1-3 coins. Each purchase will give you one point and will have one of four symbols on their card. Purchases are grouped into fours, with each different symbol in your four that does not break the chain resulting in an extra two points.

Travellers can earn either two or three points from landing on these spaces.

Travellers earn one point for each coin they donate, with the most generous player once everyone has reached Edo earning up to 10 bonus points.

These are cards that can have numerous effects, ranging from a free item from the village, to three free coins.

There is one other area that has not been mentioned on the board. The farm. However, whilst this area does not broaden your mind, it does allow you to receive three coins to help pay for the meals and items from the village.

As mentioned earlier, each traveller has their own strengths and weaknesses. For example, Satsuki the Orphan is entitled to one free meal. However, she only starts the journey with two coins, meaning you may want to visit the farm before trying to purchase anything from the village. The travellers that your group are given at the start will determine your initial strategy. As a result, Tokaido has a high replay-ability, as there are many different ways the game can play out before the journey has started based on the selected travellers.

Once all the travellers have reached Edo, the game is over. However, there are several bonus cards that can change the overall outcome of the game. These award bonus points for anything from being the first player to complete a panorama, to spending the most money on meals at the inn.

Tokaido is a beautiful game with some stunning artwork. There are many different travellers and combinations which keeps the game fresh. The gameplay is extremely simple, and for an extra twist can be played across two trips (there and back again).

Having played the game with both extremities of traveller numbers, the game does plays very differently. For example, with up to three travellers, there is only one path for you to follow, and it can feel very linear. This is because you are playing leapfrog with the other travellers, unless they decide to take a risk, giving you a couple of free moves. However, with four or five travellers, some areas allow more than one traveller to occupy the same space, and makes the game a lot more enjoyable and a lot less linear.

The only real gripe that I had with Tokaido was that the board could have been spaced better or could have been slightly larger, especially the scoring area at the top of the board. Likewise playing Tokaido as a fivesome was quite chaotic, as it only takes one of the group to slightly knock a piece and chaos ensues as to who was where.

Overall, I think Tokaido is a fantastic game, and would highly recommend it to anyone.

You Might Like
• The fact that due to the number of travellers and strategies, it has high replay-ability.
• The artwork of the game.
• It is a simple game that can be easily picked up.

You Might Not Like
• The proximity of the pieces and spaces on the board.
• The linearity of games with less players.