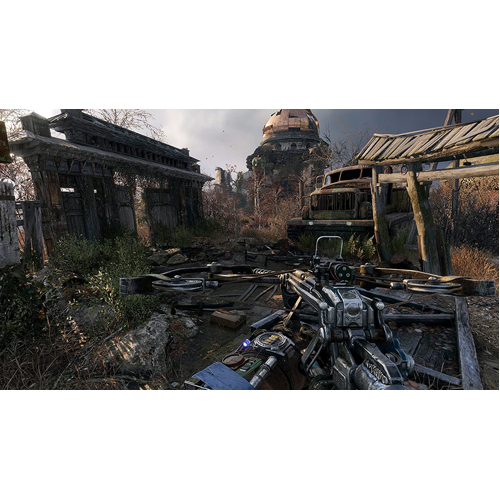 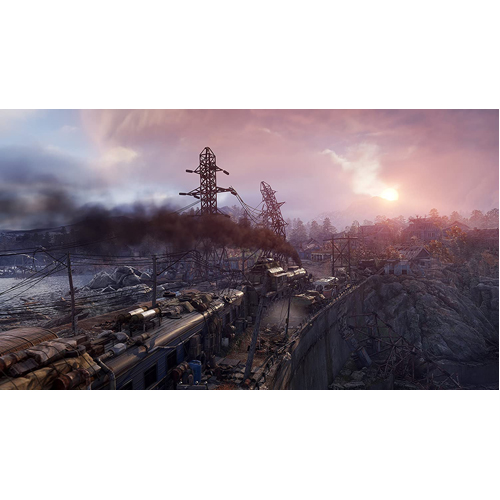 you could earn 2348 victory points

you could earn 2348 victory points

The year is 2036. A quarter-century after nuclear war devastated the earth, a few thousand survivors still cling to existence beneath the ruins of Moscow, in the tunnels of the Metro. They have struggled against the poisoned elements, fought mutated beasts and paranormal horrors, and suffered the flames of civil war. But now, as Artyom, you must flee the Metro and lead a band of Spa…
Read More
Category Video Games Tags Deep Silver, First Person Shooter Video Games, Metro Video Games, Software, Xbox One SKU VKM-DESA21.UK.23DE Availability 3 in stock
Share
Share this
85%

The year is 2036. A quarter-century after nuclear war devastated the earth, a few thousand survivors still cling to existence beneath the ruins of Moscow, in the tunnels of the Metro. They have struggled against the poisoned elements, fought mutated beasts and paranormal horrors, and suffered the flames of civil war. But now, as Artyom, you must flee the Metro and lead a band of Spartan Rangers on an incredible, continent-spanning journey across post-apocalyptic Russia in search of a new life in the East. Metro Exodus is an epic, story-driven first person shooter from 4A Games that blends deadly combat and stealth with exploration and survival horror in one of the most immersive game worlds ever created. Explore the Russian wilderness across vast, non-linear levels and follow a thrilling story-line that spans an entire year through spring, summer and autumn to the depths of nuclear winter. Inspired by the novels of Dmitry Glukhovsky, Metro Exodus continues Artyom's story in the greatest Metro adventure yet.

Metro Exodus is the first above-ground outing for the series by 4A games and remains as atmospheric as ever. This is no generic first person shooter, it’s a post-apocalyptic exploration of enduring relationships, the ties that bind, and how in a cruel and unforgiving world it will be human kindness that unites us.

Metro Exodus kicks off in the familiar and oppressive tunnels of Moscow Metro. Our returning protagonist, Artyom, whose eyes we view the world through, is heading back to base after an unsuccessful mission. He’s quickly set upon by some of the many grotesque creatures that have laid claim to the city and barely escapes with his life... this is one of the more happier moments in the game. Metro Exodus is not a light-hearted caper.

After the first few opening hours our hero and his team find themselves in charge of a train. It’s here that Metro Exodus takes the series in a new direction by introducing chapters dedicated to open sandbox environments.. These aren’t icon-filled maps brimming with a checklist of busy work aimed at artificially dragging out the experience. They are living breathing landscapes with dynamic weather and night & day cycles, which allow for a tactical approach to exploration and combat.

Points of interest are revealed to you through talking with your squad or intercepting radio transmissions. These are entirely optional and can be easily missed if you choose to walk straight past your fellow survivors. Every location contains collectables, valuable upgrades for weapons & armour, and hints at a world that once was.

4A have done a fantastic job with the level design, and the order in which they play out. You start in the snow-covered landscape of Volga, a carefully laid out open sandbox which strikes the perfect balance between exploration and combat. The following chapter takes you to a more traditional linear level, before guiding you to barren, Mad Max-esque open sandbox for the next. This bookend approach keeps the game fresh, forcing you to constantly rethink your approach as well as giving each level a unique feel.

Populating the areas you’ll find the usual post-apocalyptic cultists, cannibals and slavers. Fighting them is also a standard affair, they’ll move to cover, shoot, shout your location to their team and call for back-up. But Metro’s staple of fighting mutated beasts delivers a different style of tension. Giant spiders, intelligent mutants, and lurking abominations strike fear into your heart. Even the harmless spiders that crawl on your arm when you walk through cobwebs increase the terrifying atmosphere. It’s in this state of vulnerability surrounded by dread that Metro shines.

Sadly, combat can be rather frustrating as Artyom is quite a sluggish fellow. Turning and aiming speeds are much slower than the movement of your targets, regardless of sensitivity settings. This isn’t a problem against the wildlife you fight as it adds tension to the situation, but against fellow humans it can become infuriating.

It really is a shame that the combat isn’t an enjoyable experience as the weapons are wonderful and sound beautiful. Each firearm has a roster of modifications that you’ll scavenge from enemy weapons - sights, scopes, barrels - allowing you to control how you want to play. This variety of customisation turns a pea-spitting shotgun into a four-barrelled death stick, which leaves satisfying smoke plumes in the air after each squeeze of the trigger.

You’ll also find resources to craft medikits, filters, and ammo, as well as maintain weapon condition, which adds a level of gear management.

As with previous Metro titles there is a hidden morality meter, which encourages you to be kind and caring where you can. Knocking out an opponent rather than shooting them counts as a good deed. And in Metro Exodus, although it may not be immediately clear, good deeds don’t go unrewarded.

For instance, in one level you’re tasked with opening a gate in an enemy base to allow the train carrying survivors to escape. Artyom and his team sneak into the base under the cover of darkness. Once inside I make the decision to not kill anyone, partly down to the aforementioned sluggishness. Artyom makes it to the gate controls, which is also where the leader of this enemy camp is giving a speech. We get the jump on him, he surrenders and we negotiate. Thanks to my non-lethal actions against his people, he tells his army to clear the path and let us through without bloodshed. We lower our weapons, the train comes through, the leader calls us soulless heretics (cheers mate) and we escape.

This time around the story is less centred on Artyom - who, once again, only speaks during loading screens - and unfolds in a much more personal fashion. Paranormal plot points have been removed, allowing for a more grounded story about sacrifice and love.

The best parts of the story are found aboard the Aurora, the train that functions as headquarters and your safe haven. Here you have the opportunity to explore the endearing personalities of your crew. Characters are brought to life with almost endless amounts of dialogue, but because these moments are so charming, you’ll want to listen.

Anna, the team’s sniper, shares her thoughts about the life she hopes to build with Artyom as she rests her head on his lap. Damir’s commitment to his heritage gives insight to his motivations. Stepan, the big softy, fills the air with his acoustic guitar. And Miller, the hardened leader, shows the tough love of a father figure who wants the best for you and his daughter Anna.

They’re in the Walls Man!

Unfortunately there are a few bugs that hinder the enjoyment of Metro Exodus, they aren’t game breaking but they certainly are annoying. The main issue is load times, it takes over two minutes to continue your journey and an additional minute for every time you die and need to reload a checkpoint.

In the desert you’ll find a car, opening your map while inside annoyingly causes Artyom to stand up, preventing your from seeing where you’re driving and forcing you to exit & re-enter the vehicle.

The game also has a tendency of creating checkpoints at exactly the wrong time. The worst being a checkpoint creation just as I fell into the jaws of a giant beast, forcing me to restart the level.

When approaching enemies for a silent takedown it takes far too long for the prompt to do so to appear. Also, during heavier combat sections you will find yourself strafing back and forth to dodge bullets while waiting for the prompt to appear. Potentially a one-off occurrence but in my playthrough the ability to knock-out opponents disappeared entirely and stopped me from obtaining two trophies/achievements, speaking of which...

Metro Exodus gives you an open and dangerous world unbound by tunnels. But it is in those familiar dark tunnels the game excels and brings back the sense of vulnerability and terror. Wonderfully realised weapons are somewhat wasted and combat becomes a chore due to slow movement and aiming. The story of love, friendship and sacrifice within the safe confines of the Aurora with your charismatic crew is where the game truly shines.