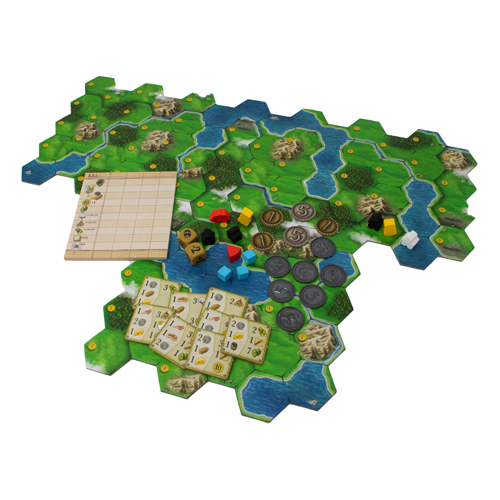 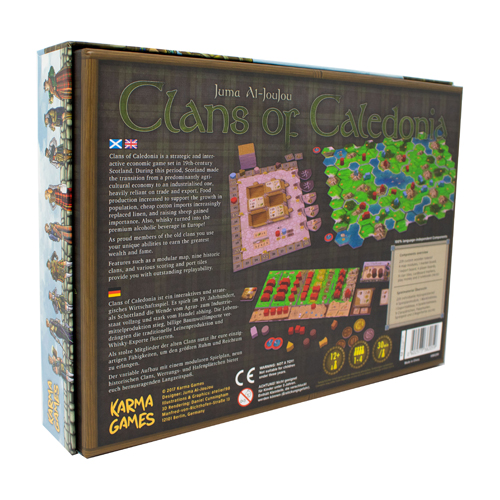 Pay in 3 interest-free payments on eligible purchases. Learn more
Success! We will let you know when this product is available again.
Your email address has been unsubscribed!
Your email address has been unsubscribed!
Notify me when this product is available to purchase!
This email address is already subscribed to this product!
Clans of Caledonia is a mid-to-heavy economic game set in 19th-century Scotland. At this time, Scotland made the transition from an agricultural to an industrialized country that heavily relied on trade and export. In the following years, food production increased significantly to feed the population growth. Linen was increasingly substituted by the cheaper cotton and raising sheep …
Read More
Category Board Games Tags BGG Top 100, Clans of Caledonia SKU ZBG-KARCLOCA01 Availability Out of stock
Share
Share this
95%

Clans of Caledonia is a mid-to-heavy economic game set in 19th-century Scotland. At this time, Scotland made the transition from an agricultural to an industrialized country that heavily relied on trade and export. In the following years, food production increased significantly to feed the population growth. Linen was increasingly substituted by the cheaper cotton and raising sheep was given high importance. More and more distilleries were founded and whisky became the premium alcoholic beverage in Europe.

Players represent historic clans with unique abilities and compete to produce, trade and export agricultural goods and of course whisky!

The game ends after five rounds. Each round consists of the three phases:

1. Players take turns and do one of eight possible actions, from building, to upgrading, trading and exporting. When players run out of money, they pass and collect a passing bonus.

3. Players receive VPs depending on the scoring tile of the current round. The game comes with eight different clans, a modular board with 16 configurations, eight port bonuses and eight round scoring tiles.

In the 19th century, Scotland transitioned from an agricultural nation to an industrialised one. In Clans of Caledonia, players help this transition by producing food, livestock, and processed goods. They then use these goods to meet export orders and win the game.

This description would suggest Clans of Caledonia is a complex game, and while this is true, it is not too complex that it wouldn't be fun. As a moderate to heavy euro-style game in the vein of Terra Mystica, Clans of Caledonia has a fair bit of meat on its bones for such a small box. If you like fairly complex economic games, then this game is for you.

Clans of Caledonia revolves around a multi-sectional board which can create a varied game experience on each play. The board, once placed, tries to simulate Scotland; with Lochs, rivers, grasslands, mountains and forests. Each player begins with two workers, either woodcutters and miners, somewhere on the board. These workers can only be placed on an appropriate resource tile and are one of the many ways to earn money in the game.

When expanding a clan, new facilities must be built either adjacent to existing locations or within shipping range. This shipping range has several levels; the first simply pertains to building across a river. Ranges beyond this are the number of water body tiles that can be crossed, although building a distance along rivers is not allowed. Building next to another player’s building gives the option to buy resources produced there at a cheaper rate. If this is planned right, it can be a useful means of buying these items during the game.

The main reason to expand your clans is agriculture. Fields can grow crops of wheat and farms breed sheep or cattle, which produce basic goods. Some basic goods, milk and wheat, can be further processed by buildings, into cheese, bread and whiskey. The game even allows the butchering of farmed animals for their meat, if that's your thing.

But all of this growing, processing and slaughtering must be for a reason, and that is where the export goods system comes in. Each round, a range of contracts are available, although most clans may have only one active at a time. These contracts can be filled with a mix of goods, basic and processed, to gain money, bonus actions, victory points and rare imported goods.

Clans of Caledonia has an inventive trading system. A clan sends their merchants to either buy basic or processed goods, or to sell their excess goods. This is a great way to earn extra money. Buying and selling goods will cause the market value of the goods to move depending on demand. Buy goods, and they grow more expensive, sell goods, and likewise, they become cheaper. Clever use of this market can help your clan while hindering the other.

At the beginning of each game, player’s select a clan based on its abilities. Each of these abilities is unique and can push players into different strategic directions. One clan builds processing buildings cheaper than the others. Another builds facilities at a discount where rivers meet the various lochs on the board. A third can even age whiskey and earn extra income from it.

In all, there are six unique clans in the base game, for a good amount of replay-ability.

Clans of Caledonia - A Winner!

Clans of Caledonia is a game of many mechanisms, which is common for games of this weight. But it's how they work together to build a game rich in decisions and planning that just works for me. By growing the clan’s monetary resources in just the right way to meet the clan's needs, and building in the right places is what makes it fun. I enjoyed setting a plan in motion early in the game to watch it progress and payout at the end.

But it's not just the mechanisms; it's the smoothness of play that is enjoyable as well. This and the fact that such a heavy game can be played in less than two hours is a winner for me.

The only downside I can see for this game is that it might be a little complex for some. The myriad of pieces are also a little small and sometimes similar, especially the animals. But neither of these is enough to hurt the game in my opinion.

Overall Clans of Caledonia is a definite winner for me. I enjoyed it so much I would consider it my number one game of 2017.

Don't forget that have the Premium Edition of this game available, which includes metal coins and an exclusive sleeve.