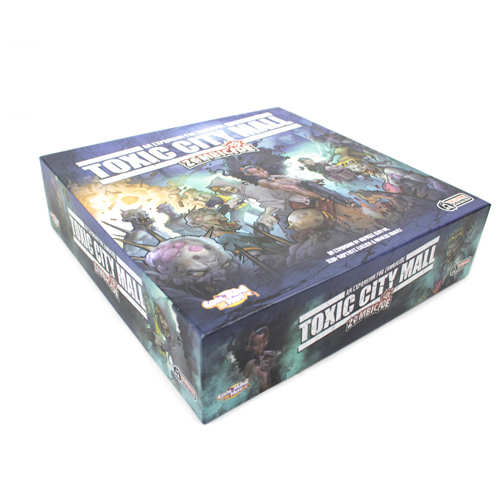 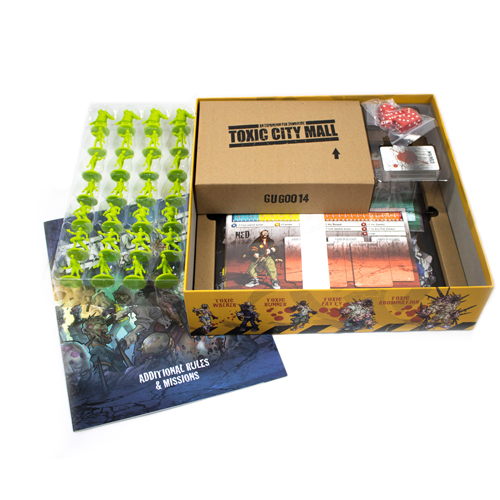 Zombicide: Toxic City Mall is an expansion set for the hugely popular Zombicide series, a collaborative team game pitting a group of plucky survivors against endless hordes of mindless, shambling creatures in a post-apocalyptic setting.

I have been playing the main Zombicide set for some time now and have always been impressed with it – a game that’s been easy to pick up for the varied groups of people I have roped into playing it, from hardened gamers through to newbies (My mum for example – ‘Is it like Cleudo?’ she asked, peering myopically at the box. No Mum. It’s not.) and yet with its random nature has kept my group of regular players and I returning for more.

After rattling through the original levels several times and usually having varying degrees of success, Toxic City Mall was the natural progression to keep the zombie-killing party going.

First things first, you will need a copy of one of the main sets (Zombicide, Prison Outbreak, Rue Morgue) to add this little lot to, and opening the box I was as impressed as usual by the contents:

The figures are, as with every Zombicide set I’ve seen so far, well sculpted and suitably characterful, brightly coloured to be easily recognised on the board for those who do not wish to paint them up.

The figures are, as with every Zombicide set I’ve seen so far, well sculpted and suitably characterful, brightly coloured to be easily recognised on the board for those who do not wish to paint them up.

The spawn and equipment cards are still small. So small. Annoyingly small. However the quality of their contents is the main thing and those of you not cursed with clumsy sausage fingers will probably have no issue at all, other than admiring the excellent artwork and plotting how best to use the new weapons against the undead masses.

The new rule book offers up 10 new missions, seven of which are designed for use with the Zombicide Season 1 box, and the remaining three with the Prison Outbreak set. The split does seem unfair, and anyone buying this set to add to Prison Outbreak should be aware that only three of the levels are designed specifically with that set in mind, and it probably should outline this on the box.

I’d have preferred to see a fairer split between both the sets as it is marketed as an expansion for both. Although the contents are compatible with the Rue Morgue set, there are no specific levels in the rule book for that base game.

Zombicide: Toxic City Mall offers a pretty wide range of additions to the original gameplay. Firstly, the zombies included are, not surprisingly, toxic variations of the originals and therefore best dealt with from a distance. I found this to be a game changer in terms of altering the way I dealt with zombies, as my usual favourite tactic of blazing into melee combat with a chainsaw suddenly became a very poor option.

Next we meet four new survivors with their own sets of skills and quirks, very welcome additions which I found hugely entertaining in the first few levels and a refreshing addition to the roster. Toxic City Mall also brings in a brand-new type of beast – the Zombivor – infected specimens of the survivors both from this box and the original set who, although well down the path to zombihood, have retained their free will and continue the fight.

Playing with Zombivors was a lot of fun. They are slower to level up than their uninfected counterparts but make up for it by being hard as nails. Resurrection mode gameplay allows your dead survivors to continue as Zombivors, which made some of the harder levels much easier and kept more of my gaming group in the fight.

The additional equipment cards are also a blast, offering variety and fun in equal measure. The infinite possibilities for mixing and matching both the equipment and spawn decks in Zombicide means you can play the same level several times with totally different results, which gives great value both for your investment and in play-ability.

The Zombicide: Toxic City Mall set also has several additions to the board in terms of card components – barricades, blocked off areas and rubble piles all added more to the game in terms of controlling the zombies and their routes of attack, and made teamwork and interaction more important than ever.

The final addition of note is the concept of Ultra Red Mode. Players begin a level on the highest tier of experience points and deal with the consequences – huge numbers of zombies spawning everywhere.

Toxic City Mall includes six specialist weapons to help you out, dealing massive damage and making for absolute carnage. Lots of fun to be had here! Ultra Red Mode was an entertaining novelty but to be honest took a little of the enjoyment of character building away for me, but the weapons certainly were awesome to try out.

The Toxic City Mall set is a solid addition to any Zombicide collection. The figures included give you a wealth of extra options for both the new levels included in this rule book and from the previous base sets. New toxic zombies are a pest to deal with and must be battled in a different way to previous foes, and the extra survivors are a welcome boost if the original six were getting a bit stale.

It’s a good looking and well-constructed set, I’d recommend it to anyone looking to make the step on from one of the base sets and introduce several new and intriguing gameplay elements at once. I have found in the past that some expansion packs have struggled to get the level of new rules right – too much and the original game becomes unrecognisable, too little and it just feels like a repetition of the original game but with shiny new models.

Playing through Zombicide: Toxic City Mall offered an interesting level of new elements without detracting from the original game and offered a better gaming experience for their inclusion.