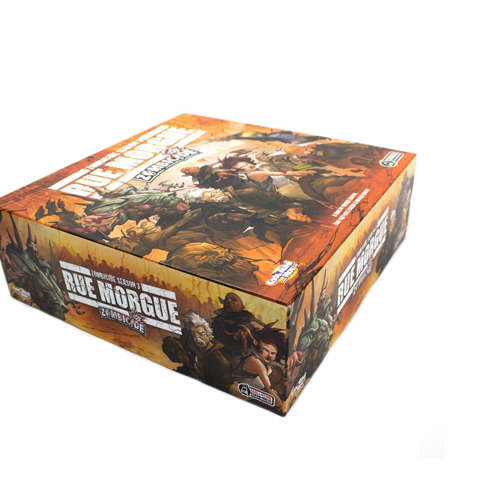 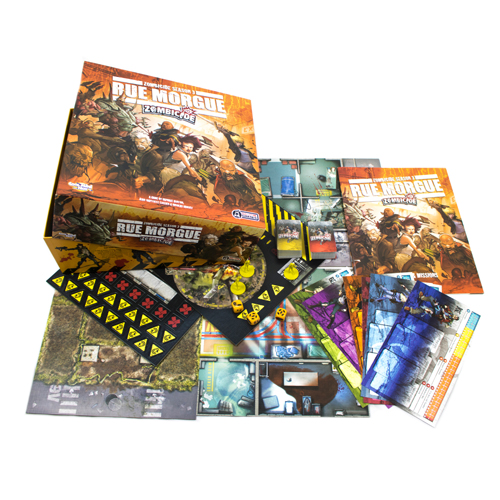 Pay in 3 interest-free payments on eligible purchases. Learn more
Success! We will let you know when this product is available again.
Your email address has been unsubscribed!
Your email address has been unsubscribed!
Notify me when this product is available to purchase!
This email address is already subscribed to this product!
A couple of months have passed since the initial outbreak. You’re a team leader of the Resistance. Humanity and zombies are locked in a war of extinction. Take the lead of a survivor team and harness its members unique skills to achieve victory against the hordes of zombies! The infected creatures are controlled by simple rules and a deck of cards. Play 14 missions on 14 diffe…
Read More
Categories Board Games, Miniatures Tags Guillotine Games, Jean-Baptiste Lullien, Nicolas Raoult, Raphaël Guiton, Zombicide SKU ZBG-GUG0048 Availability Out of stock
Share
Share this
82%

Zombicide Season 3: Rue Morgue is a cooperative game set in an action-movie universe for 1 to 12 players, ages 13 and up. Players control teams of survivors as they fight off a zombie horde controlled by the game itself. Survivors find weapons, battle zombies, and gain experience. The more experienced they get, the more powerful they become, but the more zombies they attract!

Zombicide Season 3: Rue Morgue introduces a terrifying new zombie type: the Skinner Zombie! Make sure you put these zombies down hard, otherwise something might come crawling for you! And don't forget Season 3's new big bad is the A-Bomb Abomination! An Abomination so twisted and mutated that its elongated arms can drag you back to it as you try to escape!

With all these new foes you're going to need to team up if you want to survive!! Zombicide Season 3: Rue Morgue introduces teams into the Zombicide franchise! Players pick from the largest pool of survivors in a Zombicide game yet and form teams to scavenge, loot, and kill zombies! And if you really want to shred through the shuffling dead, you’ll first need to make sure your team has skills that complement each other well.

Zombicide Season 3: Rue Morgue has new zombies, new weapons, new survivors, and even new team mechanics, but the biggest game changer of all is the new optional Player versus Player rule set! Yes, in Rue Morgue players' teams can go toe-to-toe to see which set of Survivors really deserve to survive! If the zombie apocalypse isn't horrifying enough for you, then prepare to face off against the deadliest foe yet: Man!

Zombicide: Rue Morgue is the third season and final standalone set in the Zombicide series, following the original game and the Prison Outbreak boxes alongside the myriad of expansions and additional sets.

It’s a co-operative game for up to 12 players, recommended for ages 13 and above with a basic objective of killing zombies, collecting equipment and staying alive. The more zombies you kill, the more powerful your survivor characters become, and the more powerful your survivors become, the more zombies come shambling, drooling and scratching out of every conceivable hiding place to murder and eat you.

It’s a huge amount of fun, and having played all previous versions I was very keen to see what the third (and final, if we count Black Plague as the new game it is) season would offer to an experienced player like myself. Zombicide: Rue Morgue is compatible with all the other boxes and bits that came before it, offering the committed collector endless possibilities and permutations.

Whilst complimenting the earlier sets, Rue Morgue obviously offers plenty of differences which keep the overall Zombicide atmosphere, whilst in some aspects feeling like a totally different game.

Well, it's packed full. 90 hard plastic miniatures, nine double-sided modular game tiles, a pile of tokens, dice, cards, and survivor character sheets make this a big set. The rule book is the biggest of the standalone season box sets, incorporating not only the basic Zombicide rules but the extensive new rules that are specific to this box.

The equipment and spawn cards are, once again, tiny, but I’ m used to that annoyance by now! My interest was immediately drawn to the tent and helicopter tokens, alongside the ‘Team Action’ cards, and all the contents were up to the very high standard I’m accustomed to from previous boxes from the Zombicide franchise.

All the components are interchangeable with other sets, so the 12 new survivors and a new type of Skinner zombie (more about those horrors below!) will offer plenty of new options for mixing and matching should you already own any of the Season one or two sets.

More of the Same? Or a new breed of Zombicide?

Zombicide: Rue Morgue retains a lot of the elements that have made this series so popular, but also has a few major changes to gameplay. The biggest alteration is the introduction of Competitive Mode, allowing players to control a group of Survivors and play against each other as well as the zombies.

This changes things massively as the co-operative nature of the game has always been at its core, but that doesn’t mean it’s any less fun! Rue Morgue's 14 scenarios can support up to 12 players, and the 12 survivors included in the set are a varied bunch that add plenty to the game.

Having been used to zooming around the apocalyptic maps in cars over the last two seasons, Zombicide: Rue Morgue introduces helicopters to the mix, another exciting twist when you’re desperately fleeing the shambling hordes by racing to the waiting chopper!

Speaking of zombies, a fresh horde of new gribblies are included in the box, and we see the introduction of Skinner zombies alongside the foes from previous sets. Skinners are feral in appearance having been infected for a while, and are relentless in their pursuit of fresh meat. Kill a Skinner, and he might come back as a Crawler, half a zombie that will drag itself along the ground to continue the hunt.

Skinners are a tough foe, but the Abomination in this set is even more of a threat, combining the usual A-Bomb toughness with the ability to reach, grab and drag your survivors around with is freakishly long arms.

The set also includes a new deck of Team Action cards allowing players to better synchronise their Survivors to fight together, and tent tokens allowing you to stash equipment or recover wounds. But remember, zombies can be anywhere! Forgetting that zombies like camping too was the last mistake of many an unwary survivor…..

The huge amount of new equipment cards makes the weapons arsenal available to your survivors truly epic , from good old favourites like the humble pan (Quick Note: If you kill a zombie with a pan, you join Pan Club. Elites only.) to new, more powerful weapons like the AK-47 and the brutal Sabre.

The weapons in game are very similar and limited to degree within the confines of the combat system, but they do allow for a great level of personalisation for your survivors, and everyone has a ‘lucky weapon’ that they just love pulling out of the search pile!

Zombicide: Rue Morgue is a much grander version of Zombicide, catering for larger, longer games involving more players and many survivors. The inclusion of new rules and the Competitive Mode of gameplay does give it a very different feel to the previous iterations whilst staying true to the fantastic random nature of Zombicide that has made it so popular.

Being able to select and field your own team of survivors offers up a new challenge of its own. Choosing a group that compliments each other can be tough, and with the appeal of competing against your friends added into the mix Zombicide: Rue Morgue offers a very different gaming experience.

Overall, it's highly enjoyable and will appeal to anyone with a larger gaming group due to the scale of some of the levels, those in smaller gaming circles wanting to try duking it out against each other, or Zombicide collectors wanting to add more fantastic minis, tiles and tokens to enhance their options on game night.

The player vs player mode is fun, new and offers a brand new element to gameplay. It also will appeal to people to whom co-operative play has run its course, or just to chase down and kill your mates in zombie-infested alleyways for fun. The box is incredibly good value for the contents and with 14 included scenarios, should keep you busy for a while with even an extended gaming group.