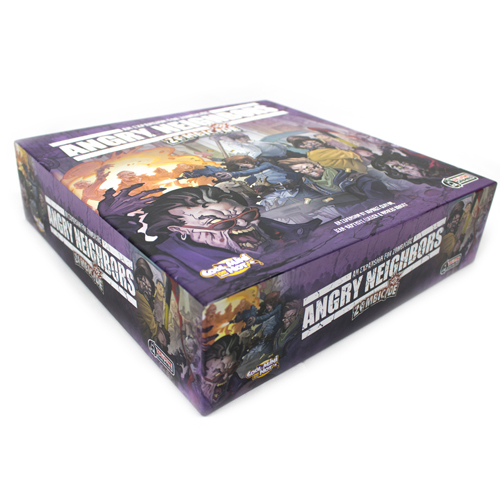 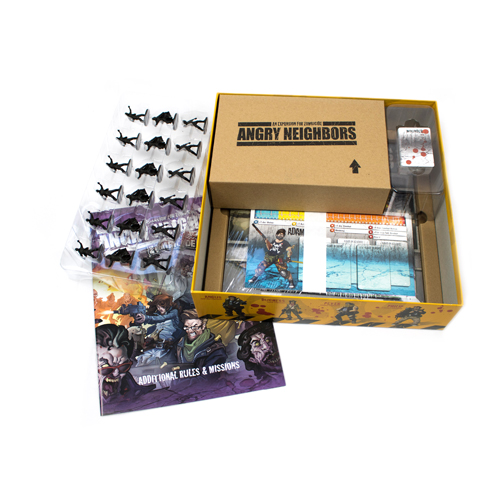 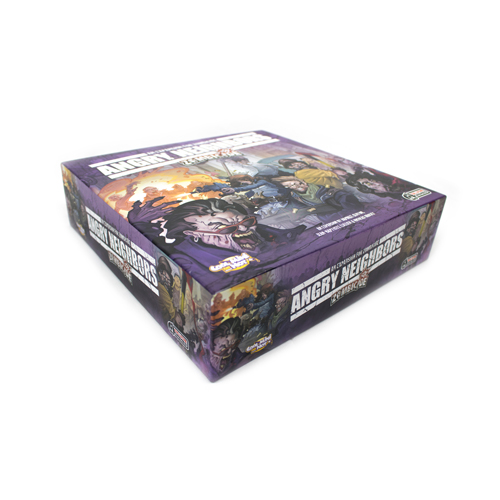 Pay in 3 interest-free payments on eligible purchases. Learn more
Success! We will let you know when this product is available again.
Your email address has been unsubscribed!
Your email address has been unsubscribed!
Notify me when this product is available to purchase!
This email address is already subscribed to this product!
Angry Neighbors challenges you to face off a whole new breed of Zombies. These seeker zombies have you and your friends in their sights and will chase you to your bitter end. Every Seeker zombie get an additional activation every time a seeker zombie spawn card is drawn. This box set brings 4 new survivors to the apocalypse each with their own special abilities. Angry Neighbors brin…
Read More
Categories Board Games, Miniatures Tags Guillotine Games, Zombicide SKU ZBG-GUG0055 Availability Out of stock
Share
Share this
80%

Angry Neighbors is an expansion for the Zombicide board game. Go for a hell of a tour in the neighborhood with four brand new survivors, their Zombivor counterparts, and eight companion sidekicks! Featuring 15 missions (5 for each core game) for hours of fun, this expansion uses three new game tiles filled with holes in the floors and intriguing new places to explore. Arm your team with new Equipment cards (Crossbow! Winchester! Zomb’ Knuckles!) to chase the fast and unpredictable zombie Seekers. Enjoy the (angry) neighborhood!

Angry Neighbors wants you enter the next era of the apocalypse! Set at the same time as Rue Morgue, buildings have crumbled and roads have collapsed. Now gaping holes litter the city's streets! With poor decision making you may find your survivors slowed down in these holes, and with a wrong move you may just end up in zombie filled pit from hell!

With these new zombies and environmental hazards, you're going to need something to keep you safe! Luckily for you, Angry Neighbors adds all new weapons to your core game as well as a collection of Ultrared equipment! These equipment cards offer the most powerful and potent zombie-obliterating weapons in the Zombicide universe to date! Perfect to up your survivors' survivability!

Fend Off the Angry Neighbors!

A Zombicide core game box is needed to enjoy this expansion.

Part of Season Three of the hugely popular Zombicide series – which also includes the Rue Morgue base game and other additional sets – the Zombicide: Angry Neighbors expansion adds a raft of new content to make your zombie-killing sprees even more fun than before.

Raphaël Guiton, Jean-Baptiste Lullien and Nicolas Raoult’s sprawling Zombicide universe puts players in control of zombie-apocalypse survivors who must work together to complete missions of varying difficulty in order to win the game.

Standing in your way are shambling zombies, insatiable in their desire to attack you (or, even worse, kill you) – unstoppable, that is, unless you can deal them enough damage to get them out of your way and kill them first.

With Angry Neighbors, there is more of the same content that fans of the original have grown to love, but there are plenty of new things going on here too that are sure to keep even the most stalwart zombie slayers entertained.

It’s worth noting that in order to play Zombicide: Angry Neighbors, you’ll also need at least one of the three base games to play (Zombicide, Prison Outbreak or Rue Morgue). The missions in this set combine components included here with those found in the base games.

There are 15 new missions included here, with the first five mixing Angry Neighbors content with the original Zombicide game; missions six to 10 using components from Prison Outbreak and missions 11–15 using contents from Rue Morgue. However, the rules say you can switch things out (at your own risk!) depending on which sets you own, and we did this a few times without any major issues.

Included here are three new tiles (that’s why you need one of the base games – three tiles does not make a map), which include some excellent new artwork and some new features that add to the gameplay.

First things first, there are really only four survivors to add to your roster here – despite Angry Neighbors offering you eight new minis. That’s because Adam, Jeff, Julien and Tiff come with their Zombivor counterpart, meaning they can return to exact a bloody revenge once they fall to the ravaging horde. Zombivors were first introduced in Toxic City Mall and offer a different gaming experience to players through Resurrection Mode.

Instead, Zombicide: Angry Neighbours adds new companions for survivors, which can be found and equipped like any other weapon. Once equipped with a companion, you can add their matching mini to the board (there are eight in total, two of each type) and essentially build yourself a team of survivors to fight the approaching horde with.

There are four types of companions – the Guman; the Handyman; the Searcher; and the Sniper – who each have their own abilities and skills. Some offer more tactical attack bonuses or grant you additional abilities, while others boost your defence from the rampaging zombies. Pairing them up with your character’s own unique set of skills can result in some pretty fierce squads – but be warned, players can only have up to two companions at any one time, so choose your buddies wisely.

Of course, while adding to your fire power, Angry Neighbors also up the ante for the Zombies too. The Seekers get an additional move action each time a Seeker Zombie card is drawn. This means, if there are already Seekers on the board when you’re spawning fresh zombies and you draw another Seeker card, those Seekers get a free move. Believe us, they move quick.

Angry Neighbors is a great addition to the Zombicide universe and goes to great lengths to introduce some truly innovative gameplay tweaks which add depth and dimension to your missions (either those published here or home-brewed).

In terms of new content, a few more additional game tiles (which in Angry Neighbors include features like Hole Zones – fun to drive the Zombie in to, hard to get out of if you fall in yourself – and Planks) wouldn’t have a gone amiss, especially to add some variety to the 15 new missions here. And a couple more survivors with new skills would probably have felt like more bite for your buck too.

Angry Neighbors’ greatest strength is the inclusion of the Seekers, which are a speedy breed of Zombie to go up against. In the end, Angry Neighbors is definitely worth the investment if you’ve played and enjoyed Zombicide before and are now looking to pimp up your zombie killing fun for your next games night.