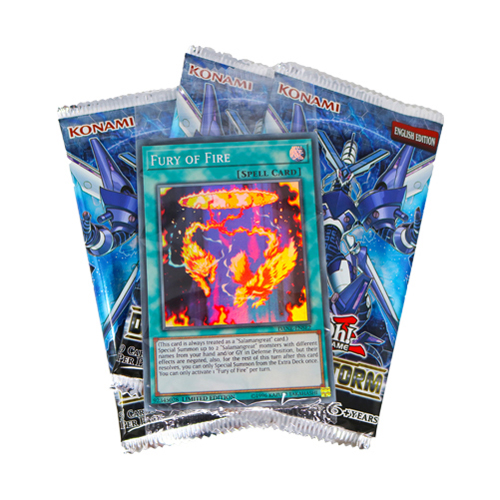 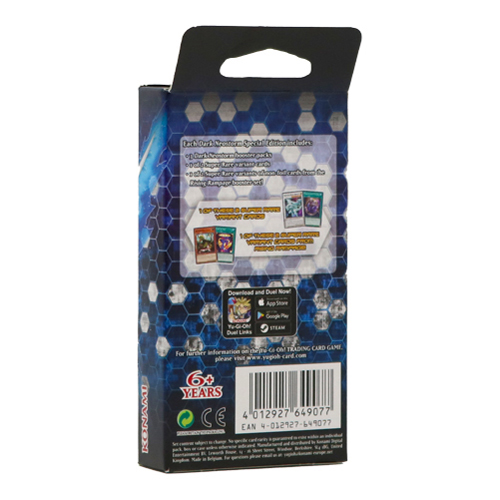 you could earn 649 victory points

you could earn 649 victory points

Beatraptor locks out the effects of anything in the Extra Monster Zone, while Fury of Fire accelerates Salamangreats from your hand or reignites them from your Graveyard to the field!

Yu-Gi-Oh! Dark Neostorm is one of the most hyped booster sets to have been released. The eighth set of the tenth series released over two years ago now, and it still sells wonderfully. It's clear that people are after this set. I was lucky enough to grab a Dark Neostorm Special Edition, containing three booster packs as well as two of four super rare cards.

So along with your three Yu-Gi-Oh! Dark Neostorm booster packs, you receive a see-through pack containing two cards. Both of these cards are super rare, and one of them is from the Rising Rampage expansion, which was the next expansion of the series. The four cards that make up the pool for these super rares are: Shooting Riser Dragon, Magicalized Fusion, Beatraptor, or Fury Of Fire.

I packed Fury Of Fire and Magicalized Fusion in my box, both of which are very interesting cards.

Fury Of Fire features stunning artwork, which looks even better in holo. It's a great spell for your Salamangreat deck, allowing you to special summon two monsters from your hand or graveyard in defence position. There are drawbacks to this, being that their effects are negated and you can only summon from the extra deck once the turn you played it. Overall, this is a pretty decent card if you're looking to bolster your Salamangreats.

My second card, Magicalized Fusion, is a simple fusion spell that allows you to fusion summon from the Extra Deck using material on your field or graveyard. Unfortunately, you can only activate one Magicalized Fusion per turn, but it's still a pretty solid card for a Spellcaster deck.

In my first Yu-Gi-Oh! Dark Neostorm booster pack, I drew a number of Dinowrestler cards. These were Tyrant Dino Fusion, Dinowrestler Eskrimamenchi, and Dinowrestler Coelasilat. Eskiramemenchi stands out to me especially. The other two are cards used to summon from the extra deck, whereas Eskiramemenchi is an effect monster. Its effect is that if your opponent special summons while this card is in the graveyard, you can special summon one level 4 or less "Dinowrestler" from the graveyard, as well as adding this card to your hand. There is one drawback, being that this ability can only be activated in your turn. This means your opponent has to special summon in your turn in order for the card effect to take place.

The super rare card I packed in this booster was Super Quantal Mech Beast Lusterrex. This XYZ Effect monster is a machine..literally! To summon Lusterrex, it costs two level 7 monsters. It can't attack unless it has material, and for good reason. It packs a whopping 2700 attack, and for the cost of an XYZ material, you can negate the effects of one face-up card. To add to this, if you have "Super Quantum White Layer" as a material, this becomes a quick effect.

In this Yu-Gi-Oh! Dark Neostorm pack, I pulled mostly spells and traps, such as Guardragon Reincarnation, Assault Mode Zero, and Sryuja's Shackles. These are all quite interesting, but my super rare card of booster 2 was Loge's Flame. It's a Valkyrie specific trap card. While it's in play and you control a "Valkyrie" monster, the opponent's cards with 2000 or less attack can't attack. Also, if this card is destroyed by an opponent's card effect, you can special summon one level 5 or higher "Valkyrie" monster from your hand or deck. Now I'd call that powerful!

Another great card I pulled was Amphibious Swarmship Amblowhale. This "Machine" link monster costs two effect monsters to summon, but it's worth it. Coming in at 2600 attack, Amblowhale also receives a bonus of 200 for each link monster in your graveyard. Secondly, once per turn you can activate one of two effects. If this card is destroyed, you can special summon a link 3 monster in either graveyard and special summon it. Or, if a link 3 monster on the field is destroyed while this card is in your graveyard, you can banish this card and destroy one card on the field. Just remember, if you do one, you can't do the other in the same turn.

In my last Yu-Gi-Oh! Dark Neostorm pack, I got some pretty cool cards. Firstly, Chaos Betrayer. This beast has 2000 on both attack and defence, and his effect is monsterous. While this card is in your graveyard, you can banish one "Light" and one "Dark" monster from your graveyard. Special summon Chaos Betrayer in defence position and banish a card in your opponent's graveyard. The only downside to this is that Chaos Betrayer leaves the field after using its effect, it's banished.

Lastly is World Gears Of Theurological Demiurgy. A mouthful I know, but it has awesome artwork. To summon this monster you must sacrifice three level 5 or higher monsters. Cracking down with 3500 attack, this card can't be used as link material, and can't be targeted by other monsters' effects. Its abilities can be used once per turn each. During your main phase, if you link summoned using three monsters of different types and attributes, you can destroy all other cards on the field. Unfortunately, this does include your own. Its second effect is if your opponent special summons from the extra deck, you can special summon one "World Legacy" monster from your deck.

Well, Yu-Gi-Oh! Dark Neostorm Special Edition is, by all accounts, pretty great. With three packs plus two extra cards, all for a low price, you can't go wrong with this box. And Dark Neostorm in itself is a great set with top tier cards to expand your decks. These boosters give support for: "/Assault Mode", "Altergeist", "Chaos", "Cloudian", "Destiny HERO", "Dinowrestler", "Salamangreat", and many more archetypes!