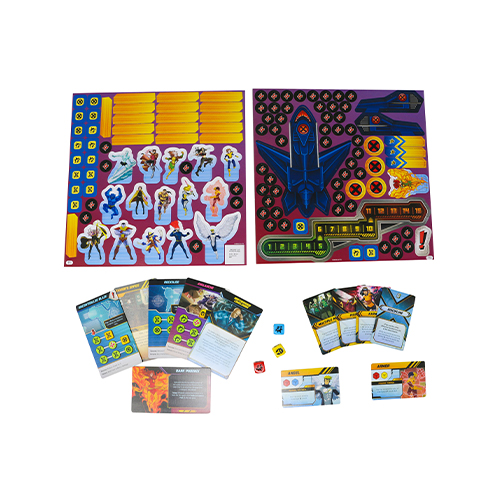 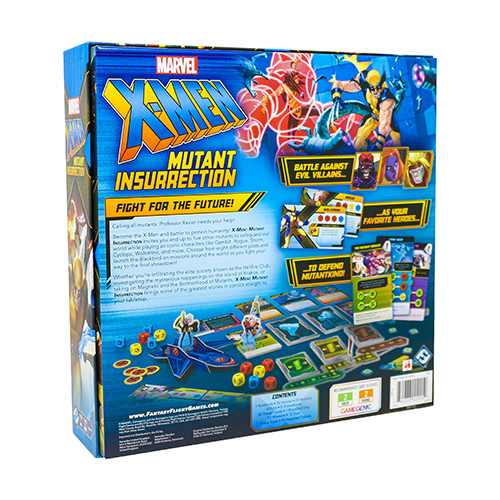 you could earn 4199 victory points

you could earn 4199 victory points

Though the world may despise them, the team of heroic mutants known as X-Men fight tirelessly to protect humanity from the sinister machinations of evildoers. Leap into the action with X-Men: Mutant Insurrection, a fast-paced, cooperative, dice-driven card game for one to six players! You’ll build a team of iconic heroes like Wolverine, Rogue, Storm, and Jubilee, embark on dangero…
Read More
Category Board Games Tags Co-operative, Dice Games, Fantasy Flight Games, X-Men SKU ZBG-FFGMI01 Availability 3+ in stock
Share
Share this
75%

Though the world may despise them, the team of heroic mutants known as X-Men fight tirelessly to protect humanity from the sinister machinations of evildoers. Leap into the action with X-Men: Mutant Insurrection, a fast-paced, cooperative, dice-driven card game for one to six players! You’ll build a team of iconic heroes like Wolverine, Rogue, Storm, and Jubilee, embark on dangerous missions around the world, and accelerate toward a thrilling showdown with a villain like Dark Phoenix, Magneto, or the Hellfire Club.

Designed by Richard Launius and Brandon Perdue, X-Men: Mutant Insurrection invites you to travel across the globe on death-defying missions to recruit new mutants, capture criminals, protect innocent lives, and battle some of the most memorable X-Men supervillains. Eight distinct scenarios await you and your X-Men, each with their own challenges and each leading to a no-holds-barred showdown against the villain. The Blackbird is ready to launch—join your team and fight for the future!

From Fantasy's Flight's acquisition of the Marvel IP comes a fresh foray into the world of superheroes. Hot on the heels of their runaway success Marvel Champions: The Card Game, X-Men: Mutant Insurrection has all the bells and whistles we've come to expect from Fantasy Flight. It delivers a sizeable stack of player characters, different scenarios, and multiple options for player count and difficulty. But with Fantasy Flight always ready to bring a new thematic win to the table, what does X-Men: Mutant Insurrection do that its predecessors don't?

This game is actually best compared to one of FFG's older games in the Arkham Files series. Elder Sign is a dice-rolling game in which players attempt to roll specific symbols on custom dice in order to stop an Ancient One from rising and devouring the city of Arkham (and the world!). X-Men: Mutant Insurrection is, in many ways, a re-skin of this.

Each player takes control of one or more X-Men. There are missions represented by tarot-sized cards, each with a series of objectives. Objectives are made up of symbols that must be rolled on different coloured dice. Each hero has access to a different combination of dice and is better equipped to collect specific symbols.

Players win the game by successfully completing missions. Gain rewards and keep the global threat to a minimum. They must also push through specific story missions, which will lead to a final showdown against one of many infamous X-nemeses. Players lose if the global threat becomes too high. Once in the showdown, they lose if all the heroes are defeated. One nice feature of this game is that, until the final showdown, any time a player loses their hero, they can simply grab a new one and keep playing. They might lose some boons and support cards they've collected, but they are still able to join in the action.

You Don't Have To Be Domino

Domino is the X-Man gifted with good luck, in case you didn't get the joke!

Any dice game runs the risk of being at the mercy of chance, but X-Men: Mutant Insurrection has a lot of features to mitigate this issue. Different dice are weighted towards certain symbols. All heroes are allowed two re-rolls when attempting a mission. There are hero powers and mutant support cards which can manipulate the dice by offering additional re-rolls, conversion to or from certain symbols, or training tokens that act like a stored dice roll to be cashed in when needed.

There are some negative effects, too, of course. Some villains will punish the rerolling of certain symbols. Each round, a random event will set back the heroes based on the current threat level. Perhaps a Sentinel will appear, making a mission more dangerous. Or maybe Mystique is messing with the X-Men by providing a cunning distraction. These setbacks never feel unfair or insurmountable, but they do keep the challenge up and prevent stalling in the run-up to the showdown.

If you've read the X-Men comics, you'll know that a lot of the time it's more like reading a telenovela than a superhero adventure. The X-Men are constantly teaming up and falling out, finding love and betraying friends. This is reflected in the game, too.

Each hero has their own power and dice pool, but they also have an assist card. When you go into a mission with another hero, you can exchange these cards in order to gain access to new dice and new powers. This encourages teamwork and careful planning when selecting who goes to which mission.

In addition, if heroes do well together in a mission, they can form a bond. This gives them a permanent ability that they can use whenever they are together. It allows for some great story moments. What a twist when Cyclops and Wolverine's mission to stop a jewel heist leads to true love! And, of course, these bonds can break too. If a later mission goes poorly, trust can turn to betrayal, love can turn to regret, and those bonuses turn into penalties that must be factored into future adventures.

It's the little things that bring a game to life. A miniature X-Jet that serves no purpose, beyond providing a place to put your characters between missions, is exactly the kind of fluff you'd want from a game like this. The quality of materials is strong, and the interchangeable cardboard hero standees are all superbly illustrated.

In fact, all the art in this game is great. All the cards and standees have new, original artwork. This gives the game a contemporary feel while still invoking the nostalgia of the old cartoons. The bold colour scheme makes the game very easy to understand. The threat tracker has three traffic-light stages that determine the degree of bad stuff about to happen. Different mission types are helpfully colour coded. When bonds break, they flip from a reassuring blue to a dangerous red. (Note: These colour codes are all backed up by symbols and other signifiers to accommodate any colour-blind players.)

The Showdowns are also appropriately dramatic. When you enter the final stage of the game, all other components are set aside and you flip all the story missions you've completed. These missions fit together to make a tableau of the finale with exciting art and missions to complete. I won't spoil anything here, but some of the later showdowns employ some very clever mechanics to keep the heroes guessing!

My biggest gripe about this game is the box size. There's a lot of content, but since most of it is cards, it could easily be packed into a smaller container. Perhaps we're being given the space to hold additional expansion content (this is FFG, after all). And this is arguably what the game needs as a whole.

As a base game, X-Men: Mutant Insurrection is light and fun. But after a few games, it becomes apparent that there are areas that need fleshing out. There are five decks that throw out missions. And while these decks are cleverly constructed, there are only five cards in each. Meaning that they quickly become very familiar.

There are a lot of heroes and a host of other mutants who can be recruited as supporting characters. Most of the powers are very similar, and mainly offer rerolls for certain dice colours and symbols. There are exceptions, of course. Shadowcat's threat-specific phasing ability is notably unique. And Angel's ability to move success markers from one objective to another is one of the best in the game. The X-Men are known for their unique abilities, and a bit more variety in this area would really help the replayability.

This is a hard one to review objectively. As a huge fan of the X-Men, particularly the comics, X-Men: Mutant Insurrection ticks a lot of boxes for me. Any game where I get to fly around the world in the X-Jet as Iceman and Storm is going to be a mainstay on my gaming shelf. And there is a lot to like about this game. The component quality is great. The art is simultaneously nostalgic and fresh, the setup is simple. And the gameplay has just enough luck mitigation to stop it from getting frustrating.

But, if the theme isn't your thing, then there's probably not quite enough here for you. The complexity can fall into that weird no man's land between warm-up game and main event. Strategy/replayability is hampered by a lack of variety in abilities and locations. Perhaps this can be fixed with an expansion, but until then this is a game of theme. You have to buy into that theme to get the most out of it.

My final verdict: if you love the X-Men, you're probably going to find a lot of fun here. If you don't like the X-Men, go read some comics to see what you're missing!