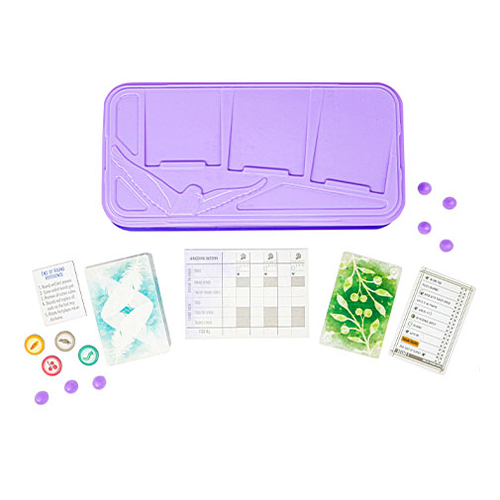 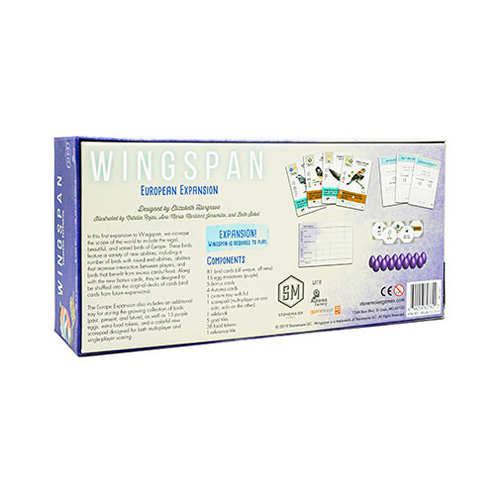 In this first expansion to Wingspan, we increase the scope of the world to include the regal, beautiful, and varied birds of Europe. These birds feature a variety of new abilities, including a number of birds with round end abilities, abilities that increase interaction between players, and birds that benefit from excess cards/food. Along with the new bonus cards, theyre designed …
Read More
Category Board Games Tags Best Sellers, Podcast Approved, Stonemaier Games, Wingspan, Zatu Gold Award SKU ZBG-STM901 Availability 3+ in stock
Share
Share this
84%

In this first expansion to Wingspan, we increase the scope of the world to include the regal, beautiful, and varied birds of Europe. These birds feature a variety of new abilities, including a number of birds with round end abilities, abilities that increase interaction between players, and birds that benefit from excess cards/food. Along with the new bonus cards, theyre designed to be shuffled into the original decks of cards (and cards from future expansions).

The European Expansion also includes an additional tray for storing the growing collection of birds (past, present, and future), as well as 15 purple eggs, extra food tokens, and a colorful new scorepad designed for both multi-player and single-player scoring.

Wingspan was one of the hottest games of 2019. It outsold everyone’s expectations including the publisher, Stonemaier Games themselves. Then it went on to win the prestigious Kennerspiel Des Jahres award. So when the European Expansion for Wingspan was announced its fair to say excitement levels were sky high! So is it Stonemaiers golden goose or an ugly duckling?

Birds of a feather

As you’d expect the production quality is on a par with the base game. That is to say, it’s exceptional. From the new purple eggs to the beautiful and unique artwork, the wingspansion integrates seamlessly with the original game. So seamlessly in fact that seasoned Wingspaners can simply shuffle the new cards in and start playing immediately. You might have to refer to the rules to check the odd piece of symbology, but just like the base game it’s highly intuitive in both graphic design and gameplay.

The European Expansion comes with more eggs, more food tokens, more storage and 81 new unique bird cards. There are however, mechanically speaking, no new types of resources or components. Everything the expansion adds to the gameplay it does through the new bird cards, with a few new personal objective cards and round end objective tiles too of course.

There are many new bird powers and actions such as:

Great for burning through that deck a little quicker. Or there’s:

There’s also a new type of card with a teal coloured banner who’s powers are triggered at the end of a round rather than when the bird is played or when the action of their habitat is taken.

So at the end of a round you may able to:

A useful means to turn an over invested food engine into points! With 81 new birds it’ll take many games to discover all the new actions. Finding the myriad synergies between them and the original 170 birds? Well that might just take forever.

Wingspan is a fantastic game. It’s insanely popular for good reason. However under the pressure of intense scrutiny from the hobby game community, even this ornithological masterpiece  has suffered cries of “overpowered crows” and “dominant egg laying strategies”! Now what is really special about Stonemaier Games is that on top of supporting their games with new content via expansions, they are also committed to using these expansions to balance the gameplay of base games.

By rewarding players for things like not having eggs on cards or for having lots of cards in hand etc, the Wingspansion does an excellent job of balancing those emergent dominant strategies with new ones of its own. It provides many more card synergies and ways to score points and ultimately that’s a very good thing for the longevity of the game in people’s collections.

Undoubtedly the European Expansion is a fairly low key affair compared to some game expansions. No wildly new mechanisms or game changing alterations here. What it does is freshen up the deck and give players feasible alternatives. This means that if you have played Wingspan a lot or you’ve noticed your games stagnating with the same old strategies, then this addition will be most welcome indeed. It’ll breathe new life into this wonderful game! If however, you’re new to wingspan or you’ve only played a few times, then you might not fully appreciate what the expansion has to offer yet.

I mean with the new cards the bird deck is 251 cards thick. If every card you gain is new to you then that’s an intimidating amount of bird powers to read. That’s not to say you can’t throw it in when teaching new players. The European birds don’t increase game length or complexity really. They just give more options, more synergies and more scope for differing strategies.

Strictly speaking, the European Expansion for Wingspan is not an essential expansion. The base game is great on its own. In fact if you’re new to Wingspan I would recommend getting fully familiar with it first. Get to grips with the strategies available in the original deck, until you are consistently scoring in a high tier. Then when you add the European cards in, and I highly recommend you do, you’ll fully appreciate the new content. Because this really is an excellent addition to a fantastic game. The counterpoint and alternative strategies are revitalising. The production quality is a joy and the artwork is so gorgeous. Any Wingspan fan will want this one on the shelf.