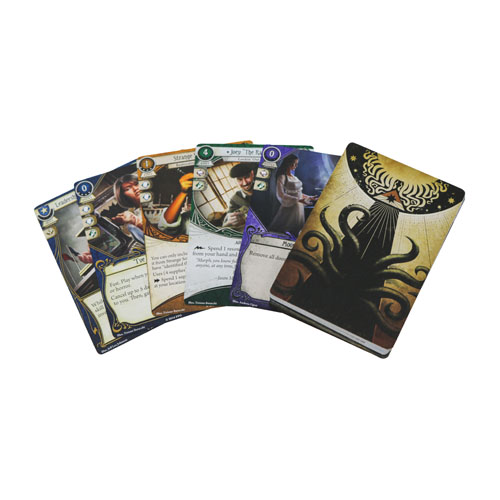 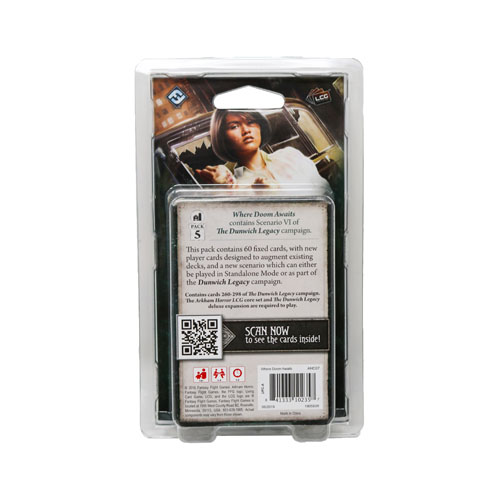 Arkham Horror: The Card Game is a cooperative game for up to two players (or four, with two core sets). Set within the fictional world of H P Lovecraft’s Cthulhu Mythos, players will each take on the role of an investigator. Each investigator is unique, with their own set of skills, strengths and weaknesses, represented a deck of cards. The game is played by completing a numbe…
Read More
Category Board Games Tags Arkham Horror, Arkham Horror LCG, Best Sellers, Fantasy Flight Games, Living Card Game SKU ZBG-FFGAHC07 Availability 5+ in stock
Share
Share this
87%

After the slight distraction of saving the Dunwich countryside from the nightmare brood of an Elder One, the cycle returns to its central focus in Where Doom Awaits. Tracking Silas Bishop down by following the strange lights erupting from the top of Sentinel Hill, our plucky investigators must find a path up the mount to stop his ritual.

Tread carefully, though. The magic Bishop has unleashed has released strange mists. The land underfoot seems to shift and slide, making it difficult to find a way forward. Will the investigators make it up the mountain in time or will the ritual be complete damning humanity to desolation?

Where Doom Awaits plays like a combination of The Miskatonic Museum and The Essex County Express episodes. Like the former, you will venture out from a central column trying to find the path up to the next level. Like in the latter you are in a race against time to ascend the hill. Throw into this mix a shifting landscape and some pretty punishing forced location events, and you have one of the toughest missions yet. Unlike other episodes, failure in this mission spells failure for the campaign. You may only progress to the final chapter by reaching the peak of the hill in time.

There are some supercharged cards in the pack to help overcome this challenge though. Strange Solution in the Seeker deck finally gets his payoff with a superpowered weapon in Acidic Ichor or the equally powerful healing potion Restorative Solution or Freezing solution which makes it easier to cut and run from enemies. the latter can be highly helpful on the slopes of Sentinel Hill.

Elsewhere all the other classes get some nifty cards in Where Doom Awaits. These and the neutral card Fine Clothes (which would have been far more helpful earlier in the cycle or even in the Night of the Zealot campaign), may allow you to come back harder, better, faster, stronger should you fail on your first attempt. Spoiler alert: you will probably fail on your first attempt.

To be honest, I was initially dismayed by the win-or-die end conditions of this mission. Partly because the first time, we managed to drag our sorry wrecks to the bottom of Sentinel Hill we were deeply mentally and physically scarred by the previous missions. We didn’t really stand a chance and we wanted to see the ‘true’ end to the story.

Having played Arkham Horror more though, I’ve come to realise that any resolution is the ‘true’ end to the story, so this is less of a concern. Also, we came back with better knowledge, built better decks (utilising some of the cards we’d found in the deck) and arrived at the base of Sentinel Hill in much better shape. Then we lost again.

As the saying goes though, if at first you don’t succeed, reply Night of the Zealot first and come back to the campaign another time. Which I did, playing two-handed solo and finally beat the Hill. I felt like rocky reaching the top of the Philadelphia Museum of Modern Art steps: an utter champion. Tough as it is, Where Doom Awaits rewards players with a maximum high for their perseverance.