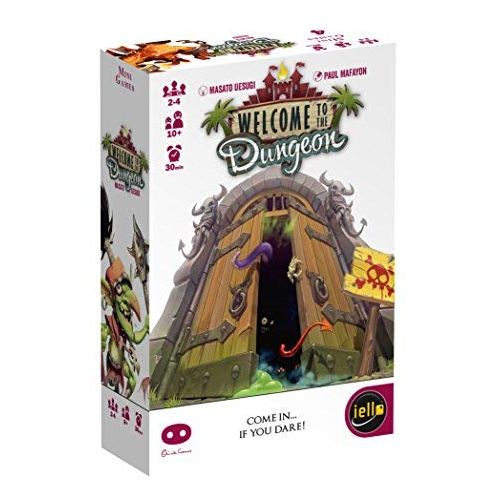 Welcome to the Dungeon

Iello’s light dungeon crawling party game, Welcome to the Dungeon, has great art and quality components, and a simple set of rules, but under the surface it can offer some interesting decision making.

Welcome to the game overview...

In Welcome to the Dungeon, players are competing to be the first to negotiate a dungeon on two successful occasions, or to be the last player standing if all other players have two unsuccessful dungeon delves. Seems simple enough, but the twists are that:

So this is a game about doing what you can with a limited amount of information, resulting in a lot of second guessing, clever bluffing, and a fair bit of luck.

Welcome to the Dungeon plays with two to four players, and is different across the player count - the more players that are involved, the less information each player has access to, and the longer games can be, but on the flipside it means less chance of being forced into the dungeon. The box says it is simple enough for 10-year-olds to pick up, which is about right - the game could be played by younger children, but it is unlikely they would appreciate all of the subtleties of what they could do.

Welcome to the adventurers...

There are four adventurers in Welcome to the Dungeon, and as you would expect these are fairly traditional dungeon-crawling tropes - The Warrior, Barbarian, Mage and Rogue. Each has their own set of equipment tiles, which give them different skills, and make them useful against different monsters in the dungeon.

These tiles could have been produced as cards, but instead are superb quality thick card punchouts, with spot UV coating highlighting the great artwork, a nice touch.

Welcome to the monsters...

There are only eight types of monster in Welcome to the Dungeon, with multiple copies of most, but despite this, it never feels that there isn’t enough variety, and the artwork is amazing!

Monsters range in strength from the weak Goblins (one strength) up to the powerful Dragon (nine strength), and each has its own Achilles heel - for instance Goblins (strength one), Skeletons (two) and Orcs (three) can all be defeated with the Torch equipment tile, whilst the Holy Grail tile defeats all monsters with even-numbered strength.

Handy player reference cards show all of this information - the strength of each monster and how many there are in the game, plus icons to show how they are defeated (some can be defeated by more than one piece of equipment).

Welcome to the set-up...

One of the four characters is chosen at random, and their equipment tiles are laid out beneath them - each adventurer has six themed equipment tiles that will help them through the dungeon. The 13 monster cards are shuffled and placed face down, along with the success cards, that players take if they win a round.

Each player takes a reference card and places it white side up (the reverse red side is used to show if a player has had an unsuccessful trip to the dungeon), choose a start player and you are ready to go!

Welcome to… you get the idea

On their turn a player can do one of two things:

It takes a few games to understand what impact putting monsters in, or keeping monsters out of the dungeon will have, for example, say the Warrior is the adventurer this round, and you draw the Dragon monster card - do you...

The simple decision of putting the monster in or out of the dungeon is a bit more complicated than it might at first seem.

So, all the other players have passed and you are left to take the adventurer through the dungeon, is that what you wanted, had you taken out all the powerful monsters, or had you planned to pass but left it too late?!

Next, have a good look at your remaining equipment tiles - Vorpal weapons (sword, dagger and axe) require you to name a type of monster before before entering the dungeon, and the weapon is then powered up to destroy those monsters only.

Then begin to reveal the monster cards from the dungeon pile one by one - the rules don’t say what order to do this in, but we always reveal the cards from the bottom of the pile so they are encountered in the order they were put in, and players might have some idea what they might encounter and when. Make sure to flip the cards for maximum dramatic effect!

This is where the remaining equipment tiles come in - if you have an item that can eliminate the monster, that’s great, the monster is discarded, but if not, you lose health points equal to the monster’s strength. Some items are a bit more complex - for instance the Healing Potion allows an adventurer to come back to life with their base health points once per dungeon. The strangest is the Mage’s Omnipotence spell which allows the Mage to win the round even if they died, as long as all the monsters in the dungeon are different - we’ve never seen that one pay off as yet.

Quite simply, if you lose all your health points, you are unsuccessful - flip your reference card to the red side, or if it is already on the red side, you are out of the game. But if you have health points remaining, you survived the dungeon! Grab a success card, and if this is your second success you win the game!

If no-one has won, a new round starts, with the next adventurer chosen by the player who just dungeon delved, and a re-shuffled deck of monster cards.

Hold on, you said if you lose two dungeons you are out of the game, isn’t that...

Yes, that’s player elimination (gasp). Generally, this is okay as the game isn’t normally long enough for it to be a problem (with two players of course one player automatically wins if the other is eliminated). However, a four-player game can range from just two rounds (two successful trips to the dungeon for one player), up to (an admittedly unlikely) 11 rounds, so it is possible to have to sit out for a full eight rounds, but we’ve yet to see that happen.

Summing up Welcome to the Dungeon

Welcome to the Dungeon is a fast and fun filler game, with a neat and simple mechanic that is easy to explain, but loaded with potential for complex decision making. It it is a game that needs to be played in order to appreciate it fully, so maybe play a warm-up round with any new players to help them ‘get it’, before diving in. The four different adventurers give it a fair amount of replay-ability, and the sturdy equipment tiles are fun to handle and great to look at.