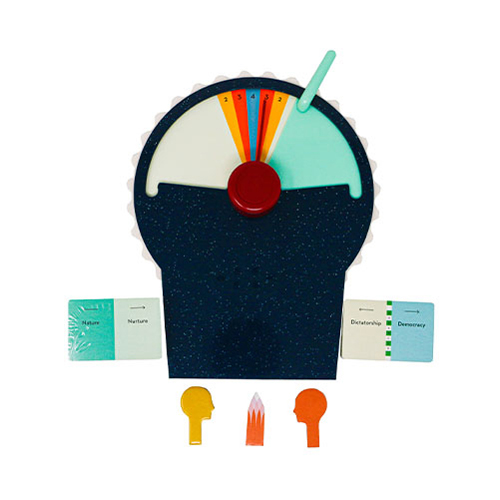 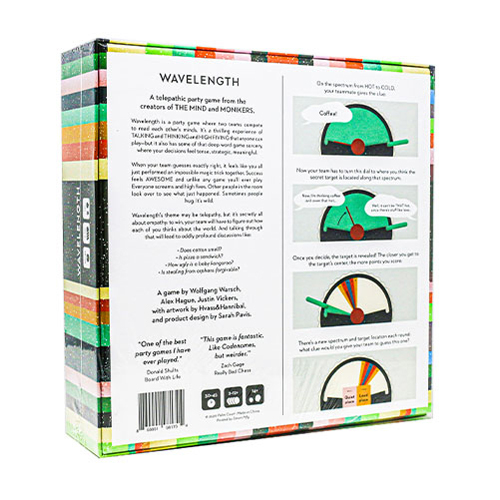 Wavelength is a social guessing game in which two teams compete to read each other’s minds. Teams take turns rotating a dial to where they think a hidden bullseye is located on a spectrum. One of the players on your team — the Psychic — knows exactly where the bullseye is, and draws a card with a pair of binaries on it (such as: Job – Career, Rough – Smooth, Fa…
Read More
Category Board Games Tags Best Sellers, BGG Golden Geek, Dice Tower, Family, Fun For All the Family, Girls Night In, Golden Pear, Palm Court, Party, Podcast Approved, Value For Money, Zatu Gold Award SKU ZBG-WAV01 Availability 3+ in stock
Share
Share this
87%

Wavelength is a social guessing game in which two teams compete to read each other's minds. Teams take turns rotating a dial to where they think a hidden bullseye is located on a spectrum. One of the players on your team — the Psychic — knows exactly where the bullseye is, and draws a card with a pair of binaries on it (such as: Job - Career, Rough - Smooth, Fantasy - Sci-Fi, Sad Song - Happy Song, etc). The Psychic must then provide a clue that is *conceptually* where the bullseye is located between those two binaries.

For example, if the card this round is HOT-COLD and the bullseye is slightly to the "cold" side of the centre, the Psychic needs to give a clue somewhere in that region. Perhaps "salad"?

After the Psychic gives their clue, their team discusses where they think the bullseye is located and turns the dial to that location on that spectrum. The closer to the center of the bullseye the team guess, the more points they score!

The idea is deceptively simple, and it might also be a lot of fun - are you on the same wavelength as the rest of your team?

Wavelength is a straightforward game to play. Players are assigned to two teams. One player on one of the teams is presented with a card, on which two dichotomous extremes are written, e.g. dark - light. The “active” player is shown a randomised position on a sliding dial - let’s imagine that the position is near, but not at the very end of, the “dark” end of the scale. They have to come up with a word which matches that position on the scale - they may choose “twilight”, or “Deadpool”. The rest of the team then have to guess where on the scale they think that word belongs.

The opposing team then tries to decide if the actual position on the scale is higher or lower than that proposed by the active team. Points are awarded for accuracy (two to four) and the opposing team are awarded a point if their higher/lower decision was correct. The first team to ten points wins.

It’s as simple as that. The novelty of the game, however, comes from the diversity in the word cards. Some are straightforward, fairly obvious, unambiguous (such as dark/light). However, some are possibly more subjective, such as sport/game or smells good/smells bad.

Then there are the “advanced” cards, which deal with more tricky concepts - famous/infamous (what would you say for the midpoint of that scale?) or guilty pleasure/actually just bad.

As you can imagine, the joy of playing Wavelength comes not just from the game itself, but from the discussion which surrounds the guesses. So although the game would work with 4 people perfectly well, it wouldn’t be much fun… six players seems to be minimal ideal numbers.

One of the most startling things about Wavelength is the quality of the components. Rather than designing the game with a cardboard dial, it is made from a nice solid plastic. Everything has a really rigid feel to it - even the box insert, which doubles up as the game “board”. It all feels very well considered and designed. This game has been built to last - which it needs to, as it is going to get a lot of manhandling during play. But not only is it functional - it also looks good, to… glitter infused plastic… remember what I said about gameshows? The box is very distinctive; maybe it’s my age talking, but it is very reminiscent of a 1970s Hawkwind album cover… some of you will know what I mean. Very psychedelic.

Wavelength is a good fun, party game, with a team competition vibe. It is a simple design, but the game is well made, with quality components, and sufficient variety in the cards that you won’t get bored quickly. It plays in under half an hour but you are guaranteed to want to play a couple of times.

Player count is a big consideration, though - the fun comes from the discussions that take place, non in the execution of the game itself. So this is one to save until you have at least six at the table.