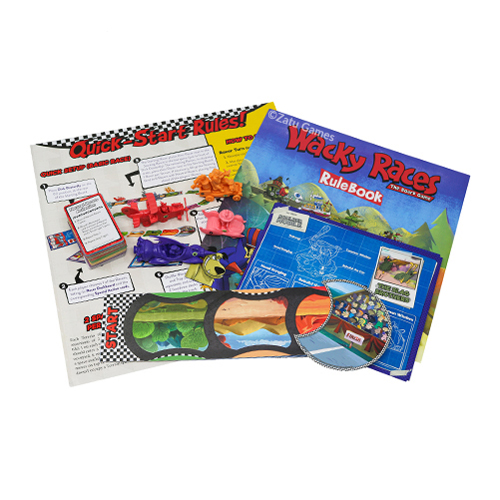 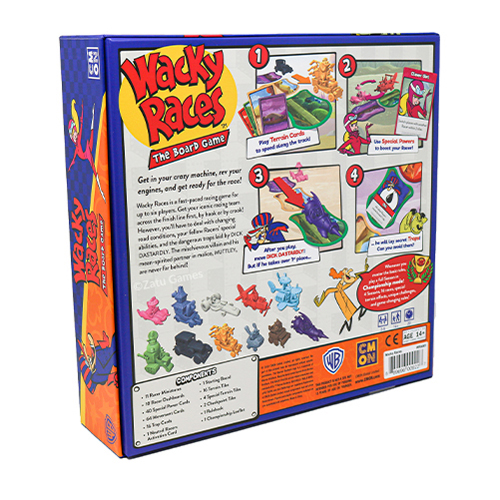 you could earn 4149 victory points

you could earn 4149 victory points

Wacky Races: The Board Game puts players in the “driver’s seat” with control of their favorite drivers from the cartoon series, including The Slag Brothers, The Gruesome Twosome, Penelope Pitstop, Peter Perfect, and more, each with their own car equipped with special abilities. They compete against each other as well as the game-controlled, mustachioed Dick Dastard…
Read More
Category Board Games Tags Andrea Chiarvesio, CoolMiniOrNot, Racing Games SKU ZBG-CMNWRA001 Availability 1 in stock
Share
Share this
78%

Wacky Races: The Board Game puts players in the "driver's seat" with control of their favorite drivers from the cartoon series, including The Slag Brothers, The Gruesome Twosome, Penelope Pitstop, Peter Perfect, and more, each with their own car equipped with special abilities. They compete against each other as well as the game-controlled, mustachioed Dick Dastardly and his wheezy pup Muttley.

Races are simple, yet strategic, as players place cards indicating the terrain tiles to which their racer will move, with the last card played indicating where Dastardly and Muttley will end up. However, it wouldn't be wacky without a little trouble standing in the way. Racers need to dodge or negate traps set by Dastardly as he attempts to stay ahead of the pack. Racers can choose between single races lasting 10-15 minutes or the Championship mode, which offers unique rulesets changing from race-to-race before a winner is named.

Wacky Races: The Board Game will be released in both a regular and a deluxe edition, with the deluxe edition including pre-painted miniatures, while the regular edition will have one-color miniatures.

Many people will fondly remember the Hanna Barbera cartoon, Wacky Races, from their childhood. The cartoon itself only consisted of a single season, broadcast in 1968. However, it has been repeated time and, as a result, children of many different generations have grown up knowing it well.

Wacky Races, the board game, is a two-to-six player game of card-driven racing mayhem. I would have choked on my Corn Flakes and scrambled for it if came out when I was young. Even though that was a long time ago Wacky Races is so ingrained in my heart that when I heard of it’s development in late-2018 it made it to the top of my list of most anticipated games of 2019.

Once a player selects their racer (all 10 are here), they take the miniature and character dashboard, plus the four character-specific special ability cards and place them in the corresponding slots on their dashboard.

Players assemble their racers on the starting grid. The first player is located in last position, and so on. If you are playing with less than six players, the remaining slots are taken by neutral racers controlled by the game. Dick Dastardly, who is also controlled by the game, begins at the very rear of the board in last place.

The track is constructed out of the terrain tiles that are placed in a random order. The gas station tile is placed at the halfway point and one of four special terrain tiles is added to the second half of the track.

Players are dealt a starting hand of three terrain cards and on their turn they can move up to three spaces if they are able to play a card that matches the terrain tile that they currently reside upon. The first card they discard doesn’t need to match any terrain. This essentially allows a racer to always move at least one space ahead each turn, no matter how unlucky they get with the card draw. At the end of your turn you draw back up to a hand size of three.

The last card used by a player on their turn indicates the movement of Dick Dastardly. He then moves to the next terrain tile of that type in front of him. If he moves to the front of the race, he lays a trap in that space then returns to last place. When a player lands on a space with a trap they must resolve it immediately (unless their special ability allows them to ignore it).

The first player to cross the finish line wins. Just like in the show, Dick Dastardly can never win!

The individual special abilities of each racer sets them apart from each other. They can be used at any point on a player’s turn to give them an advantage or boost. This can vary from simply moving a number of spaces ahead, to switching positions with a nearby racer, to swapping terrain tiles around and stealing cards from other players. Some attempt has been made to make the abilities fit the character of the racers, although sometimes this fits really well and other times it’s a bit of a stretch thematically.

I've played as every racer in Wacky Races and despite two abilities being the same for every racer (avoid x-trap/y-trap and discard up to three cards and draw the same amount) it’s fun to play as different racers and try out their different abilities. I wouldn’t say there is an outright best racer so people can find the racer that best fits their playing style. I favour the sheer crazy randomness of Professor Pat Pending, while my eldest daughter likes the intimidation and meddling of the Ant Hill Mob.

Wacky Races is published by CMON. Therefore, it’s a given that the plastic racer miniatures will be highly detailed. When I first opened the game I spent ages with my children poring over each individual miniature and marvelling at their beauty.

The rest of the components don’t really live up to the ultra high standard of the miniatures. The cards are okay, but they're are very small. This doesn’t bother me (I think they’re the same size as the cards in the original Ticket To Ride), but the starting grid and terrain tiles are of similar thickness to the cards, where I really feel they should have been produced in a nice robust card stock.

I am really appreciative that CMON included all 10 racers (and Dastardly’s car) in the box, especially as only six are needed each game. Some more cynical companies may have held back some of the characters and released them separately as a cash grab… err, I mean expansion.

Simplicity is what makes Wacky Races great. This is a real family-weight romp that I'd recommend for anyone from the age of five upwards. Decisions can sometimes tend to be quite obvious, but this can lead to games playing quickly with minimal downtime. Using your special abilities at the right time can be the key to victory.

Wacky Races does contain moments of genuine tension and excitement. When you know you could win the race on your next turn and you frantically hold on, watching the other racers take their turns, hoping they come up short. Or when you're revealing the movement of the neutral racers (who are controlled by the game). This has happened to me a couple of times now.

With my younger daughter, we were revealing the movement cards of the neutral racers knowing that if the purple prairie card showed up then a neutral racer would win... First card, yellow (good)... Second card, green (okay)... Third card... PURPLE!! (Cue a double scream of disbelief!!) What fun!