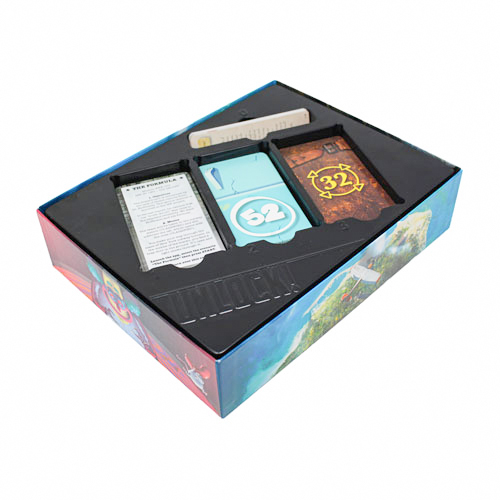 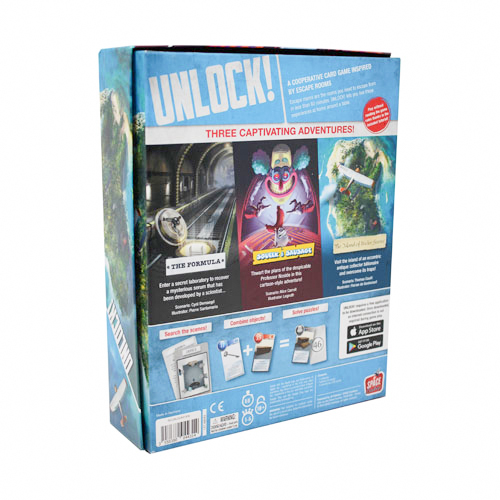 If you’re a fan of escape rooms, then the Unlock series of puzzle games are going to shoot straight to the top of your wishlist! Similar to their physical counterparts, Unlock pits you against the clock, where you and up to six players, in a co-operative manner, have to figure out a number of crafty riddles that will drive you through a narrative. Unlock comes with three different…
Read More
Category Board Games Tags 9+, Asmodee, Best Sellers, Card Games, Escape Room Games, Golden Pear, Unlock!, Value For Money SKU ZBG-ASMSCUNLOCK01EN Availability 3+ in stock
Share
Share this
85%

If you’re a fan of escape rooms, then the Unlock series of puzzle games are going to shoot straight to the top of your wishlist! Similar to their physical counterparts, Unlock pits you against the clock, where you and up to six players, in a co-operative manner, have to figure out a number of crafty riddles that will drive you through a narrative.

Unlock comes with three different adventures in it. Before you play any of them, you’ll also need to download the free smartphone app (available on both Google Play and the App Store for iOS). You’ll use the app to pump in answers you believe to have deduced throughout the venture – and it also acts as the 60-minute timer with which you have to complete the quest.

The game works with a clever deck mechanic, in which each card is numbered. You and your team are given a set number of specific cards to start with. You’ll have to work out patterns and codes (we’re trying not to give any spoilers, here!) from the limited information you have on your starter cards, by pumping your answers into the app. Get it right? Hooray! You’ll find out the next clue cards you’ve ‘unlocked’ from the deck, which will aid your progress.

Get it wrong? You can ask the app for clues (kind of like how a regular escape room drip- feeds bamboozled players information), but beware… Each clue will remove precious minutes from your remaining time – so you’d better make sure taking a clue is worth the sacrifice!

Unlike the Kosmos series of Exit games that are destructive (in those deck-based escape games you may have to cut up or draw on cards), Unlock doesn’t have you ruining the components. They are, of course, one-time adventures, but since you get three different scenarios in each Unlock pack, each game offers up a fantastic experience.

The cartoon artwork is light-hearted in places and of a caricature nature. The plots are delightful – in places this is a much more tongue-in-cheek escapade in comparison to the more serious, creepy Exit games that see you in doom-laden scenarios. In one of the Unlock adventures, for example, titled ‘Squeek and Sausage’, you’re attempting to thwart the mad, clown-like Professor Noside who is hell-bent on world domination, all while being trapped in his kooky lab. However, whatever Unlock plot you play, the story is there for all to absorb – as cards are unlocked, you’ll feel like you’re making actual progress.

The Unlock games by Space Cowboys are one of the closest things you’ll get to a ‘point-and- click’ adventure game for a PC or console. Only here, you get to play it with a whole table of co-adventurers, all working, cheering and laughing together. If you’re looking to get some of your ‘non-board gaming friends’ into the hobby, perhaps Unlock is the key game for you.

Standing blinking in the daylight, thrilled, breathing gradually returning to normal, the last hour - a dizzy rush of triumph and frustration, immediately wanting to talk through a detailed post-mortem then to do it all again. That is my recollection of completing an escape room. A ‘real’ escape room.

Today, though, in front of me is Unlock! Mystery Adventures, an escape room in a box. Will it compare to the real thing?

Unlock! is a game system by the stylish French games company, Space Cowboys. They’ve brought us Splendor, T.I.M.E. Stories and plenty of others. I say ‘game system’ because the there are loads of boxes of Unlock! games: Unlock! Mystery adventures, Unlock! Secret Adventures, Unlock! Exotic Adventures (which isn’t as racy as it sounds – calm down at the back there!). Each one uses the same basic system but with a very different set of adventures within.

I’m looking right now at the Mystery Adventures box, which is lovely. Three scenes, beautifully rendered, give us a flavour of what’s inside but reveal no spoilers. A giant squid-like Kraken wrestles a submarine. A classic spooky house on a dark night. A desert island with parrot, treasure, and human skull. Mmmm! Atmospheric. The box contains three adventures with wildly different themes and with a choice of three difficulty levels. They are for one or more players – which means that, yes, you can it play it solo.

Inside we find almost no components – an elegant simplicity which I admire. Just three sealed packs of cards – one for each adventure, a smaller set of cards for the tutorial game and a short rule book which you are encouraged to ignore in favour of the free app.

That’s right! You need an app to play this system. Some people have balked at this, finding it at odds with the ‘unplugged’, tactile and social ethic of tabletop games. I found it really useful. We downloaded the app to our fruit-based mobile device, but it’s also available for androids. From the front page you select which adventure you are attempting and the interface appears, re-skinned to match the theme of the game. For most of the game it is simply a timer (you have an hour unless you make a mistake and earn a penalty), but when you’ve found a code, you enter it into the app and it tells you how to proceed. The app can also give hints and pointers too.

The other half of the game is the set of cards. A single starting card gives you some background, then ‘flip this card over’ and you’re away! Each card is numbered or lettered and has excellent atmospheric art and flavour text. Clues lead you from one numbered card to another, sometimes via the code input on the app. Some of the cards have a blue or red jigsaw icon which means they have to be joined to another card – add the numbers together to find the next clue. The puzzles are varied (I’m trying hard to avoid spoiler detail!), some need you to look closely, others to make the cards interact with each other – but they’re all cleverly done and some are infuriatingly fiendish.

There is a short tutorial game which shows you all the basics so that you can be up and running for the proper game without having to interrupt flow to learn any rules. I was very impressed with this efficiency. We played the tutorial and dove straight into an adventure directly afterwards. It really didn’t feel like a steep learning curve.

This system is common to all the Unlock! Games and it is very simple to grasp. Equally, it is quick and intuitive so it doesn’t get in the way of the flow of the game – the clock is ticking after all!

Does it feel like a ‘real’ escape room? Remarkably, yes it does! Escape rooms attract plenty of first-timers who grasp the rules and have a blast. The simple efficiency of the Unlock! system does exactly the same thing. You’ll have no problem getting one out after dinner in the company of non-gamers. The tense adrenaline rush is there too. After only the tutorial, one of our group exhaled, “That was intense!” So the rush of success when you manage to escape is all there as well.

Escape rooms really reward teamwork and communication. Unlock! often gives a scattering of clue cards so your group can share them out and experience the shouted updates, the ‘pass-the-clue-for-a-second-opinions’, the ‘Oh! We must be missing somethings’ and the sudden revelations. Indeed, we felt a very similar rush to a ‘real’ escape room.

What the boxed versions have that the ‘real’ ones don’t is permission to access fantastical or impossible worlds. One of the Unlock! Mystery Adventures takes place underwater, another in the Oz of wizard fame - which you just can’t do in ‘reality’.

Some ‘escape room in a box’ games have a greater range of components to handle and examine, some demand that you tear or damage the components, some have code wheels or booklets. Unlock! is self-contained in its simple set of cards. All the complexity and housekeeping is done in the app. Escape room games like this never have acres of replay-ability. Once you’ve solved the puzzles, that’s it. On the other hand, with Unlock! you don’t find yourself being told to damage the game components so you could return to it later if you fail first time.

An intuitive system of play, genuine tension and atmospheric mysteries; Unlock! does the escape room right.