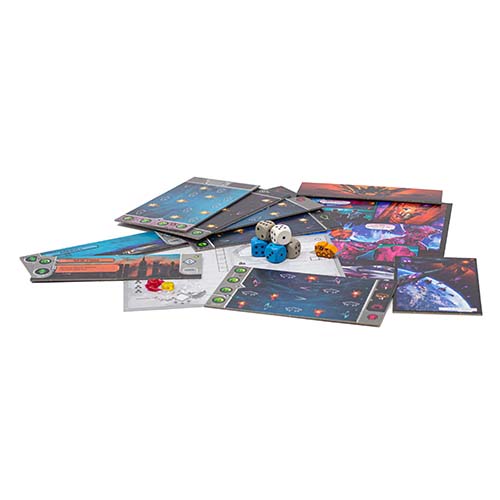 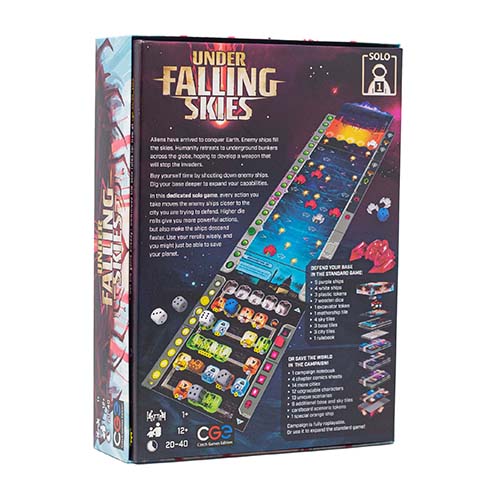 Under Falling SkiesUnder Falling Skies is a solo game that started life as nine card print and play on the Board Game Geek forums. This retail release sees major upgrades to the gameplay as it breaks free of the print and play restrictions. Setting the game up instantly brings space invaders to mind as you have five columns which alien invaders will move down towards the surface of …
Read More
Category Board Games Tags Best Sellers, BGG Golden Geek, Co-operative, Czech Games Edition, Golden Pear, Podcast Approved, Strategy, Zatu Platinum Award SKU ZBG-CGE00058 Availability 3+ in stock
Share
Share this
91%

Under Falling Skies is a solo game that started life as nine card print and play on the Board Game Geek forums. This retail release sees major upgrades to the gameplay as it breaks free of the print and play restrictions.

Setting the game up instantly brings space invaders to mind as you have five columns which alien invaders will move down towards the surface of the earth. You are the commander of an underground bunker and will issue orders via dice placement that not only powers your actions but also the speed at which the standard invader ships move. The motherships advance is more predictable moving one space down at the end of a turn - unless you cause it too move more!

Your underground facility starts off small but can be expanded as the game goes on, offering more options and better versions of them. At the start of a turn you will roll all five dice, three silver and two white, before placing a dice into the room you wish to use. Each column can only hold one die and after you have placed it you must move any ships in that column the value shown on the die placed.
If you placed a white dice you may reroll the other dice before placing more. Rooms will allow you to gain power, shoot down ships, hinder their movement and research the aliens. This last one is important because it is how to win the game.

The central decision of which dice to place where and when is pleasingly difficult. You are always aware of the sacrifices you are taking so even when you are getting what you need, it’s painful to advance the alien ships, knowing if you’d been less greedy you might have been better off.

To keep things interesting there are various boards including to increase the difficulty and a four chapter campaign featuring new mechanics and gameplay options. Under Falling Skies is a great package, and one that will win over most people to solo games.

Earth is in danger. Aliens have arrived and they have not come in peace. The sky is filled with enemy attack ships and dominating thee skies is the looming presence of the mothership. Humanity is disarray and has retreated into underground bunkers. It is up to you to defend your bunker, blast the alien ships out of the sky and research into ways to defeat the mothership in Under Falling Skies.

Under Falling Skies is a solo only dice rolling game that can be played as a standalone game or as part of a campaign. It is designed by Tomas Uhlir and published by Czech Games Edition with a playtime of around 30 minutes. On your turn, you will roll five dice, two white and three greys. These dice are allocated to rooms to generate power, perform research or man the guns. A die can also be used to excavate more rooms in your base. However, only one die can be placed in a single column. When a die is placed an enemy ship in the corresponding column moves the number of pips closer to your base.

If a ship moves far enough it will damage your bunker. Sustain too much damage and you lost the game. When a white die is placed, any other unused dice are re-rolled. As the enemy ships move down the board they may land on spaces move them to another column or allow them to be shot out of the sky.

After you have placed all your dice the mothership moves down and performs an action. Enemy ships that were shot down are respawned on the mother ship and the round begins again.

The ultimate aim is to advance to the top of the research track and win the game.

There are a number of bases you can play that have different abilities and various ways to make the game more difficult. There is also a mini-campaign where you play a number of games with varying changes to the gameplay. I am not going to talk about the campaign here as I don't want to spoil anything.

Under Falling Skies is a solo dice game that was originally a nine card print and play, before being picked up by CGE. So how does it play? Is it just a totally random dice rolling luck fest? Or is there more to it than meets the eye? Read on to find out more.

The Child of Two Greats

Under Falling Skies is effectively the birth child of a fantastic film (Independence Day) and a fantastic old school video game (Space Invaders). And what an astounding game it is. Set up is quick and easy. The rules are straight forward, but give you some amazingly tough choices to make. There is a real push and pull of wanting higher value dice as they are inherently more powerful to not wanting the enemy ships to move down to quick/far.

Defend, Research or Both?

The game is one tantalising puzzle. Where you place your dice and how far the ships move down, what actions you perform and how much you prioritise research vs defending your base make for some tough choices. The re-roll after placing a white die can be a blessing and a curse at the same time. Yet it adds to the tactical feel of the game. Being efficient with your die and your actions is absolutely key. If you are going to place a die on the space that destroys the enemy ships, you have to try your hardest to get as many ships on the relevant spaces as possible.

Excavation for the Win

It is essential that you excavate your base fully to be able to perform the last stage of the research track. This adds to the choices you have to make as you want/need to excavate a great deal. This will further progress the ships down towards your base. There are also rooms that can accommodate two dice giving you a powerful action. The double (and often triple) research rooms are a great way to really boost you along the research track.

The variability in the game makes the reply value very high. Not only are there a number of starting cities/bunkers to play but you can also flip over each section of the sky to increase the difficulty. Add to that the campaign "stuff" (which I am not going to talk about) and this game has staying power. The box is packed full of content to keep you playing again and again. Simple in its ruleset, easy setup, yet tough and seriously difficult choices makes this a game that I just love getting to the table. Games are always tight and often come down to the wire and I love the tension that Under Falling Skies provides.