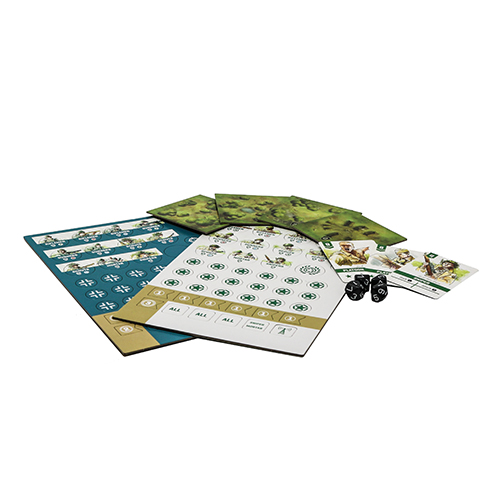 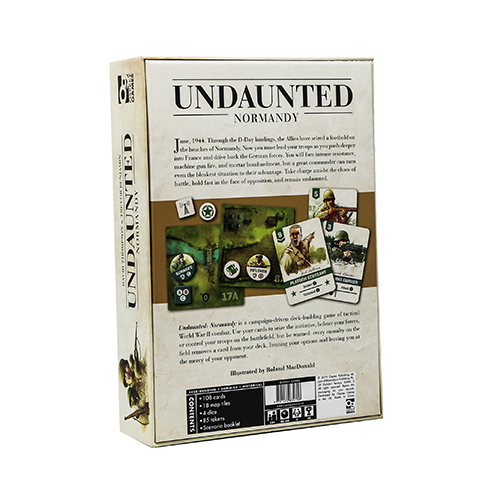 Undaunted: Normandy takes a historic war and mixes it with deck building and a modular board to provide a compelling campaign for two players. Deck building is a mechanic of changing the make up of your own personal deck of cards as you play the game. Unlike most other deck builders, shedding (getting rid of cards from your hand) useless cards won’t be top of your agenda here. The…
Read More
Category Board Games Tags Best Sellers, David Thompson (I), Dice Tower, Golden Pear, Great For Two, Osprey Games, Trevor Benjamin, Zatu Gold Award SKU ZBG-OSP4706 Availability 3+ in stock
Share
Share this

Undaunted: Normandy Undaunted: Normandy takes a historic war and mixes it with deck building and a modular board to provide a compelling campaign for two players. Deck building is a mechanic of changing the make up of your own personal deck of cards as you play the game. Unlike most other deck builders, shedding (getting rid of cards from your hand) useless cards won’t be top of your agenda here. The reason is that casualties received during the game remove that card from your deck. There are some useless cards that simulate the ‘fog of war’ but you’ll have to work around these in other ways! You’ll be using your deck to command your troops across a terrain made up of clearly illustrated tiles. You will want to be as tactical as possible in this movement though as the unit type, terrain type and range all dial into to a target number you must roll for a successful attack. Set up is quick for a deck building game, and the hand management proves more thoughtful thanks to the differences between it and other deck building games. Getting more cards into your deck strengthens the unit of the same name but is also making your deck bigger decreasing the chance of seeing the cards you need turning up often. If you don’t fancy playing through a campaign you can instead set up one off scenarios and switch sides after to get a feel of both. For a small box war game Undaunted offers a lot of gameplay and options. The series is being furthered with a stand alone North Africa game released and a Reinforcements pack that expands both games. Player count: 2 Time: 45-60 minutes Age rating: 14+

June, 1944: Through the D-Day landings, the Allies have seized a foothold on the beaches of Normandy. Now you must lead your troops forward as you push deeper into France and drive the German forces back. You will face intense resistance, machine gun fire, and mortar bombardment, but a great commander can turn the situation to their advantage!

Undaunted: Normandy is a deck-building game that places you and your opponent in command of American or German forces, fighting through a series of missions critical to the outcome of World War II. Use your cards to seize the initiative, bolster your forces, or control your troops on the battlefield. Strong leadership can turn the tide of battle in your favor, but reckless decisions could prove catastrophic as every casualty you take removes a card from your deck. Take charge amidst the chaos of battle, hold fast in the face of opposition, and remain undaunted.

Undaunted Normandy is a 2 player, platoon level, light war game from Osprey Games. It’s set following the Allied landings in Normandy in 1944 and pits German and US troops across 12 scenarios. Each scenario lasting about an hour during which the two sides vie to control key objective points and fulfil the victory conditions of the scenario.

The game combines deck-building with tactical unit movement and elegant but simple rules which deliver a thoughtful but pacey play experience.

Players place the square terrain tiles in an interlocking pattern as determined by the scenario brief. Then they add other relevant battlefield components: their starting units, spawn points and objective markers being the most important. They create their starting deck, and their scenario specific card supply from which they will be able to draft, again based on the scenario instructions. Once they have drawn their opening hand, they are ready to start. The first round of initiative goes to the specified player.

Each turn a player will draw four cards from their deck and then simultaneously and secretly discard one face down to determine initiative for the round – it’s a good chance to get rid of useless ‘fog of war’ cards but their low value is not going to win you back initiative if you opponent discards a higher value unit card in this phase.

Units can all move or attack and the type of unit (Rifleman, Gunner, Sniper, etc.) affects these characteristics. All units have other specific special functions such as scouting, concealing or recon. Combat itself involved rolling a number of d10, aiming for a target number. This is derived from the target unit type, terrain it is on and range. Some attacks suppress, which affects future activation, but normal damage is reflected by being forced to return unit cards from the hand/discard/deck to the box. If none remain when you are called on to discard, the unit is then removed from the board; if there are no remaining unit cards for that counter in the supply, it is removed from the game.

Decks also contain the useless ‘fog of war’ cards and managing these is another part of the challenge. Scouting terrain tiles, which allows other non-scout units movement access, adds fog cards to your deck. But you can also remove them from the game with a Scout’s recon action; or add them to opponent’s deck with a Conceal action.

The game ends with victory to the first team to capture objective tokens to the total value listed in the scenario or when all opponent Riflemen have been eliminated from the board.

How does it play

The simple answer is it plays really well and is a satisfying pacey small-unit war game, which I heartily recommend. Setup is quick and table presence is fairly compact – I have played this a couple of times in the pub. Turns fly, but there is sufficient tactical depth to make decisions meaningful.

Luck plays a significant role through your draw of cards and in rolling attack dice. The card play is interesting as adding to your deck improves the resilience of units on the board. Increasing the chance of being able to use that particular unit. However, it pads your deck. Thus decreases the likelihood of any other particular card you might want coming into your hand.

The flip side is that as units get hit by enemy fire you have to throw a card of theirs into the box. This reduces the likelihood of being able to access them again. Getting one step closer to removing a unit from the board or discarding it altogether. Balancing deck composition is critical. It is telling that there is the option of transferring cards from you hand back to your supply. As well as the more common route of trying to get cards out of your supply and into your deck.

The fog of war is also an interesting mechanic – it forces selective scouting and means you have to choose carefully where you want your other units to be able to move on the board. Dice rolls meanwhile are modified by circumstances – range, cover and target unit characteristics – so you can mitigate that aspect of luck to an extent. But then, it’s a war game and how many of those don’t have some aspect of luck?

I like the way that the rules expand to include the full array of units gradually as you play through scenarios. machine gun units appear first in scenarios two and three and sniper units appear in scenario four, for example. Consequently, you are not overwhelmed with too many unit specific rules while still trying to get a grip of the basic mechanics and how they play.

One point that needs making is that the scenarios don’t always feel balanced. The first scenario for example seems much easier to win as the Germans. However, I think you have to decide not to let that bug you. No scenario I have found is impossible to win as either side. If you take it in turns to play both sides through the same scenario you can challenge yourself to do better than your opponent when they were in your shoes. The scenarios are based on historical events, so of course they are not all perfectly balanced.

In some ways I could suggest this is a small box Memoir ’44, but while there are a lot of similarities, I prefer the fact that your card draw in Undaunted affects which units you can use but not which part of the board you have command over. My wargame tastes veer toward the lighter end but there is no lack of hard thinking in this game.

While I still prefer 878 Vikings as my ‘go to’ accessible war game, this is a much smaller and quicker option with plenty of crunch. I have played one off scenarios of this as a filler in a games night. Equally, I have spent an entire evening playing a number of scenarios through and trying both sides with each of the scenarios played. I can see why it has had a lot of positive press and it is well deserved.