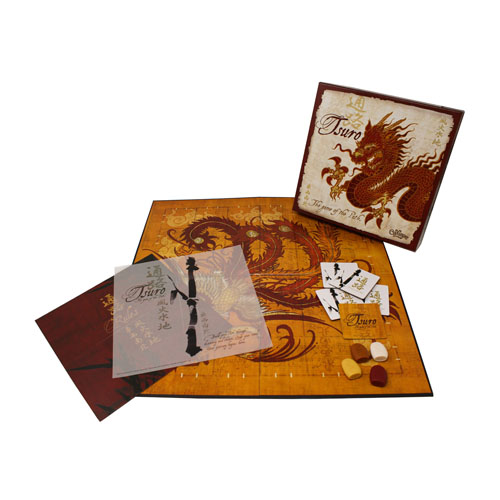 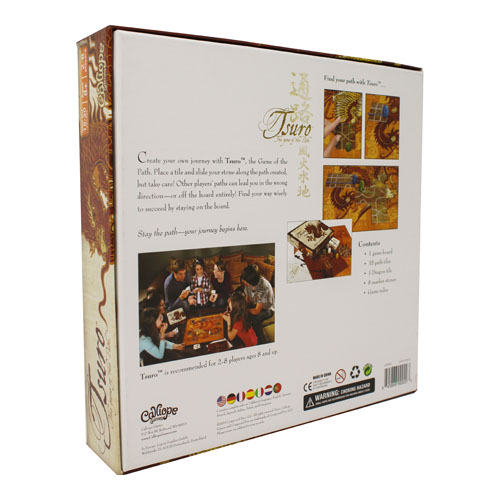 In Tsuro, create your own path without your opponents steering you in the wrong direction – or off the board! Tsuro is the quick-playing game in which directions can change as easily as the game plays. The rules are simple – you place your stones, select your tiles, and attempt to build a safe path for your journey. Paths will cross and connect and the choice you make wi…
Read More
Category Board Games Tags Best Sellers, Calliope Games, Great For Two, Pick Up and Play, Tom McMurchie, Tsuro, Zatu Platinum Award SKU ZBG-CLP020 Availability 3+ in stock
Share
Share this
90%

Tsuro, by Calliope Games, is about a “spiritual journey”, where there are many paths to take. Unfortunately, some of those paths lead straight off the board, itself! Aspects of hand management, tile-placement and abstract strategy are at play, here. In Tsuro, 2-8 players’ starting pieces (a lovely dragon stone) begin on the edge of the board. This is a 6x6 grid. Everyone has a hand of square tiles, with two pathways on them. Your turn consists of you placing one tile down adjacent to your player piece. You then have to travel along the path. You can rotate this tile any way you want. All pathways always lead off the tile, at either 90°, 180°, 270° or 360°. All dragons that are next to this new tile have to obey the pathway in front of them. This could cause them to move along multiple tiles. They move until they reach a tile’s edge. There’s often scenarios where this means having to exit off the board! In which case, that player gets eliminated. The aim of Tsuro is to be the last person standing. It’s interactive on a sky-high level, which is brilliant. Almost every time you place a tile, you could force another dragon to move! And then there’s Franz Vohwinkel’s artwork, which is a thing of beauty. It almost feels sinful to cover up the board’s Asian background design with your tiles. Games of Tsuro are quick, lasting no longer than 20 minutes. It’s a wonderful ‘filler’ game – like an aperitif before the main course. Only this aperitif you’ll want to sample again and again! Player count: 2-8 players Time: 15 minutes Age: 8+

Ever just fancied playing a game that is relaxing? Tsuro is just one of those games, where no stress will ever hit you. So why not create your own journey with Tsuro The Game of the Path. Place a tile and slide your stone along the path created, but take care. So where do we start, how do I go about explaining how a simple game plays?

Tsuro, known as the game of the path, is a fun, simple, relaxing tile-laying game, where up to eight players try to guide a Chinese dragon around the board without falling off the board or crashing into a fellow dragon. This is a game of last dragon standing wins.

From opening the box to the completion of the game, takes up to 20 mins if that, the only downside to this game is the simplicity, there is no reason why anyone should have to go back to the rules to check a ruling at all. What makes Tsuro really good is that it doesn’t matter if you have just two of you, or eight of you, the gameplay is equally just as good as you look to try in desperation to avoid the pesky opposition dragon stones.

So how does it play? Each player starts with three tiles, each tile will have eight points of contact with four lines, with each tile being able to join up with another tile. Each player takes a Dragon stone, and decides where they want to start by placing their stone along the side of the board at one of the many starting points.

Then going clockwise, each player will lay a tile and guide their dragon along the line they have chosen to follow. As more tiles are laid, more lines are created and as the dragons start to soar along the board, the potential of falling off the board or crash into another dragon increases.

That is the twist to the game, as tiles are laid and new lines are connected, any dragon on that line will be forced to follow the line irrespective of whether it is there turn or not.  Note at this point, the rules do not allow a player to place a tile away from their own dragon, each player must always connect their tile lines together for their dragon to move along.

The winner of the game is basically last dragon standing, so when you play this game, you will need the luck of the draw when laying your tiles, and hope that when someone else lays a tile it doesn’t affect your dragon badly.

There are 35 tiles to lay, and the eight dragon pieces are easy to the touch, they are lovingly created, with each piece having a Chinese dragon engraved into them.

Tsuro is just a game that can be played anywhere, and it will draw people forward to take a look because it just looks so simple to learn. Non-gamers will enjoy playing this game without any headaches. Sequels are out there to this game with Of the Seas and the expansion to this particular game, Veterans of the Sea.