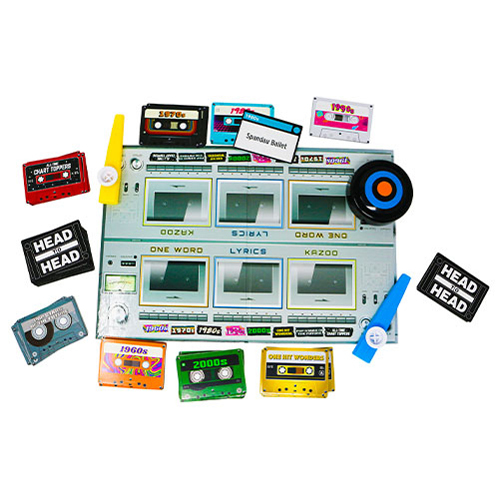 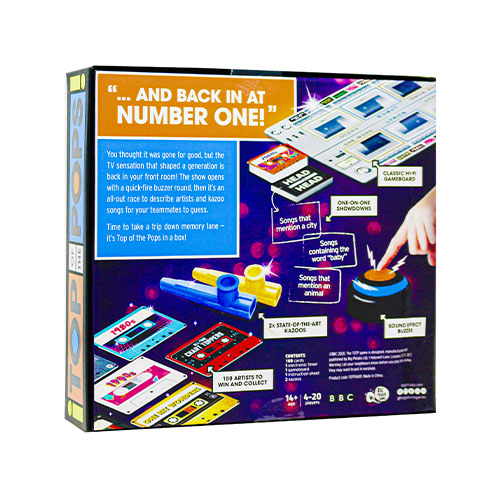 Top of the Pops

Relive your childhood and dive straight into the classic hit show Top of the Pops! Battle against your friends to give clues about songs and artists and hope your clues are good enough for your team to guess and to beat the timer! Each round, you will need to give a set of three clues for three different artists; one word to describe an artist, lyrics from a song by the artist and l…
Read More
Category Board Games Tags 6-8 Years, 9-11 Years, Best Sellers, Big Potato, Fun For All the Family, Sale SKU ZBP-TOTP01 Availability 3+ in stock
Share
Share this
82%

Relive your childhood and dive straight into the classic hit show Top of the Pops! Battle against your friends to give clues about songs and artists and hope your clues are good enough for your team to guess and to beat the timer!

Each round, you will need to give a set of three clues for three different artists; one word to describe an artist, lyrics from a song by the artist and lastly, you need to kazoo a song by the final artist.

For each correct guess, you get to keep the card and you take one step closer to victory! There are 8 categories to choose from, spanning the decades from the 60s to today, as well as one hit wonders and all-time chart toppers.

Pop your music hats on and get guessing in this brilliant throwback party game!

The Kazoo! Instrument of choice for frustrated musical maestros. Whether you love the jolly, gentle buzz of its merry melodies... Or loathe the rough, rasping grate of its jarring jangle. It will have a large influence on whether Top of the Pops from Big Potato Games is for you.

Top of the Pops Party Game - it does exactly what it says on the tin. You give clues for your team to guess based on the music of Top of the Pops. Note this last bit. Top of the Pops ran on the BBC from 1964 until 2006. Although there are endless repeats still shown today, it will regard such artists as Katie Perry, Adele, and Justin Bieber as "Pop Stars of the Future!" It's also mainstream, so not much in the way of Rap, Grime, Hip-hop, or Thrash Metal.

All the above, plus the fact you can explain the rules in a couple of minutes, make it a great choice for a family party. It's super fast to set up. A board like a retro tape deck, two decks of cards, a timer buzzer, and those two lovely kazoos.

You start with a head-to-head round, one person from each team against a 15-second buzzer. Draw a card, with categories such as "A Beatles song," "A song with "Hey" in the title" etc. Then start the timer. The first challenger gives an answer, then hits the buzzer for the second to respond. This continues until someone can't give an answer before they get timed out - with a lovely little guitar riff. Note there are no lists of correct answers, it's up to common consent whether an answer is right. Your teammates can't shout answers but they can hum songs to help jog your memory. How helpful half a dozen friends humming different songs can be is up to you to decide!

The winner now gets to draw the top nine cards from the categories deck. They pick three for their team to guess and pass the other six to the loser. They also pick three and discard the rest. You allocate these secretly to the three areas on the board. One Word, Lyrics, and (hurrah) Kazoo. You now get 30 seconds to get your team to guess the artists. With "One Word" you can repeat it but not change it. I felt this was a bit like CodeWord. Our examples included: "Respect" - Aretha Franklin, "Titanic" - Celine Dion and "Sweden" - Abba.

With "Lyrics" you can speak or sing any words from one of their songs. It doesn't even have to be right e.g. "My ears are alight" for Desmond Dekker as long as it doesn't include the artist's name. And, finally the piece de resistance, you kazoo (is that a verb?) a song from the artist's catalogue - my "Bohemian Rhapsody" for Queen was a wonder to behold and continued long after my team had guessed successfully!

You can hop from category to category and you flip over any artists your team guesses. If you get all three with time to spare you can then peek at your opponent's cards and try to steal the points by guessing them. We didn't really bother with this bit, but it depends on how competitive your group is. Finally, if you end up with a lot of cards in one category, you can discard three cards of the same category and steal a card from your opponents.

I loved Top of the Pops. The kazoos, of course, the clever and elegant timer, and the category cards that are well thought out. You might feel you don't know much about the 1960s but even the most modern millenial can find something for "Elvis Presley" or "The Rolling Stones". There is some strategy involved when you choose your cards - do you go for ones your team can guess easily or for categories you haven't got? The timer gives a slow tick and a short drum solo on the slow 30 seconds, then a fast tick and a guitar riff on the quick 15 seconds. The replayability is almost infinite, as you have almost the entire catalogue of major musical acts from the last half-century. The only caveat you might have to have a house rule not to use the same descriptor if an artist comes up a second time with the same group of players. Other than that get on and play this game. I must away to my kazoo. Toot-toot!