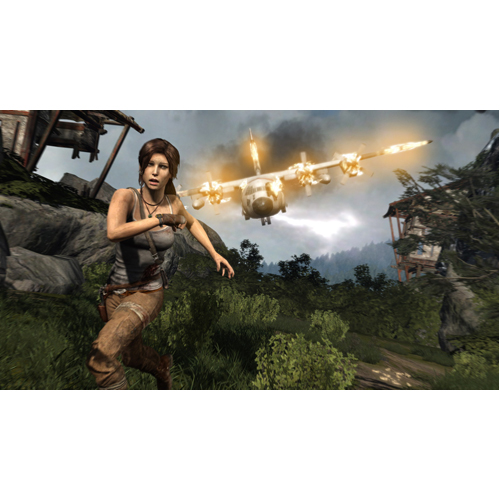 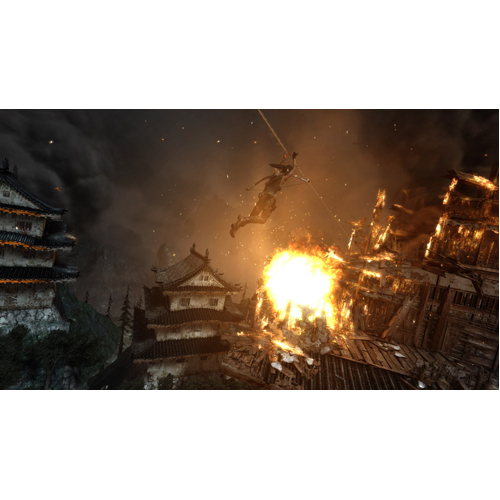 Pay in 3 interest-free payments on eligible purchases. Learn more
Success! We will let you know when this product is available again.
Your email address has been unsubscribed!
Your email address has been unsubscribed!
Notify me when this product is available to purchase!
This email address is already subscribed to this product!
Tomb Raider explores the intense origin story of Lara Croft and her ascent from a young woman to a hardened survivor. The Definitive Edition of the critically acclaimed action-adventure has been rebuilt for next-gen consoles, featuring an obsessively detailed Lara and a stunningly lifelike world. Endure high-octane combat, customize weapons and gear, and overcome grueling environmen…
Read More
Category Video Games Tags Action/Adventure Video Games, Software, Square Enix, Tomb Raider Video Games, Xbox One, Zatu Gold Award SKU VKM-SQU053.UK.RB Availability Out of stock
Share
Share this
83%

Tomb Raider explores the intense origin story of Lara Croft and her ascent from a young woman to a hardened survivor. The Definitive Edition of the critically acclaimed action-adventure has been rebuilt for next-gen consoles, featuring an obsessively detailed Lara and a stunningly lifelike world. Endure high-octane combat, customize weapons and gear, and overcome grueling environments to survive Lara’s first adventure.

Tomb Raider will mean something different to everyone that's played one of the games in the franchise; my memories go all the way back to the beginning in 1996. Over the years it's had its rivals and yet in this rebooted impression of a classic, Tomb Raider continues to entice us into adventuring with Lara. Tomb Raider was and still is the epitome of adventure gaming.

Lara Croft is an easy character to adore, admire, and envy. She's everything one would ever want from life: she's liked, she's fit and healthy. I appreciate these are all ideals, but that's what strong characters are. They're unrealistic; they're meant to be.

Even in her new guise, her character is equally as unattainable. That's why our favourite characters excite us so much; we see in them the ideal personification of ourselves. These characters are - on the whole - unflawed human beings, which is the antithesis of being human. Our individual flaws (as perceived by ourselves) are eradicated by the characters we choose as our vessels when playing video games, or reading books, et cetera.

In this reimagining of Tomb Raider, it seems the developers not only wanted to explore how Lara could be adapted to a changing audience but also to explore her character as she would a tomb; inquisitively. They achieve this by wandering down a path well-trodden; one taken by the likes of Batman and James Bond.

As Real As It Comes

Viewers - divulgers of mediums - thirst for realism at the character level. Inside that packet of characteristics is the word relatability. A character can be plonked in a far future, a millennia away, and still be relatable if they share a similar emotional structure with ourselves.

This type of realism has been coined gritty realism and is in essence a technique used to give unrealistic characters a degree of humaneness and therefore, vulnerability. Society - I'd go as far as using 'in general' here - has a habit of wanting to dethrone those that reach heights they dream of, and empathising with those who have been wronged or are in a position they themselves couldn't imagine. It makes sense then that these extraordinary personas are reduced to the emotional rubble that is human feeling so that we can say, 'they're like me'.

Tomb Raider, despite its classification as an action-adventure, was originally more adventure-puzzle-platformer. As the depiction of action increases in video games, it's clear to see that Tomb Raider, as it was then, is distanced from what we now perceive to be an action game. The majority of the game revolved around exploration and puzzle solving; climbing, swimming, navigating, and using levers to gain access to new areas.

The level design of the early games reflected her characteristics; the linearity of the levels weaved together with her personal narrative. This linearity is a representation of her purpose; her ardent determination. I always felt quite lonely playing as Lara Croft; the isolation intensified the journey. As an only child, I certainly felt as though I was going on an adventure; through Lara I was temporarily transformed into her character, and that metamorphosis allowed me passage to exciting locations that weren't quite so normal as my suburban upbringing.

Lara was forever on a mission, single-mindedly focused on her goal. This desire to continually improve herself is manifested physically by the gym - one that resembles a typical school gym - in her mansion. The school gym is meant for classes of pupils, whereas Lara needs one for herself; she's just that demanding of herself. The world then and the relics Lara seeks, are really a means for her to express her fortitude. They say the world is your oyster; for Lara, it reads, the world is your gauntlet.

The original Lara Croft, whilst dazzling, is a veritable stoic. Nothing affects her, which is of course what makes her so appealing. There comes a time, however, with all characters, when we need to know more. Their outer layers have to be peeled away, and we should have the chance to get to know them. If a character in a novel remained undescribed, other than simple observations and traits, we'd feel short-changed come the denouement; that moment when the protagonist 'wins' and we're left happy but unable to relate to the journey.

The most notable change in her character is her vulnerability at the beginning of the game. This is a Lara Croft who is setting out on her first expedition aboard a ship named Endurance - a signifier perhaps of the journey she's embarked upon.

Lara and the rest of the Endurance crew are stranded on a supposed lost island, a place where Lara believes the lost kingdom of Yamatai to exist. She sets out on the expedition after convincing the Nishimuras - descendants of the Yamatai and parents of her closest friend - of the theories she developed as an archaeology graduate.

After being dragged away from the shores she washed up on, it's time for her to escape from a cultish hideout. She's immediately impaled on a length of rebar after working herself loose from her bonds. She's covered in blood and moving wearily. This Lara is tired, confused and perhaps a little frightened - It's moments like these where I don't mind the character talking to themselves; a means of extrapolating character. Throughout the game, there are moments when she'll stumble, trip, lose her footing, and this adds to the reality of her inexperience. Though she's already seen much of the world, I got the impression that her fate - being washed up on the island - comes as a surprise even to her. This Lara didn't ask for trouble, she was on an adventure of discovery, not violence.

Although she disbelieved her father, she begins to realise that her late father's theories were accurate. The supernatural occurrences taking place on the island are too much for her to ignore.

The reboot introduces a wide variety of gameplay changes compared to the older instalments. The most unoriginal and obvious introduction is the crafting system. It encourages the player to gather materials via the usual means, as well as hunting with a bow, and to then use the materials to upgrade Lara's weapons and equipment.

I've never liked crafting unless it's directly relevant to the gameplay. On the surface, Tomb Raider warrants a crafting system: This is an adventure game and a survivor needs to be able to construct and improve their implements. However, this new rendering of Tomb raider is, most importantly, narrative-driven. And because the focus is on the narrative, regardless of the finite freedom to explore the small open areas, there are specific story beats that progress the gameplay. There's no freedom to change how the story is approached.

Now, if the narrative is pre-defined, it makes sense that her journey through the narrative should be pre-defined. Otherwise, from my perspective, I begin to question why I'm bothering to do anything outside the story; Tomb Raider isn't an open world where decisions matter. These additional time-wasters, when implemented half-heartedly, detract from the excellent adventure they achieved with this reboot.

Tomb Raider retains its tombs, which I suppose goes without saying. Though the 'puzzles' aren't at all difficult, the tombs are well-designed and the fun was in exploring them. If you enjoy taking screenshots, the tombs provide a good excuse. Although they didn't offer any challenge, navigating them was satisfying.

What Else Can I Do

The game design utilises a hub and spoke framework; players leave the hub to undertake key missions that advance the story. The missions usually follow a course that leads the player an alternate route back. Makeshift zip-lines are regularly used for traversing the platform layout of most locations. The zip-lines are activated by a bow; the weapon I used throughout the game.

The bow's multifunctionality makes it a great choice for those focussing on stealth. It can be used to silently kill enemies from short and long-range and is surprisingly adept at taking down multiple enemies in quick succession, especially once Lara's abilities are upgraded using the skill points awarded as the player receives XP.

A survival instinct ability highlights additional threats in the environment. In some games, this type of ability can be spammed, which creates a jarring gameplay experience. In Tomb Raider, I never felt the need to continually trigger the ability; I tended to use it when I was heavily outnumbered and needed to know who was killing me.

As the player progresses through the game, more weapons become available and Lara's abilities become more useful. These tend to be awarded to the player at key story events; usually when Lara is in a situation that calls for its specific use. I've always liked this implementation of skills; relating them to story beats feels realistic.

What I enjoyed most about my play-through was the rapport Lara built with her crew. From the beginning, I was curious to know what was going to become of everyone else on the island. My curiosity was stirred during the opening scenes as the Endurance breaks up; Lara is rescued by an arm that doesn't yet have a body or face. You can't show me an arm - an important arm - and then not have the story elaborate on that.

As the crew slowly merges, they begin to bond and each of them becomes an alternate facet of the character I believe Lara grows into. It's as though they're a piece of her personality and she draws those strengths from each of them.

Lara Croft has evolved from a focussed recluse dedicated to no one but herself, into an adventurer who works with and cares for those around her, and sometimes even relies on. She retains the zeal for her goal and Lara will always be ambitious; it's just good to see her more human; and yet, this human side doesn't make her weaker, only stronger. I wish I had someone like Lara around.