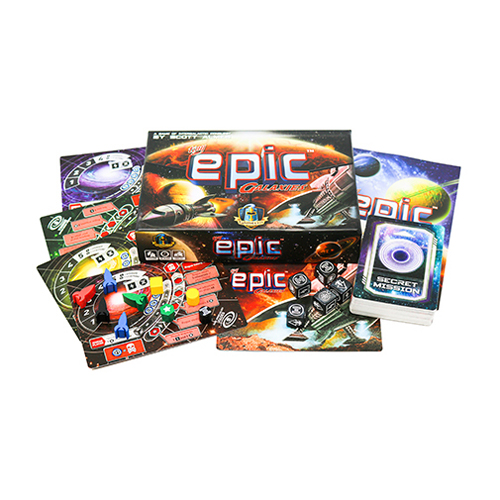 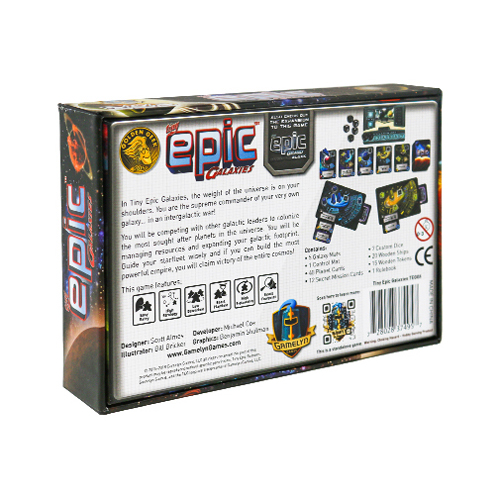 In Tiny Epic Galaxies each player controls a galactic empire, aiming to expand their influence by acquiring highly contested planets and increasing their cosmic armada. The game revolves around an innovative dice-rolling combo mechanic. The number of dice you roll is determined by the strength of your galaxy. Each die is engraved with symbols representing the various actions you can…
Read More
Category Board Games Tags BGG Golden Geek, Game Salute, Podcast Approved, Tiny Epic Galaxies, Zatu Gold Award SKU ZBG-GSTGMGTINY08 Availability 3+ in stock
Share
Share this
85%

Tiny Epic Galaxies comes from the highly popular Tiny Epic series, allowing players to take control of a galactic empire, their aim to grow and expand their influence by fighting over and obtaining planets while also growing their space fleet! Tiny Epic Galaxies, a game for 1-5 players utilises a dice-rolling combo mechanic where players will roll a number of dice (this number being determined by the level of their home planet) and then using the result of their roll to perform various actions, ranging from moving their ships from planet to planet, to increasing their power and culture to enable them to perform more powerful actions later in the game. Players must carefully plan their strategies to ensure they are utilising each turn to the best of their abilities, being sure to use very available action but also seeing which would be more beneficial. Players may, if they think it necessary, sacrifice two dice to produce a result they feel would benefit their colony better but be careful, as players can also choose to follow your actions, even when it’s not their turn! There will be various planets within players range throughout the game and they are able to colonise these at each available opportunity. Players can choose to either land on the planet, gaining the benefit listed or, if they are ready to commit a ship to the cause, can head into orbit, in an attempt to colonise and claim the planet, not only adding an ability to the player’s roster, but also increasing their victory point total! Players will also have a secret objective that they may complete to obtain further victory points which will assist them in gaining victory over the other players. With careful planning, a player can strategically spend their resources to ensure they are getting the greatest return from the actions they take and will ensure a victory for that player. Will you be able to take control of the more powerful planets before the others? Will that secret objective steer you to a more powerful position? Will your empire finally stand victorious over the rest? Player Count: 1-5 Time: 30-60 Minutes Age: 14+

If someone mentioned Gamelyn Games to me I would instantly think of the Tiny Epic Series. This is a series of small box games that have a short playtime but also have an in depth rule set. Tiny Epic Galaxies is one of the most well-known and popular games in this series and I wanted to see what all the fuss was about.

Tiny Epic Galaxies is a game where 1-5 players compete to conquer the Galaxy and it plays in around 30 minutes. You must develop your empire and colonise planets to score points and become the strongest galaxy.

The box it comes in is tiny (hence the name) but the number and quality of the components is very good. The art on the front is the typical colourful style you would expect from Gamelyn and it serves its purpose very well. The game has a neat easy to read rule book whilst the dice have symbols on them that relate to in game actions.

The art really shines on the player cards, planet cards and mission cards though and these carry the same colourful style from the box into the game.

How to Play Tiny Epic Galaxies

Each player is given a Galaxy card (your player mat where your score, dice and ships are tracked) and a number of ships and other markers along with two secret mission cards. Players choose one of the mission cards and slides it under their Galaxy card, the mission is a way of scoring bonus points when the game ends.

The game is simple roll the amount of dice and perform actions relating to the symbols rolled.

Players continue to do the above actions while upgrading the amount of ships and dice they have and this carries on until one player has reached 21 victory points.

The game is very dice heavy and as I said above this concerned me as I am not a fan of games that have a huge amount of luck involved (games need some luck to remain fun for players of all different skill levels).

What Tiny Epic Galaxies does to mitigate the dice is very clever though, the way you must lock in dice to how you can spend energy to re-roll one really gives players some tactical thinking. There is even a dice converter placement area where you can convert two dice into the one you really want. This makes Tiny Epic Galaxies a great little game that requires players to think ahead while still having enough luck to make it enjoyable and unpredictable.

The game also has a very good solo mode that I must say is just as good as the multiplayer offering, which is rare. In this you play against a Galactic Empire that has gone rogue, and you compete against it to try to save the world. The actions basically remain the same as the set up and it took me several attempts to win this so it’s very challenging.

If you are after a game with a small box but with a lot of depth then this is for you. The game is challenging enough to keep you engaged, player interaction is helped with the follow player action. (When a player activates a die, players can choose to mimic that action for the cost of 1 culture).

The play time (around 40 minutes to an hour in my experience) is great and the game never out stays its welcome.  The components are of good quality and for the cost of around £30 you should get a lot of play out of this.