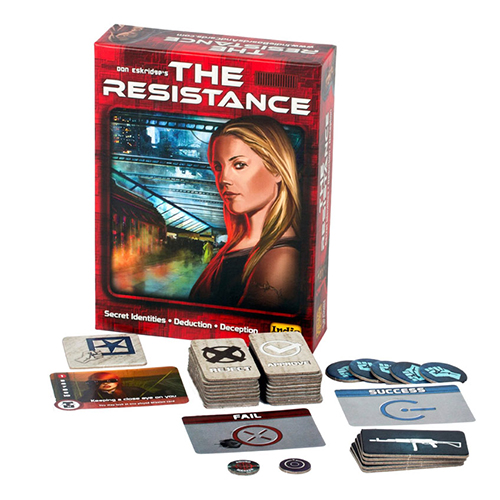 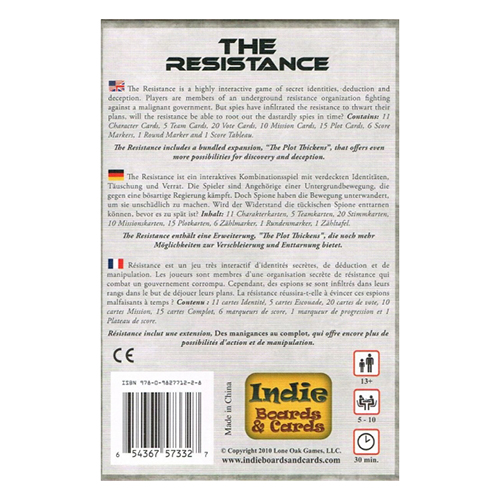 RRP: £19.99
NOW £15.50
RRP £19.99
Earn 1550 Victory Points
Success! We will let you know when this product is available again.
Your email address has been unsubscribed!
Your email address has been unsubscribed!
Notify me when this product is available to purchase!
This email address is already subscribed to this product!
The Resistance is a social deduction game that will have groups of up to 10 people talking, laughing and making wild accusations long into the night. The hit game from designer Don Eskridge and publisher Indie Boards & Cards is almost 10-years-old and has seen off the challenge of many newer social deduction games to remain at the top of its class. The game’s system is simple.…
Read More
Category Board Games Tags Golden Pear, Indie Board & Cards, Podcast Approved, Spy Games, The Resistance SKU ZBG-IBCRES3 Availability Out of stock
Share
Share this
90%

The Resistance is a social deduction game that will have groups of up to 10 people talking, laughing and making wild accusations long into the night. The hit game from designer Don Eskridge and publisher Indie Boards & Cards is almost 10-years-old and has seen off the challenge of many newer social deduction games to remain at the top of its class. The game’s system is simple. In your group, most people will be members of the resistance and a couple will be government spies trying to infiltrate them and bring them down. The spies know everyone’s identity, but the resistance members don’t know who they can trust. Each round, the designated leader will pick a team to go with them on a mission. If the team passes a group vote, the mission goes ahead and each team member secretly chooses a Pass or Fail card. If there’s at least one Fail in there, the mission goes in favour of the spies. The first team to win three missions wins the game. Beyond those basic mechanics, The Resistance leaves everything open for players to debate and discuss. Can the spies go undetected, perhaps casting suspicion on an upstanding member of the resistance? Can the resistance members spot the spies and, importantly, convince their teammates without looking shifty themselves? The Resistance will put your group to the test to see how well you really know if someone’s telling the truth. Very few games give players the joys of genuine surprise when something goes differently to how they expected, or the thrill of being proved right. With games lasting no more than half an hour, these emotional highs will keep you coming back to it again and again. The Resistance is a true triumph of a social deduction game. Buy your copy online today. Player count: 5-10 Time: 30 minutes Age rating: 13+

Imagine yourself in the near future, the world…run by a corrupt government, their power limitless. The corruption has sunk its roots so deep that the chance of change by conventional means is long gone. Enough is enough, you need to do something, so you join a group of like-minded people and start throwing crazy ideas around about sabotaging key structures, destroying banking mainframes or maybe just assignations…anything to bring this government to its knees…for you are The Resistance.

So before I go any further let’s cover the basics, The Resistance is a five to 10-player game in which throughout five missions you have to try and determine which of your fellow Resistance members you can trust and which are actually government spies planted to sabotage your missions. If the spies win three victories…game over.

The Resistance is such an easy game to set up it literally takes a minute. Once you’ve worked out how many people are playing, you select the tableaus that match, and then work out the number of spies and resistance members you need.

Deal out a card's character, a success and reject vote tokens to each character and then appoint somebody the leader. Set the tableaus in the middle of everyone with the markers on and put everything else in piles next to it…easy as!

How you do it

From this moment the mission can be broken into four parts.

The leader (rotates clockwise after each mission or failed attempt at getting a mission together) chooses a team they would like to go on the mission by handing out the team tokens. Below the mission number on the tableaus tells the leader how many people they need to choose and if there are any special win/fail conditions such as two fails needed to fail the mission.

Once the leader has chosen, it’s time for the players to vote whether they approve of the mission or want to reject it. Once everyone has decided, all the players put their chosen vote tokens facedown, everybody at once then turns them over to reveal whether it’s going to go ahead. For it to pass there needs to be a majority approving the mission, if it’s a tie then it’s failed.

So what happens if it’s rejected? Well if the mission is rejected then you move the vote token up the voting track, if this reaches five then the spies win. Also the leader token moves clockwise to the next player.

If the mission was approved then you deal a success and fail card to each mission member, they mix them up and place the card that they want to play on a mission pile face down and the one they don’t on a discard pile also face down. It’s worth saying at this point the spies don’t have to play the fail card, sometimes it’s not in their best interest to play it if multiple spies are on the same mission which would put them off being chosen for later missions. It is essential that both these piles are shuffled by the leader before you reveal the results.

The leader reveals the cards and you can work out whether the mission passed or if the spies managed to sabotage your efforts.

Once you’ve established whether it’s a mission pass or fail you can add a score marker to the mission track, blue for a pass or red for fail. After this, you rotate the leader token to the next player and repeat the four parts.

So that was a quick overview of The Resistance, the magic that I feel this game has is that it seems to bring the worst out of the people you are playing with...honestly I played with a group of people that I know really well, one of them I have known for 20 years, and I saw a different side of this guy. People will lie directly to your face, deflect suspicion onto other players and make you feel isolated and you will find yourself saying the following five things:

The great thing about The Resistance is that you can say anything at any point in the game, so if you’re the spy you can try and put people off your scent and either shift the blame onto another player or send one of your fellow spies down the river to protect yourself - so you still have a chance of being picked for missions.

Every game you play of The Resistance is going to be different, there are so many different tactics you can try each game which really keeps the game feeling fresh.

So the Third Edition of Resistance (available here) comes with the Inquisitor Module (Best used in games of seven players and up). The Inquisitor token starts to the right of the leader and then after the second mission is resolved they can immediately ask to examine a players character card. The Inquisitor may talk with other players, but cannot reveal the character card that they have seen. The Inquisitor then passes the token to the player that they examined and that player can then use this after the third mission and pass it on for use on the forth.

This can be used if you want to mix the game up a bit or if you’re feeling that the spies are winning too often and the resistance needs more information to work out who to trust.

Final thoughts on The Resistance

So I loved this game, it’s easy to pick up and you can get so heavily involved in it. The box said it lasts 30 minutes, personally, I found the games lasted a bit longer mainly due to the amount of shouting that took place and it did make me wonder if some of the couples I played with would still be together after. I feel like this is a great after dinner game or if you just want something quick and simple to play while you have some friends around.

Because everybody is talking throughout nobody ever feels like they are left out. People can feel a bit beaten however when people believe you’re a spy and nothing you say can persuade them otherwise. You do have the satisfaction at the end of telling people you told them so when you were wrongfully accused…so every cloud!

One word of advice though is to put card protectors on the cards, I found when people were lying they tended to play with the cards.