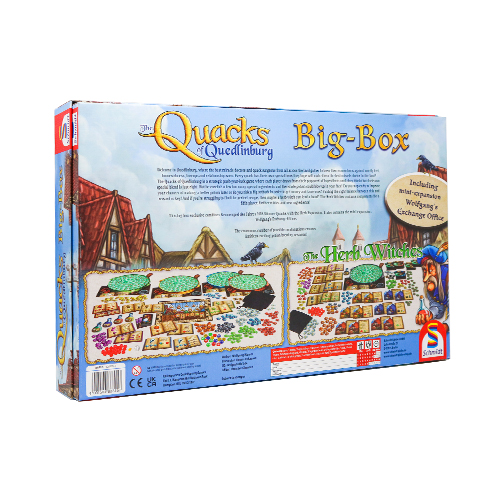 The Quacks of Quedlinburg: Big-Box

Pay in 3 interest-free payments on eligible purchases. Learn more
Success! We will let you know when this product is available again.
Your email address has been unsubscribed!
Your email address has been unsubscribed!
Notify me when this product is available to purchase!
This email address is already subscribed to this product!
The Quacks of Quedlinburg elevated designer Wolfgang Warsch into stardom! His bag-building, potion-making, push-your-luck title has captured the hearts of boardgamers everywhere. Due to its immense popularity, an expansion soon landed – The Herb Witches. Now, thanks to publishers Schmidt Spiele, Quacks of Quedlinburg has a Big Box! Big Box, you ask? That’s right: this combines …
Read More
Category Board Games Tag Best Sellers SKU TCS-QUACK_BIG_BOX Availability Out of stock
Share
Share this
89%

The Quacks of Quedlinburg elevated designer Wolfgang Warsch into stardom! His bag-building, potion-making, push-your-luck title has captured the hearts of boardgamers everywhere. Due to its immense popularity, an expansion soon landed – The Herb Witches. Now, thanks to publishers Schmidt Spiele, Quacks of Quedlinburg has a Big Box!

Big Box, you ask? That’s right: this combines both The Quacks of Quedlinburg and The Herb Witches into one big, erm… box. In the base game of Quacks, 2-5 players compete at the Quedlinburg fayre to brew the best concoction. You start with a bag full of basic ingredients, and you draw them one at a time. Each ingredient you toss into your cauldron, the further around the spiral it goes. And the further your spiral progresses, the more impressive your potion. The more money it’s worth. But beware… If you add in too many cherry bombs, your pot’s going to go boom! Say goodbye to your eyebrows – and the respect of the crowd!

You can stop drawing tokens whenever you like. But that’s the clincher: how lucky do you feel? Could you risk one or two more ingredients? If you stop before the explosion threshold, you earn money to spend on better ingredients to add into your bag. Plus points. Precious victory points! If you blow up, you only earn one of these two rewards. And that’s bitter medicine to swallow!

The Herb Witches, meanwhile, adds in extra Ingredient Books. These provide even more modular possibilities. You can mix and match these during set-up to help create a ton of variety with regards to bag-building. The Witches themselves also grant the players powers. Spend them wisely, and you could reap the rewards. There’s also a promotional mini-module included in this Big Box: Wolfgang’s Exchange Office.

The Quacks of Quedlinburg: Big Box provides all the fun and variety you could ever need. We’ve said it once, we’ll say it again: be careful around those cherry bombs…

Quacks of Quedlinburg was one of the last games I played with friends before we all had to go about living our lives in a state of isolation, constantly checking the snack cupboard to see if some chocolate biscuits had magically appeared. I remembered enjoying it. It was nice and straight forward. I remember thinking, ‘Gosh, I sure hope I get to play this again soon’. Well, that didn’t really happen. Until now! I was asked to take a look at the new Quacks of Quedlinburg: Big Box edition. This is stuffed with the base game and the Herb Witches expansion. They also added in a brand new mini-expansion for good measure!

Is There A Doctor In The House?

For those not in the know, Quacks of Quedlinburg is a 2018 game of bag building and pushing your luck. To give you an idea of how highly regarded it is, it walked away with the Kennerspiel des Jahres, an award given for the best expert game released that year. I think the only thing I would contest there would be the 'expert' label, as it is not as heavy as some of the other games to win the award.

Nit-picking aside, this is a wonderful game. Players will take on the role of potion brewers who are looking to brew the best potions possible over the course of the game. You’ll do this by pulling ingredient tokens out of your own personal bag of possible ingredients. You’re trying to get as far along the ingredient track as you can before giving up or your potion exploding. At the end of each round, you’ll have a chance to buy a few new ingredients to add to your bag of foodstuffs. Each of the different ingredients has a unique ability that can trigger to give you a little bonus. They are mostly good, with the exception of one, the cherry bomb.

This is where the push-your-luck comes in. You see, as you draw ingredients out of your bag, you place them onto your cauldron board. If the total value of cherry bombs is ever greater than 7, your pot explodes and the round is over for you! There are a few ways of mitigating this. But a lot of the time you will sit there fondling your chits in your ingredient bag, desperately trying to work out the odds that this is all going to go catastrophically wrong.

Quacks Of Quedlinburg - The Maths Of Cooking Up A Treat

You’ve done the maths; the odds are on your side! There are 7 chits left in the bag and only one could prematurely end your turn; you pull out an ingredient and there it is. The only thing you didn’t want. Your cauldron explodes. Your friends will laugh, and it is funny to watch. But you’re always aware, next turn it could be you.

The base game has 4 different sets of ingredients that work well with each other. You can also just mix and match a little bit of everything together if you want to try something a little different. Your cauldron board is also double-sided with one-sided having an advanced mode to give you another track to advance along for rewards.

But that isn’t all you get in The Quacks of Quedlinburg: Big Box. You also get the first expansion, The Herb Witches. This expansion comes with all the bits and pieces you need to add a 5th player to the game. I can absolutely recommend that. With most of the game being played simultaneously, adding more people to the game just makes it more fun with very little time difference. I wholeheartedly recommend it!

Enlisting The Masters Of The Trade

Next up we’ve got the titular Quacks Of Quedlinburg Herb Witches. These pro potion brewers will lend a hand if the price is right. Each player now starts the game with 3 coins. During the game, players can toss a coin to a herb witch to use her special ability. There are 3 types of herb witch and each of those has 4 variations in the box. These can all be mixed and matched as you see fit to give plenty of possible combinations.

Now, these abilities are powerful! Almost game-breaking in places. But you only get to use each witch once during the whole game, so you have to try and pick your moment to get the most out of them.

Next up in the expansion is an overflow bowl for each player. This means that if a player manages to fill up their bowl, they can still keep drawing tokens to get an even bigger bonus at the end of the round. Now, confession time. I’ve never once filled my bowl with ingredients. I’ve come close once or twice, but I’ve never quite managed to pull it off. So I’ve never used one of these overflow bowls. But they sure do look nice.

Lastly, with the Herb Witches expansion is another 2 variations for each ingredient in the base game. Well, except for pumpkins which only gets one. But there is also a brand new ingredient! This last ingredient is a bit of a wild card, as its value changes depending on when it is used. I’ve quite enjoyed using this one, although I will admit: the version of this ingredient that has it copy the last token you played can be very hit-and-miss. If you manage to duplicate your best ingredient, you’re laughing, but if it duplicates your humble pumpkin, you might just shed a tear.

So, the Herb Witches is exactly what I like from an expansion. A bit more variety of everything you love from the base game, as well as a few new bits to spice it up. It’s a great little package that doesn’t really add much complexity to the base game whilst making it a little richer. So that’s a thumbs up from me.

The Hair In The Soup?

Finally in The Quacks of Quedlinburg: Big Box, you’ve got what is probably the most contentious addition. The exclusive “Wolfgang’s Exchange Office” mini-expansion. As far as I’m aware, this big box is the only place you can get it. The exchange office adds a little track that players can progress along. This can give you one of two abilities, depending on which side you are playing with. On one side, you boost your end game score by earning some points for your remaining ingredients in the bag. Alternatively, the other side gives you the ability to buy victory points during the game. The further along the track you move, the cheaper they get to buy.

Now I am going to say that this is my least favourite thing in the box. It’s fine enough but it adds another thing to keep track of for not much return in fun times. I don’t find myself clamouring to play with it, especially compared to trying out some new ingredients or herb witch abilities.

The Potion Is Coming To The Boil

And that is The Quacks Of Quedlinburg: Big Box. Should you pick it up? If you’re considering picking up the base game, I’d go for the Big Box instead. It doesn’t cost that much more and I’ve yet to play Quacks with somebody who wasn’t excited to try out the expansion next. If you’ve already got the base game and you’re after that mini-expansion, I’d skip it. It’s just not worth it.

One thing worth mentioning is that this big box doesn’t include the new Alchemists expansion. I’ve not played it yet, though I have ordered it, so I can’t tell you if it is good or not. What I can say is that there is probably enough room in the Big Box to store that expansion too.

So, there we have it. The Quacks of Quedlingburg: Big Box! A brilliant way to get into one of the best games of the last few years!