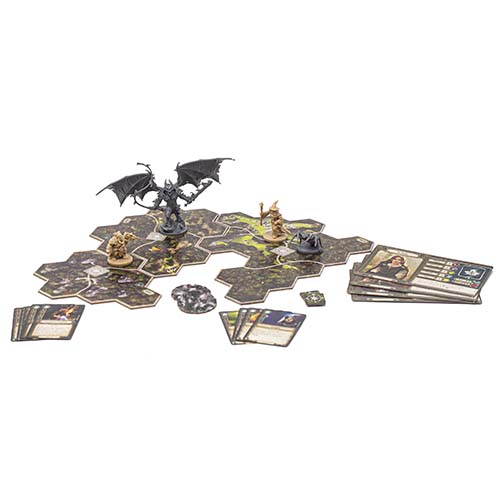 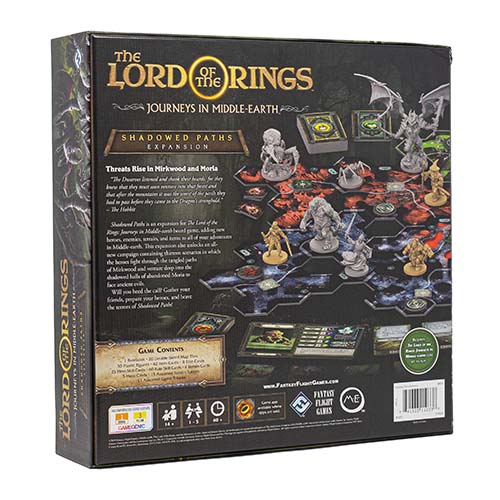 The Lord of the Rings: Journeys in Middle-Earth – Shadowed Paths Expansion

you could earn 6848 victory points

you could earn 6848 victory points

Expand your adventures across Middle-earth with the Shadowed Paths expansion for The Lord of the Rings: Journeys in Middle-earth! This expansion adds new heroes, enemies, terrain, and items to all of your adventures, unlocking more ways for you to explore this iconic land. Meanwhile, an all-new campaign containing thirteen scenarios invites you to walk the tangled paths of Mirkw…
Read More
Category Board Games Tags Companion App, The Lord of the Rings: Journeys in Middle Earth, Zatu Platinum Award SKU ZBG-FFGJME05 Availability 3+ in stock
Share
Share this
98%

Expand your adventures across Middle-earth with the Shadowed Paths expansion for The Lord of the Rings: Journeys in Middle-earth! This expansion adds new heroes, enemies, terrain, and items to all of your adventures, unlocking more ways for you to explore this iconic land. Meanwhile, an all-new campaign containing thirteen scenarios invites you to walk the tangled paths of Mirkwood and venture into the shadowed halls of abandoned Moria to face ancient evils. Will you heed the call? Prepare your heroes and brave the terrors of Shadowed Paths!

When the original Journeys in Middle-Earth came out it was the most I had anticipated a game ever. At last, a Lord of The Rings game that would allow me to explore and battle as my favourite characters from the universe. No longer would my forays into Middle-Earth be limited to watching all three extended edition Peter Jackson movies in one day (we don’t mention The Hobbit trilogy, ok).

What’s more this was a Lord of The Rings game that didn’t take as long to play as reading the books (ahem, War of The Ring). I might actually be able to get friends to play it. And heck, if not, it had a banging solo mode.

The Shadow Deepens, Though Hope Yet Endures

So, I was a little underwhelmed, when rushing home with the ginormous box on the week of release, I found the first campaign a little flat. Missions were repetitive; move here, kill that, find this. There was never enough time to explore the richness of the world. The theme felt pasted on.

Luckily the DLC campaign, Hunt For The Ember Crown, and a more forgiving adventure mode fixed this and allowed the game to shine both in terms of mechanism and narrative. But what of this new expansion which I had on preorder since the start of the year? Will its Shadowed Paths lead to ever more illustrious adventures, or will it lead to a black pit of despairing disappointment? Spoiler: Journeys in Middle-Earth is now my favourite game of all time.

The Fullership of The Ring

Shadowed Paths is no small box expansion. It takes the innovations hinted at in Hunt for the Ember Crown and applies them beast mode. In the box are five new heroes including Arwen and Gandalf (a disappointing omission from the base game). A ton of monsters ranging from spear chucking pit goblins to the fearsome Balrog disturbed from the darkest pits of Moria. Lots and lots of spiders!

There are also new map and terrain tiles that introduce new mechanisms into play. Sticky webs will carpet the Mirkwood slowing your heroes down. Elevated land will add range and defence to hero and monster attacks. Your heroes will encounter difficult terrain that could halt their wandering altogether.

42 items, 3 titles, 25 hero skill cards and 60 role skill cards bring new powers and strategies and bolster your decks and set up options. Then there is the fact the story branches into a series of mini campaigns that give you choice over the order you play the adventures in. The adventures themselves feel more varied; skirmishes, puzzles, explorations and searches create an engrossing and immersive story in the heartlands of the dwarves and elves.

Lastly, the new mysterious corruption mechanism which allows you to act faster or avoid dangers in the short-term but might come back to haunt you later in the game. No spoilers, but the word corruption has never been a positive one, right?

As an expansion, Shadowed Paths gave me everything I wanted and more. Thanks to Fantasy Flight being ahead of the curve when it comes to app support for games, a neat and obvious bonus is that the expansion content can be back ported into the previous two campaigns. I haven’t fully tested this yet, but you can play Bones of Arnor with the new characters and may just see some familiar faces crop up enemy wise from Shadowed Paths.

It feels like I have grown along with Journeys in Middle-Earth and it’s been great to watch it develop and flourish. I wasn’t sure at first, but each new campaign brings subtle changes that innovate and improve. Unlike some expansions, these changes seem natural and not overly complicated. Like the designers are having fun exploring the world and uncovering new paths too.

With this add on the game completely gives me what the first campaign didn’t. I am getting to play around in Middle-Earth as an active participant in new stories in the folklore. There won’t be another Peter Jackson Lord of The Rings Movie, probably, and there definitely won’t be another Tolkien book. Journeys in Middle-Earth is now the place I go to for my elf and hobbit fix.

There and Back Again

In summary, Shadowed Paths increases the depth of theme and replayability of all three campaigns thanks to its wealth of content and back compatibility. It is a game that, no sooner have I finished I want to delve back in again with a different combination of characters and roles. It’s my most played game for a reason. I can’t wait to try the first campaign again with new friends, maybe taking a party consisting entirely of dwarves.

If you already have the base game and maybe the Villains of Eriador minis pack then definitely save up and get this. I, for one, can’t wait to see where they go next – Gondor? Osgiliath? Mount Doom itself? Maybe we’ll meet more wizards; Saruman or Radgast. I don’t know what Fantasy Flight have up their sleeves but I am pumped to see it after Shadowed Paths