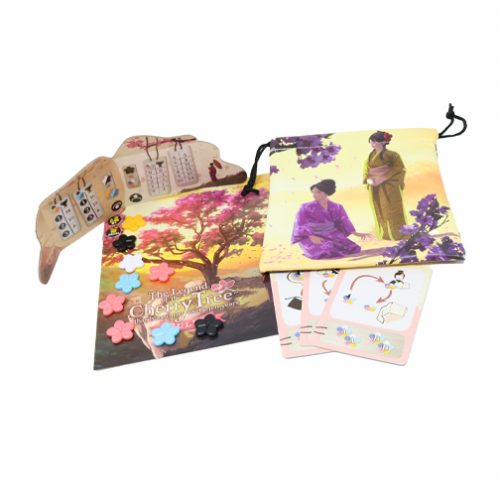 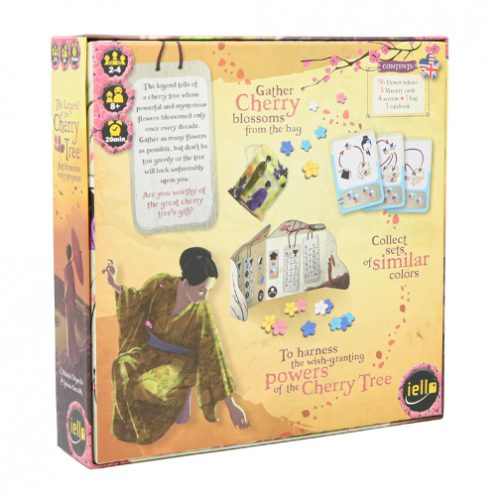 The Legend of the Cherry Tree

you could earn 1627 victory points

you could earn 1627 victory points

Do you know the legend of the cherry tree that blossomed every ten years? The story goes that once every decade, the cherry tree would shroud itself in beautiful flowers during the first days of spring. Thousands of buds grew on its branches and stretched elegantly toward the sky before becoming magnificent flowers of inestimable quality. When the flowers on the cherry tree begin to…
Read More
Category Board Games Tag Zatu Gold Award SKU ZBG-CHERRY Availability 3 in stock
Share
Share this
80%

Do you know the legend of the cherry tree that blossomed every ten years? The story goes that once every decade, the cherry tree would shroud itself in beautiful flowers during the first days of spring. Thousands of buds grew on its branches and stretched elegantly toward the sky before becoming magnificent flowers of inestimable quality.

When the flowers on the cherry tree begin to fall softly to the ground, you rush to collect them before they wither: The one who can gather the most flowers will have their wish granted by the cherry tree. But if you are too greedy, the cherry tree will find you unworthy of its gift, and you will lose the chance to make your dream come true...

Have you heard of The Legend of the Cherry Tree? Myth has it that once every 10 years the cherry tree will shed her flowers and whoever collects the most flowers before they wither will be granted a wish. However, the cherry tree doesn't look too kindly on those that are greedy. If you take too much you will be found unworthy of its gift. Can you collect the right flowers at the right time and please the cherry tree?

The Legend of the Cherry Tree is a quick-to-play set collection game with push you luck mechanics for two to four players. The pretty art style and components drew me to the game, but I stayed for the tension, the risk taking, and the interesting choices.

Getting ready to play is fairly simple.

Firstly, you'll need to add the flower tokens to the bag, depending on your player count. You'll then decide whether to play a regular or an advanced game, and you'll flip the three Mastery cards to the correct side. Lastly, each player will take a screen and place it in front of them.

And that's all! You're ready to start collecting some flowers!

The flower tokens come in 6 colours; yellow, pink, light blue, dark blue, white and black. The importance of these colours comes into play in all phases of the game and the black flowers count as different colours depending on which phase of the game you're in. (Which I'll mention later.)

When your turn begins, you'll draw flowers blindly from the bag and place them in the centre of the play area for all players to see. These flowers don't belong to you just yet, as you'll need to complete your draw(s) without fulfilling certain requirements.

If any of these occur, you have failed your draw. And whilst this isn't the end of your turn, your collection options will be limited.

This is where the push your luck element really shines. I'm not usually a big risk taker in games. I prefer to play it safe and stick with what I have. But here, pushing your luck can have really big rewards. The three Mastery cards each have unique powers that can really help your game AND if you do end up 'failing' your collection, you're still allowed to collect some flowers to help your end goal strategies.

It's important to note here that black flowers are wild! And they count as the colour that could do you most harm and make your collection fail. So if you've drawn 2 yellows and decide to take another turn and draw a black flower, your collection fails, as the black flower now counts as though it was a yellow flower.  It's harsh, but it makes the risk much more thrilling!

If your collection was successful (you collect flowers from the bag up to three times without breaking any of the collection rules) then you may now move those flowers into your personal collection.

Before this, you'll check to see if you managed to achieve any of the three Mastery cards and take any bonus you've received (if you wish to).

At this point (I believe - the rulebook is a little unclear) the black flowers count as their own unique colour. You cannot move anyone colour and a black flower behind your screen, even though once it is in your collection, either in front of or behind your screen it is once again a wild colour of your choice.

During your turn, you may draw flowers (as many as you wish) up to three times. You can stop at any point you wish, but three is the maximum amount of draws you may take.

If at any point you complete one of the forbidden conditions your draw is considered unsuccessful - you got too greedy!

The Mastery cards in The Legend of the Cherry Tree are double sided. Blue side for classic and pink side for advanced. You'll choose which type of game you want to play and have all three cards facing the same way.

These cards offer optional bonuses if certain objectives are fulfilled during a successful turn.

As you can see from the requirements for a successful draw, all of these objectives will be tricky to acquire. You'll definitely need to push your luck to achieve any of them!

I found I was so drawn to attempting to achieve these goals that I'd often end up failing my collection! And I never thought of myself as a gambler! But when I did manage to gain one of the bonuses I was elated!

Which Side of the Screen?

Scoring is all about the flowers you've collected, and which side of your screen that they have ended up on.

Flowers kept behind your screen, and secret from the other players, are scored in two groups, Warm and Cool.

At the end of the game, you must decide how to separate any black and white flowers BEFORE you raise your screen and reveal your secret stash to your opponents. You'll then score the warm and cool flowers. The winner of each group will be the player who acquired the most flowers of each type. (Depending on player counts there will either be a 1st, 2nd and 3rd place, or one winner of each group.)

Final scoring is simply adding the victory points achieved from both sides of the screen and the highest points wins!

What I like about the secret element is that you're never 100% sure who is going to win. Although, I must admit that at a smaller player count it's pretty easy to keep track of who's leading. I imagine with more players and more mastery cards being achieved this would be harder to remember. Therefore creating a more thrilling reveal at the end of the game.

The Legend of the Cherry Tree caught my eye because I love interesting tokens and gentle concepts. Though the push your luck elements do get your heart racing, those risks rarely have an impact on other players.  I'm not a fan of 'mean' tactics, mainly because they tend to cause upset in our competitive household. I'd rather enjoy a calmer game where each player works their own thing without trying to destroy their fellow competitor. This game really works for that.

It's pretty and there's a decent amount of game there. It's a fun, family friendly, filler set collection game! It'll test your nerve and your luck, but it's not going to rock your gaming world. But for the price point, I'd say it's definitely worth a punt!

If you're in to push your luck mechanisms and fancy an underwater adventure why not try Deep Sea Adventure, where you'll be risking your oxygen supply in order to gain treasure! If set collection is your thing Coloretto could be a good choice, with its fast set-up and simple rules you'll be collecting chameleons in no time! And if it's the art and theme that really speak to you in The Legend of the Cherry Tree then perhaps the beautiful Geisha filled Hanamikoji is the game for you!