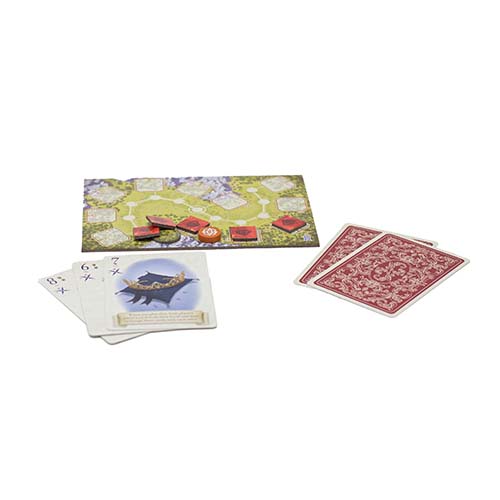 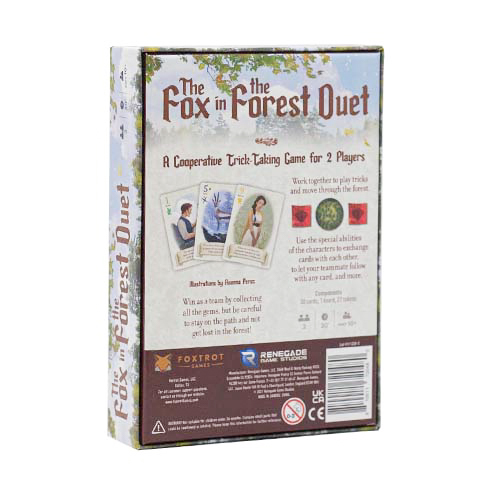 The Fox in the Forest Duet

you could earn 1149 victory points

you could earn 1149 victory points

In the two-player, co-operative trick-taking game The Fox in the Forest Duet, players team up, helping each other move through the forest. Collect all the gems before the end of three rounds of play, and you win! To set up the game, place gem tokens on the designated spaces of the game board and the team tracker token in the center of the movement path. At the start of each round, s…
Read More
Category Board Games Tags Best Sellers, Renegade Game Studios SKU ZBG-RGS2048 Availability 3+ in stock
Share
Share this
87%

In the two-player, co-operative trick-taking game The Fox in the Forest Duet, players team up, helping each other move through the forest. Collect all the gems before the end of three rounds of play, and you win!

To set up the game, place gem tokens on the designated spaces of the game board and the team tracker token in the center of the movement path. At the start of each round, shuffle the deck of thirty cards  which contains three suits, each numbered 1-10  and deal each player a hand of eleven cards. Reveal one card as the "decree" card to determine the trump suit. For each trick, one player leads a card, and the other must follow suit, if possible. The winner of the trick moves the team tracker toward them a number of spaces equal to the number of fox footprints on the cards played. If the tracker lands on a space next to a gem, the players collect one gem. If the tracker would move off the end of the path, return the tracker to the center of the path, then add a forest token to one end of the path, reducing the number of spaces upon which you can move (with you sliding gems next to this covered space next to the new end of the path).

The odd-numbered character cards have special abilities when played, allowing the trick winner to move the tracker in the direction of their choice or to ignore the footprints on one of the played cards so that you can land on just the right spot. One character allows players to exchange one card with each other, while another allows a player to change the decree card.
At the end of a round, you add five gems to designated spaces, add a forest space to shorten the path, then receive a new hand of eleven cards from a freshly shuffled deck. Collect all 22 gem tokens, and you win. Run out of time or head off the end of the path with no forest spaces in reserve, then you can just keep running in defeat or shuffle the cards and start the game anew.

True two-player games, rather than games that have a two-player mode, can feel a little hard to come by. Ones that have beautiful artwork, come in a small box, are cooperative, and play really well? Even harder. Which makes Fox in the Forest Duet by Foxtrot and Renegade Games a worthy addition to your selection.

In essence, the game is incredibly simple: win tricks together to collect gemstones. Collect all the gemstones to beat the game. This might make the whole thing slightly boring. However, Foxtrot and Renegade came up with some clever tweaks to make it a fun and challenging little card game.

Firstly, there's the beauty and simplicity of the game. You'll get a set of cards in three beautifully rendered suits (doves, roses and stars). You'll also get gem tokens, forest tokens, a forest board and your team tracker - along with two handy reference cards. Dealing out eleven cards each, you'll play three rounds with a trump suit decided randomly each time. When you win a trick, the team marker moves across the board towards the winner depending on what cards have been played.

Certain cards in each suit have extra abilities. Examples include ignoring some of the movement or allowing a player to not follow suit. And why would you need those kinds of special abilities? Because Fox in the Forest Duet doesn't let you communicate about what you have in your hand. And whilst some other cooperative trick-taking games, like The Crew, give you limited communication, this one doesn't. Which makes the game a fantastic balance between playing cautiously, strategically and recklessly - or more accurately you'll occasionally need to gamble in order to win. In fact, the ban on discussing the game only adds to the tension. It also forces you to talk about other things and that shouldn't be a bad thing.

What Makes It More Interesting?

Did I say simplicity? Yes and no. You CAN play Fox In The Forest Duet casually; losing doesn't feel like you've failed and we didn't get angry when the other player took a risk or things didn't pan out. But if you want more of a challenge? You can flip the game board to play a harder difficulty setting, or think much harder to try and be strategic. Additionally, at the end of each round, you'll need to add more gems and make the forest path smaller. That last part also happens if you miscalculate and your post-trick movement would take you past the edge of the forest. This has the two-fold result that it makes your job easier and harder at the same time.

You might think that this all sounds like you're almost guaranteed a win but the truth is that we lost as much as we won. If you don't collect all of the gems by the end of the third round, or if you run out of forest tokens when your move would take you past the end of the game board then you'll lose.

Even losing a trick can lead you towards losing the game, and without being able to communicate that can easily happen. But this is one of the things that I like most about Fox in the Forest Duet - you can get the style of end game tension something like Pandemic dishes up, but in a bite-sized chunk that can be played in thirty minutes with a lot less set-up. And if you want to play again straight after you win (or lose) you'll still have plenty of time. It's quick play-time, small size and simple rules mean that you can easily take it with you, play it in a small space and fit it in when you can't manage a larger or more involved game.

Foxtrot and Renegade have done an incredible job packaging this up in a way that should appeal to people who like card games, an original fairy-tale story, or a game that's beautifully designed. Not only that but I swing between desperately wanting to win and not minding losing when I play games. Since losing a trick, accidentally missing a gem or wandering past the edge of the forest path is so easy to do you could find this frustrating, and yet often it's the result of a bold attempt to win when you're not quite sure what your opponent-teammate has in their hand; I like that.

I'm a big fan of co-op games and Fox in the Forest Duet pushed my buttons. It absolutely won't replace something bigger and more involved (we're looking at you Betrayal at House on the Hill) but if you like the idea of a shorter, simpler version then you should definitely invest in this. It's cheap, it's fun and it's challenging yet not overly complicated - which is exactly what it's meant to be. It would also stand up well with younger players.

This brings me to the final obstacle in our house: The R-test. Or: whether or not my wife will play. (Note to readers here: there are a few games that she'll play or tolerate but very, very, very few that she will actually enjoy. I'm always on the lookout for something that might tempt her towards playing more. Should I ever get her to try something ridiculously complicated like Dune then I'll have achieved the board game equivalent of locating the lost jewels of Atlantis in your grandmother's attic). So what happened with this one?

This time I didn't even ask if she wanted to play and opted instead simply to plonk it down in front of her once we'd finished eating. Perhaps the simplicity of the pieces won her over but she didn't roll her eyes or groan in the sort of resigned way a patient who needs their annual bowel check might. A solid start.

We actually won together in the second round and she picked it up pretty much straight away. Based on a complex set of algorithms that factor in facial expressions, amount of concentration, number of times I have to remind her it's her turn, and the multiples of how often she complains that she's "no good at games/can't remember the rules/it's boring/is it finished yet" I can safely say that this one will get played again. It might even be asked for.