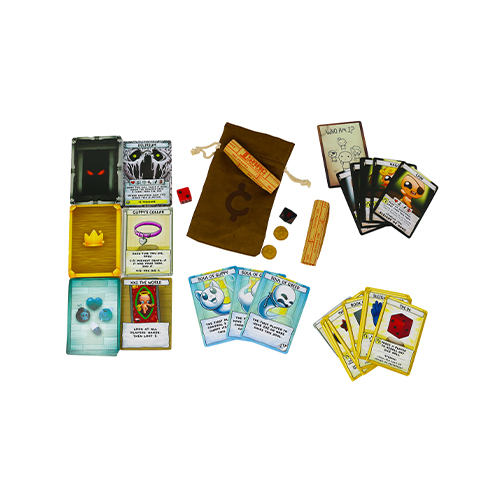 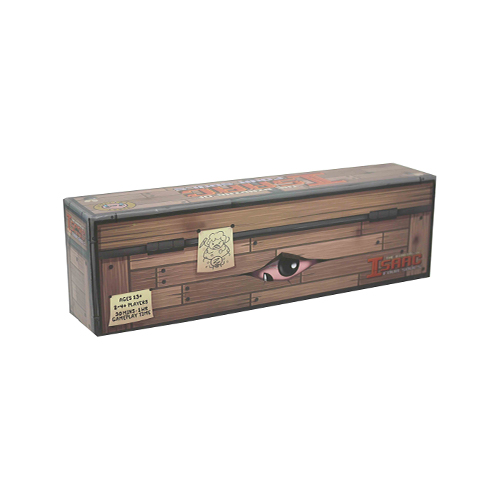 The Binding of Isaac: Four Souls

Pay in 3 interest-free payments on eligible purchases. Learn more
Success! We will let you know when this product is available again.
Your email address has been unsubscribed!
Your email address has been unsubscribed!
Notify me when this product is available to purchase!
This email address is already subscribed to this product!
The official Binding of Isaac multiplayer card game, about sacrifice, betrayal and hoarding. 2-4 players take turns playing loot cards and using items to kill monsters that yield more items, loot, and sometimes souls. The first player to end their turn with 4 souls is the winner. Cooperation, barter, and betrayal is encouraged.
Read More
Category Board Games Tags Best Sellers, Studio 71 Games, Zatu Gold Award SKU ZBG-S71BOI01 Availability Out of stock
Share
Share this
80%

The official Binding of Isaac multiplayer card game, about sacrifice, betrayal and hoarding. 2-4 players take turns playing loot cards and using items to kill monsters that yield more items, loot, and sometimes souls. The first player to end their turn with 4 souls is the winner. Cooperation, barter, and betrayal is encouraged.

The Binding of Isaac: Four Souls is a table top card game with a very clear goal – collect four “souls” before anyone else at the table to win. Unlike many licensed games (such as the previously mentioned spin offs of Clue and Monopoly) where a pre-existing game/game mechanic is repackaged with images and names of beloved media, Four Souls was built from the ground up as a stand-alone game.

This means that as a player you don’t need to know anything about the original video game to understand what’s going on – just like me, who picks up the controller then dies horribly within the first few minutes. Although it should be noted that if you are familiar with the indie classic, you will get a kick out of recognising aspects of the video game and how they have been reinterpreted – and then lording this knowledge over your competitors despite the fact it will give you little to no advantage whatsoever.

Like most card-based table-top games there is little set-up required. The game has a suggested layout for your three decks – split into Monster, Loot and Treasure, respectively – as well as each player’s individual space. This set-up can be helped with the use of one of the official Four Souls player mats – these aren’t necessary for play, but they make your table look very cool. The most time-consuming part of the setup is shuffling the 300+ cards which are beautifully illustrated – assuming you're into a more macabre style of art or the creator’s self-confessed “cute-ugly” style. (It is worth warning that, much like the video game, Four Souls has a graphic tone and many of the images depict blood, gore and even dead animals – hence the 13+ age rating.)

Once each player has picked their unique character, collected their starting item, has been doled out their first hand of Loot cards and gathered their coins – it is time to play.

Each turn consists of taking from the Loot deck, playing items from your hand, buying Treasure, fighting Monsters or activating cards already in your arsenal (including your player card, which allows you to play an extra Loot card from your hand). You can do these in any order and items are recharged at the start of your next turn. This is where the strategy and some complicated mechanics come into play.

You not only need to make sure you are using items that will help towards your goal of collecting a soul, but you also need to make sure you use them in the best possible order to get the most out of your turn. Like with most table top card games, Four Souls is best learnt by playing – as it would be impossible to anticipate what you need to do when literally anything could happen at any moment. Luckily, the cards do a great job of explaining their purposes, as bizarre as some may seem.

Arguably the most important part of Four Souls is fighting Monsters, which come in two forms. The basic variety will give you Loot or money when defeated, but bosses will give bigger rewards and more importantly, the souls needed to win the game. Although you can find souls in other ways, fighting is the most consistent. At any point during your turn you can choose to attack one active Monster on the board – this is based on dice rolling and any additional help that your active cards may give (like extra attacking power or adding numbers to your dice rolls). But ultimately, it is still down to the luck of your rolls, and if you miss an attack you take damage – and when you take too much damage, you die.

Not to worry, though. Death is nothing more than an inconvenience. Death ends your turn and penalties are taken reducing your Loot, items and coins (so do try to avoid death if you can). At the end of your turn all players and monsters are healed and it is almost as if it never happened.

It is not just your own journey for the souls you have to worry about. There are others at the table who may get in your way while trying to achieve your goals. The instruction booklet in Four Souls states that “Cooperation, barter, and betrayal is strongly encouraged”. Many items in the game can be used on your fellow dungeon dwellers – both to help or hinder them. This is especially true the more players are at the table – however in a two-player game you are probably going to find more success focusing on what you are doing rather than wasting actions trying to stop other players.

The Binding Isaac: Four Souls is clearly a game made with a lot of love and intention, from the high-quality cards and adorable coin purse with cute little plastic tokens. If you're expecting an easy-going card game you have come to the wrong place, Four Souls is a complex game with a lot to try and get your head around initially but good times are ahead once you start playing. Even before adding the expansion pack the replayability of this game is insane! Having played it quite a few times in the last year or so, I still seem to come across new cards while playing all the time. Although player interaction varies depending on the number of players, if you want a fast-paced, item-stacking, treasure-hauling, monster-slaying strategy card game this is definitely worth looking into along with the Four Souls+ expansion pack.