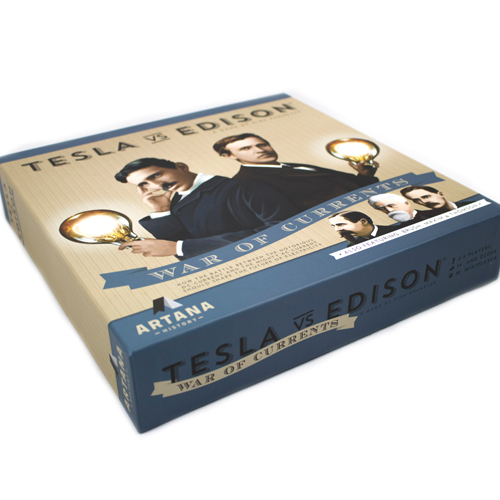 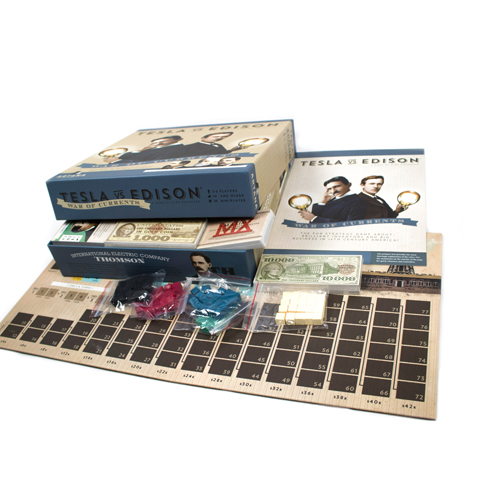 Pay in 3 interest-free payments on eligible purchases. Learn more
Success! We will let you know when this product is available again.
Your email address has been unsubscribed!
Your email address has been unsubscribed!
Notify me when this product is available to purchase!
This email address is already subscribed to this product!
Tesla vs. Edison lovingly presents the War of Currents theme. In running your electric company you are both a starry-eyed inventor and a ruthless businessman. You feel pride in bringing electricity to the masses and developing miraculous new technologies, even as you file patents, engage in a propaganda war, and roll up your sleeves in the stock market. Balancing both sides of an in…
Read More
Category Board Games Tags Accenuate Games Limited, Dirk Knemeyer, JR Honeycutt SKU ZBG-AGL1001 Availability Out of stock
Share
Share this
86%

Tesla vs. Edison lovingly presents the War of Currents theme. In running your electric company you are both a starry-eyed inventor and a ruthless businessman. You feel pride in bringing electricity to the masses and developing miraculous new technologies, even as you file patents, engage in a propaganda war, and roll up your sleeves in the stock market. Balancing both sides of an inventor?s enterprise is required to achieve your victory.

Being a bit of a tech nerd, I was overjoyed to first discover Dirk Knemeyer’s Tesla Vs Edison. Released on Kickstarter back in 2015, Knemeyer’s game saw players taking part in the historic ‘war of currents’, led by luminaries Nikola Tesla and Thomas Edison.

Dubbing himself a social futurist and games designer, Knemeyer invests hundreds of hours of research into his historical games. Lets see if Tesla Vs Edison reflects this research, whilst still offering an electrifying game experience.

So, What’s it About?

This economic stock market game sees two to five players taking on the roles of wealthy investors. Players will team up with one of five historic inventors, with hopes of leading their company to economic victory and fame.

The electric industry’s famed poster boys are joined by three other inventors. Each is depicted by their own card, company stock certificates, and coloured cubes. Will you opt for geek icon Nikola Tesla or the lesser known Charles Francis Brush, innovator in arc lighting and early AC technology?

Throughout the game, luminaries will be employed to advance technologies, adjust the stock markets, and construct projects across the United States.

Matching the era’s tumultuous history, players will also engage in ruthless propaganda, promoting their own power systems and patents whilst condemning their rivals.  After six rounds, the player whose company holds the most valuable portfolio of stock certificates wins the game!

Can You Illuminate Us On How it Plays?

Tesla Vs Edison plays over six rounds, divided into three phases. Each phase will introduce new luminaries to hire and more propaganda to spread. Once each player has employed one new luminary, the round begins starting with company highest on the fame track.

By exhausting their luminaries, players will take turns performing one of four actions. Each luminary also has four stats determining their proficiency in inventing, manufacturing, finances, and propaganda.

What Can I Do On My Turn?

Exhausting one or more luminaries with high invention and manufacturing stats will help players advance their technologies. Every movement on the tech track broadens the choice of projects available to build across America. If your luminary also excels in finance, players may additionally acquire the patent associated with their new position on the technology track.

To claim projects, a player’s company must pay the depicted cost and also meet certain requirements in both bulb, and either AC or DC technologies. A level two project in Buffalo for example would cost $8k and require a player cube on at least level two bulb technology and their chosen power system. Furthermore, if another player held the relevant level two patent, the player constructing the project in Buffalo would need to pay extra to that company.

Exhausting a luminary with the propaganda stat will allow that player to advance in the company fame track or adjust the popularity of the competing AC/DC power systems. The order of the company fame track dictates the turn order as well as awarding the leading company a rise in stock prices at the end of each round. Similarly, stock prices will increase for the player holding the most advanced patent for that round’s favoured power system.

Whether they possess the propaganda stat or not, exhausted luminaries allow the controlling player to choose one of the face-up propaganda cards. These cards adjust the depicted fame tracks and grant the player a lump sum of money.

Arguably the most important action available to players is visiting the stock market. Here players will buy and/or sell any available stock certificates from any company. Using a luminary with a finance stat will grant discounts or bonuses for this action.

Buying a certificate will increase that stock’s value, moving the player cube up the track a number of spaces equal to the game phase. Selling a certificate, on the other hand, results in the relevant player cube shifting one space to the left on the stock market track.

With each passing phase, your luminaries and their ways of affecting the stock market will become more powerful. Mechanically, this sense of momentum as time passes works through the granting of discounts and increasing certain stock values equal to the game phase number.

Whilst the unique historic theme peaked my interest, I can’t deny that I’m also a sucker for clean graphic design. Building upon his previous collaborations with artist Heiko Gunther including The New Science and The Road to Enlightenment, Knemeyer seems to have perfected an appealing, minimalist style. This simple aesthetic has been gaining traction recently with games such as Time Stories and Fog of Love. But, back in 2015, Tesla Vs Edison really stood out.

Heiko’s clean lines and soft pastel colours are supported by Jessica Riola’s superb illustration work, depicting the game's numerous moustachioed men. Together, the game’s art exudes class and a workmanlike efficiency. This both brings out the theme and helps players from becoming overwhelmed by excessive text or iconography.

The crisp, clean aesthetic extends over to the game’s components too. It may be an odd observation, but the coloured player markers are probably the most perfectly cuboid bits of wood I’ve seen! Also, the paper money used in Tesla Vs Edison is a far cry from the flimsy notes of Monopoly. Printed on sturdy card-stock, these notes feel great in your greedy luminary hands. Both games may share a fondness for cash grabbing capitalism, both physically and thematically, but Tesla Vs Edison swiftly reminds us how far game design has come.

Zap That Brain into Action!

Due to its thoroughly researched theme, the game treats players with respect and intelligence, urging us to engage with an important and surprisingly vicious area of history. I must admit that a single game of Tesla Vs Edison inspired me to learn more about the development of electrical sciences more than school ever did!

Each card comes with its own piece of condensed history, begging to be further explored by the players. Revelations on animal cruelty and capital punishment are rife within this tabletop rendition of the war of currents, exposing the power and bitterness of 19th century business propaganda. It is a truly engaging and educational experience for those with an interest in historical games.

But, history lessons aside, it helps that the game is also fun! The ever-changing state of the stock market is a joy to behold. The historic rivalry also translates well through the backstabbing actions of the players. Tactical depth comes from deciding who to hire, and when and how to use them, alongside discovering the best place to construct your first project for the route-building section of the game.

Four available actions in a medium-weight game isn’t a huge amount, but this refinement avoids players losing focus in a sea of options, instead forcing players to carefully plan. This makes every decision and every tiny push of a cube feel important, without making the game feel like a themeless spreadsheet.

Whilst it’s great that Knemeyer has created a stock market game that functions well at two players, play-throughs at higher player counts will display greater moments of interaction. The consequences of multiple players’ actions create interesting and dynamic changes to the game state, elevating the game above the crucially important manipulation of the stock market which defines the two player experience.

That being said, the stock market area of the game will become the dominant focus of most play-throughs, regardless of player count. Whilst it works well, it arguably takes focus away from Tesla Vs Edison’s other great mechanisms. Investing so heavily in one area of the game gradually begins to diminish the game’s theme. Whilst money undoubtedly played a huge part in the war of currents, it is the combination of several vicious battles in propaganda, technical superiority, and land ownership that makes the topic so enduring.

Final Thoughts on Tesla Vs Edison

Equally worthy of a place on your shelf as it is in the classroom, Knemeyer’s lovingly researched game offers a shocking amount of fun while you learn! Despite Tesla Vs Edison’s over-reliance on the stock market, the game still retains enough unique, thought-provoking, and clever qualities to qualify as a title worth checking out.

If you enjoy historical themed games and heated player interaction, then this tense battle through the war of currents should spark your interest. Similarly, if you’re a fan of economic games like Power Grid or Lords of Vegas, but are looking for something with a bit more theme, Tesla Vs Edison certainly fits the bill.

You’ve Sparked My Interest. But What if I Want More?

In 2016 Dirk Knemeyer launched Tesla Vs. Edison: Powering Up! Whilst I’ve not yet tried the expansion, it apparently addresses the base game’s dominant strategy of working the stock market. Crucially, it also introduces an alternative victory point scoring method. The stock market action has been limited and moved to the book-keeping phase. This should have the effect of speeding up gameplay and widening up player’s options to score points elsewhere.

And if that wasn't enough, 2017 saw the release of the exclusively two-player game Tesla Vs Edison: Duel! Expect to see reviews as soon as we get our hands on them!