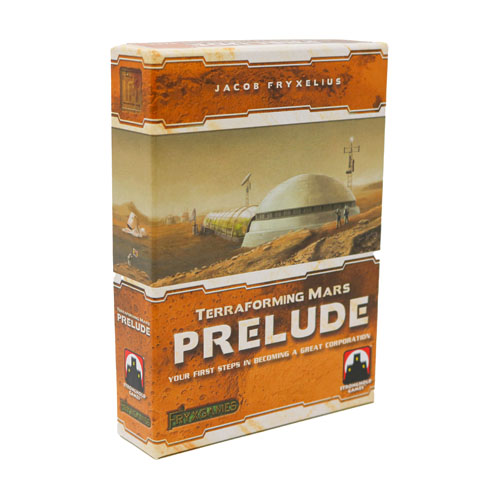 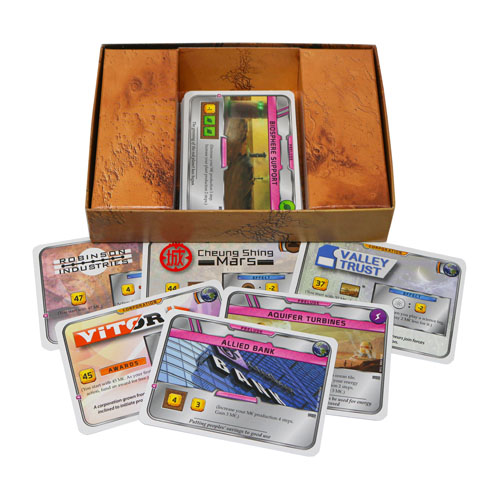 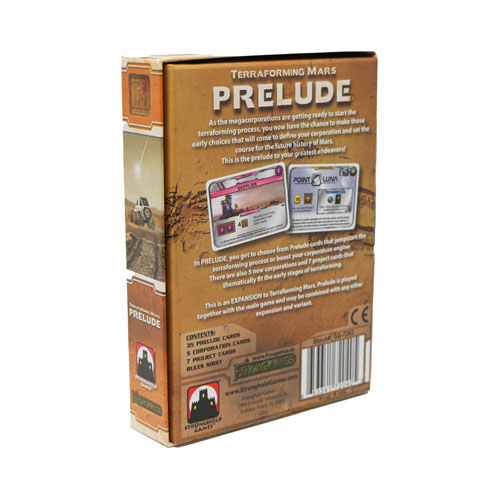 In Terraforming Mars: Prelude, players can now start to make choices much earlier than before, choices that will ultimately define their corporation and will affect the outcome of their terraforming progress! This really is the prelude to your greatest terraforming endeavours!

This small expansion focuses on the early stages of the colonisation of Mars, telling the story of the corporations and giving players the background of these massive companies. The expansion is simple to implement into the game. Players, when selecting a corporation, also draw four prelude cards. On these cards are various effects that boost the corporation that the player selects. You will then choose two of these prelude cards to boost your corporation.

This expansions opens up a massive range of possibilities, allowing players to open up with a fantastic boost combination, giving them an advantage early game, while also allowing players to become more asymmetrical. It also adds five new corporations for players to use along with seven project cards that add to the theme of the early stages of your quest to terraform the red planet!

Terraforming Mars is quite possibly my favourite game but for some the game can go on for a bit too long. The game’s third expansion, Prelude, was one of the most anticipated releases of Gen Con 2018 and essentially sets out to give corporations a pre-game boost with the intention of kickstarting their terraforming engines

After the new boards of Hellas & Elysium (read my review of this expansion here) and the terraforming of Venus in Venus Next, this small box contains only a mere 48 cards but adds a lot to the way the game is played, with seven new projects, five new corporations, one summary card for the new solo mode variant and 35 Prelude cards.

For most, the real Terraforming Mars experience comes when playing with the Corporate Era expansion (included in the base game box). The ‘base game’, with a third less project cards and where everyone starts with one production of every resource falls a little flat in comparison to Corporate Era, where players have to work for all of their resources. Granted, the base game gives everyone a little kickstart to their engines, but it feels manufactured and doesn’t feel earned.

The Prelude cards give the corporations a pre-game boost which feels less uniform and actually helps start their corporate journey in fun and thematic ways. For example, Great Aquifer allows you to place two ocean tiles right from the get-go, Biofuels gives you starting plant and energy productions, and two plants, Huge Asteroid increases the temperature by three but at a cost of five megacredits, while Excentric Sponsor lets you play a card from hand for a 25 megacredit discount and includes a picture of Stronghold Games’ President Stephen Buonocore lighting a cigar with a banknote!

Adding Prelude to the game is easy – players are dealt four Prelude cards during set-up alongside the usual two corporations and 10 projects – you will choose two of the four Preludes at the same time as choosing corporations and project cards. After all corporations have been selected and cards paid for, each player plays their pair of picked Prelude cards in player order. They work like green cards, staying in play with their tags visible.

And that’s essentially it! The rest of the game plays out as normal, but the initial boosts to the engines of each corporation will get the game into more interesting territory quicker. Admittedly, choosing the Prelude cards during setup adds a lot to deal with in one go, especially for new players, but it’s worth it for what it brings to the game. 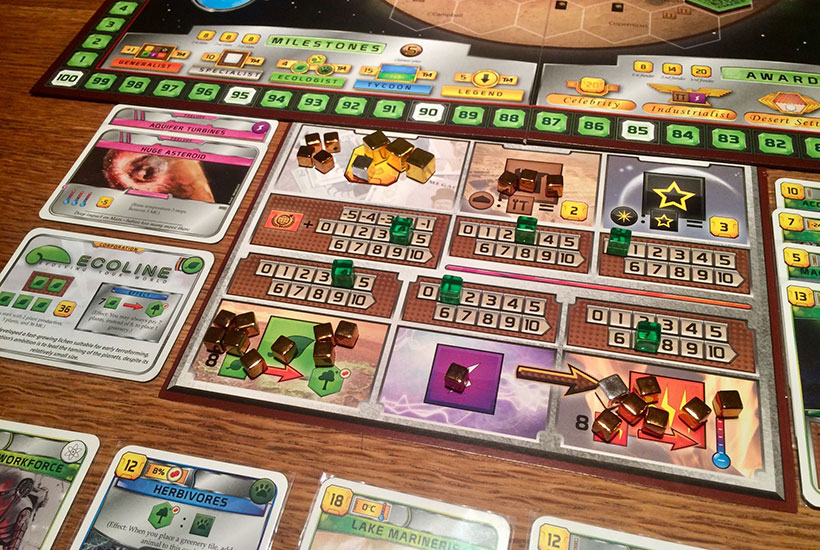 New Kids on the Block

We all love new corporations to increase variability, and Prelude comes with five new corporations. Four of these can be played with the standard game, but as your first action as Valley Trust you pick a Prelude card from a choice of three – there’s nothing stopping you doing this even when playing the base game, but you will need the Prelude cards handy.

Possibly the most interesting new corporation is Robinson Industries, who can use an action to spend four megacredits to increase (one of) their lowest production(s) one step. I haven’t had the honour of being their CEO yet, but I would definitely be doing that action every generation. Point Luna gets a free card from Earth tags, Vitor gets money for VP icons and Cheung Shing Mars pays less for building tags (which I particularly like).

Prelude also comes with seven new project cards to shuffle into your bulging deck – for me, the most notable one is “House Printing” which shows houses being made on the surface of Mars by a giant 3D printer – this game has a giant and well-known range of unofficial and fan-made upgrades and this is no doubt a nod to the thousands of fans of the game who have 3D printed their own Terraforming Mars tiles. 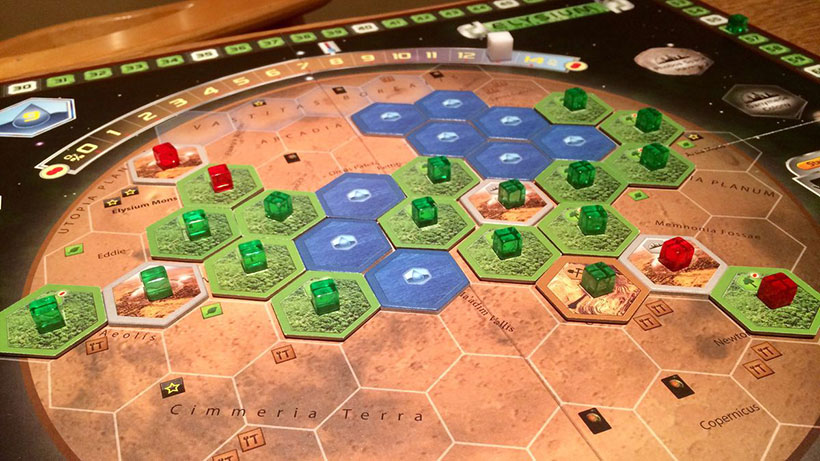 As well as being one of my favourite games to play with friends, Terraforming Mars is also one of the best solo gaming experiences out there – so much so that I wrote a whole review dedicated to the solo mode!

When using the Prelude cards in a solo game, you only have 12 generations to complete terraforming rather than the usual 14. This makes sense, but I have found it to be slightly more challenging overall, because in a normal solo game those final two generations are usually very busy, with my corporation’s engine in full throttle satisfying those final global parameters. The Preludes give your corporation an early boost but I find they often don’t quite make up for those final two generations – but rather than seeing this as a bad thing I welcome the slightly different challenge.

Additionally, Prelude introduces an entirely new solo variant, called TR Solo, where you simply have to reach a terraform rating of 63 in 14 generations, or 12 if using the Prelude cards. You can focus solely on income generation and only increase global parameters if it suits you. TR Solo introduces a new standard project, called Buffer Gas, which costs 16 megacredits to give you one TR. While I really appreciate this variant I think the standard solo mode will be my go-to mode when playing Terraforming Mars solo because I like having the aim of fully terraforming Mars – it’s the name of the game, right?! 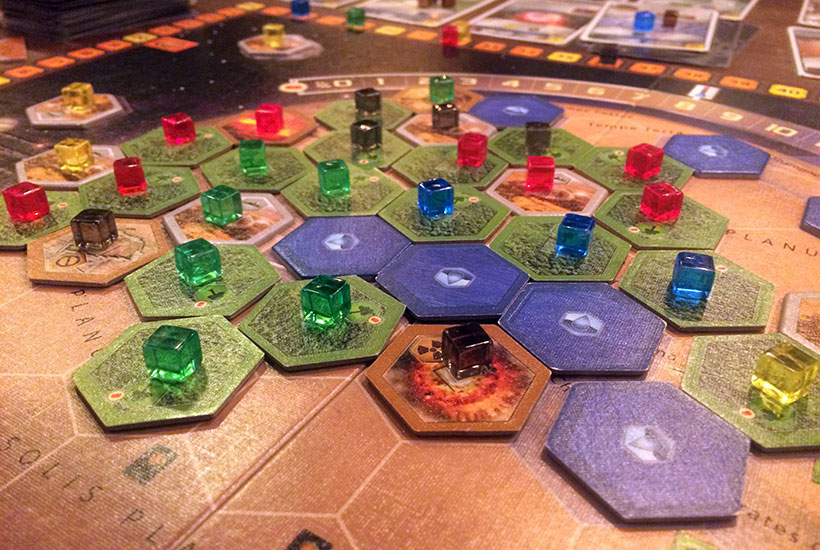 Some people judge expansions by how much physical “stuff” they get, but I think, despite being a small deck of cards, for what Prelude adds to the game I’d almost say this is an essential expansion for the variation it brings in the same way as the Hellas & Elysium boards expansion.

I’m not sure I’d add the Prelude cards to every single game, just as I wouldn’t always use the Hellas or Elysium boards, but I’m pretty sure it will appear in most – and having the variation will keep things fresh. The Prelude cards are a subtle change to the beginning of the game and doesn’t fiddle with the gameplay and mechanics of what is already one of the outstanding games of our time.