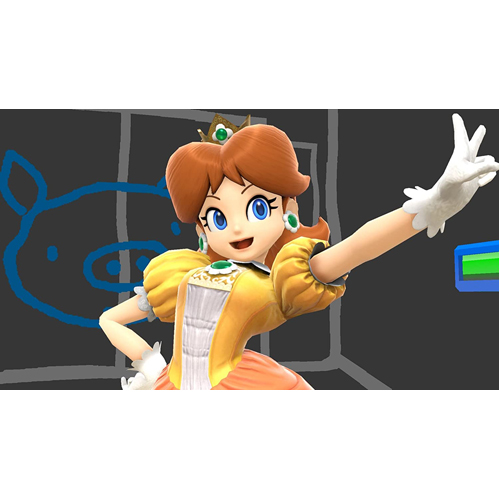 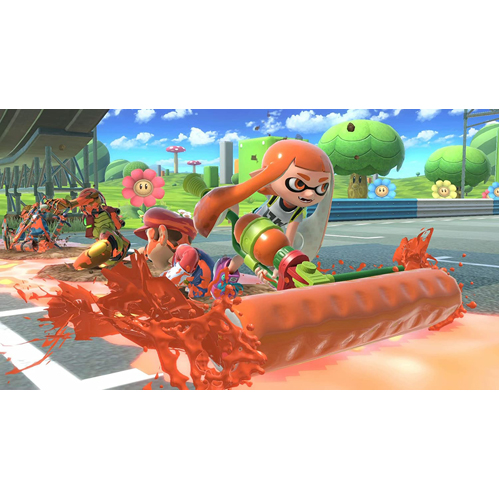 Pay in 3 interest-free payments on eligible purchases. Learn more
Success! We will let you know when this product is available again.
Your email address has been unsubscribed!
Your email address has been unsubscribed!
Notify me when this product is available to purchase!
This email address is already subscribed to this product!
A new game built for Nintendo Switch; Super Smash Bros. Ultimate lets up to eight players square off in action-packed battles that are all about smashing beloved video game characters off the screen. New fighters make their Super Smash Bros. Series debut alongside every Super Smash Bros. Fighter in the series! Elevate your Super Smash Bros. Experience to new heights with faster comb…
Read More
Category Video Games Tags Nintendo, Nintendo Switch, Platformer Video Games, Software, Super Mario, Super Mario Video Games SKU VKM-NINA11.UK.45ST Availability Out of stock
Share
Share this
94%

Super Smash Bros. Ultimate, before anything else, is the definitive gaming crossover. There isn't really any denying that. Whether you're in it for the absolutely massive competitive scene or just see it as a fun party game where Solid Snake can fire a big rocket at Pikachu, there really is something here for anyone who likes fun. This game embodies everything the franchise is famous for wacky crossovers, accessible controls and endless charm. Super Smash Bros. Ultimate is the latest game in this long-running fighting game series. And it is the biggest, and arguably the best overall, in the franchise.

For Fun or For Glory

Smash is different things to different people, but it's nothing if not accessible. Going in as a newcomer, there's no complicated combos or tricks to learn. Smash Bros has always embodied the concept of 'easy to learn, hard to master'. Here, the gameplay is the most polished and enjoyable it's ever been. The simplistic set of controls means you can get stuck in straight away and figure out what you're looking for from Smash. Do you want to become a competitive master or do you just want to spam Ness' fire attack until everyone you're playing with gets annoyed at you?

No matter your playstyle, there's plenty of gameplay options to suit everyone. For hardcore tournament players, you have the option to turn every stage flat to avoid any kind of distraction or stage hazard that could deviate the match from being anything but pure skill. At the same time, there are also plenty of wacky items in the game, most of which are new. These randomly spawning items essentially turn the game into a free-for-all. See who can grab the banana gun first!

I would also be remiss not to mention the iconic Smash Ball. Any fighter who hits this floating, colourful ball enough times will start to glow intensely. Then you can unleash a massive attack that is not only most times deadly but is also unique to each fighter you play as!

But Who to Choose?

You can't talk about Super Smash Bros without talking about the characters. When a character is added to the roster in Smash, it is an event. Speculation runs rife in fan circles. Memes circulate around to people who don't even play the game. There is a palpable excitement to a new Smash Bros character that can't really be matched by anything else in gaming.

Ultimate has the biggest roster in the series, so it goes without saying that the variety at play here is unmatched. When Smash first started out, it was a celebration of all things Nintendo. So naturally, the likes of Mario, Link, Pikachu and Kirby are here. But Smash has since grown beyond that. It has become a celebration of gaming as a whole. There are appearances from a stunning amount of franchises that cover many different genres. It's fairly likely that at least someone in here is going to be from something you've played.

Everyone Really Is Here…

For Ultimate, Nintendo truly aimed to make this the definitive Smash game. in a move no one could've seen coming, they brought back absolutely every fighter from the previous games. All of them. From hype-building heavy hitters like Solid Snake down to obscure old favourites like Young Link. Nintendo packed the Smash Bros roster with every legacy character to make this feel like a culmination of everything the series has been up to this point.

Despite the sheer amount of returning characters, Nintendo still managed to round out the roster with a selection of iconic fan favourite newcomers. Long-awaited Nintendo villain alumni Ridley and King K. Rool both join the battle here. They both come packed with unique movesets and the animated charm inherent to every new Smash character. Plus, the addition of the Castlevania franchise into this game was incredible. The detail in implementing each new addition is a testament to the care Nintendo puts into making sure every franchise is a perfect fit.

And best of all, nearly each individual character embodies a different playstyle. You can be sure you'll never get bored trying to pick your new favourite. Want a lightweight, fast character who can jump in to attack before smoothly disengaging? Try Zelda's alter ego Sheik or Sonic the Hedgehog. Or maybe you'd prefer a hard-hitting heavyweight whose sheer bulk stops them from getting launched? In that case, Nintendo's villain gallery provides plenty of options in the forms of Ganondorf, Ridley or King K. Rool.

The Mii fighters also make a return, allowing you to build your own character and give them preset special moves. They feel a little more redundant in this title, despite the wealth of Mii costumes on offer. This is purely down to the lack of available special moves for each Mii, but they are still a fun extra if you enjoy Nintendo's Miis.

Alongside the unique and colourful cast of characters are the equally important stages. Every franchise represented in Smash gets a smattering of vibrantly detailed stages to duke it out on. The variety on show here dwarfs that of every other Smash game, with over 100 stages to choose from.

For a retro feel, try out the remastered Nintendo 64 stages with charming 64-bit graphics, such as Pokemon's Saffron City. There are also some brand new stages based on Super Mario Odyssey and The Legend of Zelda: Breath of the Wild. These stages perfectly match their home game's art styles, like everything Smash tries its hand at. If you're a fan of any of the games being represented here, you're sure to find tons of little details hiding in the background while you're flinging items around the stage.

I wanted to dedicate an entire section to the music in this game, because wow, does it deserve it. With over 1000 tracks in the game post-DLC, there is an absolute wealth of musical content in this game.

There are not only some classic songs and returning mixes from old games in the playlist. The majority of franchises in the game also got a huge selection of brand new remixes that breathe new life into these already fantastic pieces of music. The music in this game is not just the perfect soundtrack to battle it out, it's brilliant music in its own right. Check out the awesome new remixes for the likes of 'Termina Field' from The Legend of Zelda: Majora's Mask and 'The Map Page / Bonus Level' from Donkey Kong Country to see what I mean.

The ability to customise every single stage, as well as the menu screen, to toggle how much each song plays is a great extra detail. It's features like this that allow you that little extra personalisation so you can really make the game into your own experience.

For those wanting to join the big leagues or even just brush up on their skills against real people from around the world, the online mode is the place to be. With the removal of the 'For Fun' and 'For Glory' sections from the previous games, Super Smash Bros. Ultimate's online now matches you up with players at similar skill levels with you based on a numerical score.

The online is far from perfect, with frequent networking issues and lagging, but it at least has plenty of features. The addition of battle arenas that act as online hubs for you and your friends makes setting up matches quick and easy. As well as this, the ability to gain entry into Elite Smash using individual characters makes for an incredibly addictive activity for the completionists out there. Because once you've got one up the ranks, what's to stop you trying for all of them?

Overall, Smash has always prided itself on its multiplayer potential. Gameplay-wise, this is one of the best multiplayer games on the market. But the frequent issues mean that playing online can sometimes be a chore.

I've covered all things multiplayer, but what about things to do by yourself? Fortunately, Smash Ultimate has a decent amount of single-player content that is some of the best in the series.

The return of Adventure Mode is a very welcome sight, with players tasked with fighting 'spirits'; the souls of various video game characters that have been separated from their bodies. It's a strangely abstract story of light and darkness that even has multiple endings. While it's not as expansive or in-depth as Brawl's Subspace Emissary, it's still great fun as a side to go with your main course of a metric ton of characters. New bosses, referential minigames and fantastic artwork all give this story mode charm all of its own. While it isn't the most fleshed-out story mode in the world, it pays homage to its home series, as well as every franchise that inhabits it really well. Adventure Mode is a good bit of fun that will last you a good 20-30 hours.

Aside from this, there is also the Spirit Board. Here you can fight more disembodied spirits in the form of fighters in the game mimicking their look or home series. Much like Elite Smash, once you start collecting these little pictures, you'll find it really difficult to not attempt to grab all ~1500 of them (I almost have now…). There are also some returning favourites from past games such as Classic Mode and a host of other mini-games to try your hand at. A notable change for this game is the fact that Classic Mode now has unique routes for each individual character, making for some great references and nods to each character's background!

Overall, it is bewildering the amount of content you can find in Super Smash Bros. Ultimate. As a celebration of all things gaming, Smash is always fun to play, especially now with each DLC character bringing the final fighter total to a whopping 89. In many ways, Ultimate is the best way to describe this title. It's difficult to see how Nintendo is going to top this going forward. But for now, I cannot recommend this enough as one of the best fighting and party games you will ever play.