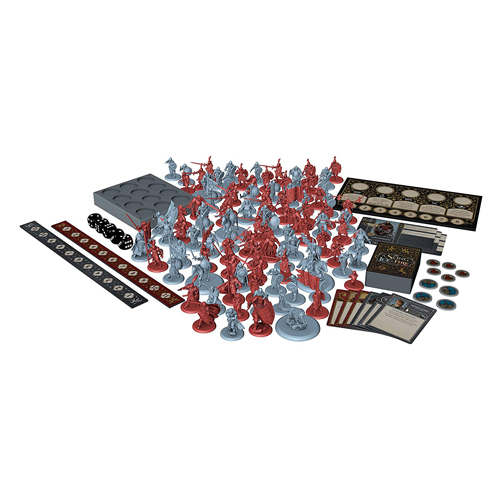 A Song of Ice and Fire: Stark vs Lannister Starter Set Core Box

you could earn 11345 victory points

you could earn 11345 victory points

A Song of Ice & Fire: Tabletop Miniatures Game lets players take control of their favorite Houses from the novels — represented by trays of high-quality, pre-assembled miniatures — and lead them into battle against their opponents. Players can recreate their favorite moments from the series or create their own stories. What if the Red Wedding never happened, and Robb Stark a…
Read More
Category Miniatures Tags A Song of Ice and Fire Miniatures Game, CoolMiniOrNot, Game of Thrones, Zatu Platinum Award SKU ZBG-CMNSIF001 Availability Restock Expected
Share
Share this
90%

A Song of Ice & Fire: Tabletop Miniatures Game lets players take control of their favorite Houses from the novels  represented by trays of high-quality, pre-assembled miniatures  and lead them into battle against their opponents. Players can recreate their favorite moments from the series or create their own stories. What if the Red Wedding never happened, and Robb Stark assaulted King's Landing? Now fans can find out!

Battles can range from large-scale wars with hundreds of miniatures to simple skirmishes between a few units without complicating the elegantly designed rules. The game features several unique systems, including alternating activations that keep the players engaged; a Rank System that changes a unit's capabilities as the battle rages on; a Tactics System that provides strategic powers fueled by a finite resource each round; and, most importantly, the iconic Heroes, such as Robb Stark and Jaime Lannister, that can change the course of war both on and off the battlefield.

The Stark vs Lannister Starter Set has everything needed for two players to fight epic battles. Containing forces for both House Stark and House Lannister, players build their armies, select leaders, construct their tactics deck, and engage in one of five different game modes.

ASoIaF is as the name suggests a miniatures wargame set within the world of George RR Martin's A Song of Ice and Fire but more importantly, it just might be the best wargame to come out in the last decade. Players can pick from numerous factions such as the Starks, Baratheon's and Lannister's as well as having access to neutral mercenary troops which makes up some of the smaller factions such as the Boltons and the Bloody Mummers. This is A Song Of Ice And Fire: Stark Vs Lannister Core Box.

Almost all the major players are present or have been announced as future factions such as the Martells and the game is set right at the death of Robert Baratheon but spans through all the current books in terms of characters and factions.

Mechanically you build an army using an agreed point amount. You pick a faction and a Commander then choose troops who will appear as regiments on the battlefield including infantry, cavalry, giants, and even dragons. Beyond vanilla regiments, you can augment them with attachments which give them powerful bonuses. These range from generic captains to named characters who may only be taken once and can lead to some very vicious combinations. But soldiers are not the only thing that wins battles.

It is after all Game of Thrones and there is a heavy emphasis on the politics that surround the battle. This is mechanically represented by the Tactics board. A sideboard to the main battle with five slots that when claimed give a bonus such as healing a regiment or forcing an enemy unit to roll a panic test. To activate these, you need to bring NCUs (Non-combat units). These are the characters like LittleFinger and Cersei who are manipulating the world around the battle to affect it.

These NCUs also count towards your point limit and cost about the same amount as a standard infantry unit which attests to how powerful the tactics board can be. Do you take another regiment of Baratheon Wardens or the NCU Red Witch Melisandre who will wreak havoc on the enemy lines? It is often an answer that is too circumstantial to have a correct choice.

Beyond The Army Construction

Much of the complexity and strategic choice comes from the cards and unit stats themselves. Almost every unit has some unique attribute or role it plays on the battlefield and that can be further enhanced via the attachments or the playing of tactics cards. Separate from the tactic board which is its own minigame of claiming and depriving the opponent each player also has a hand of context specific cards which can be played when the criteria for them have been met.

For example, a tactics card may trigger when you attack an enemy or when one of your own units is destroyed. They are powerful in their own right and a combination of a unit being played into its strengths and a well-timed tactic card can sometimes be enough to completely wipe an opposing unit from the board and cinch the game.

Units themselves have stat cards detailing their combat effectiveness, movement, armour and other special rules. This will be familiar to those who have played a wargame before but as mentioned previously the core rules are quick to learn and enable the greater tactical game around them.

It is also worth knowing that the game is still supported and receives updates to keep it balanced and competitive. The companion app has fully up to date stats, rules and even army saving features so you can experiment with lists on the go. This does mean that most of the cards you get with the boxes of miniatures are out of date on arrival but that seems to be the payoff for keeping a game fully updated and current. It does however mean some printing and updating components before games which can be a hassle.

The art is great, the models are designed by DarkSword Miniatures inc and George RR Martin signed off on them. This is probably the purest gaming form of Westeros we will get. The sculpts are crisp and well produced to the point where they are probably the nicest boardgame plastic models available and there is a grimness in the aesthetic that makes them ideal for using bare or painted depending on your preference. Each faction also has its own aesthetics that come through to make really characterful models and emphasize the speciality of the army.

The Lannister's have good equipment with plumes and sashes, the Starks are more basic but battle hardened, the Targaryen's are almost entirely cavalry driven while the Free Folk (Wildlings) are a horde with masses of lightly armed and armoured troops. Then there are the centrepiece models such as the dragons, the Kingsguard, the Bolten Flayed knights and the Mountain that Rides. The production is all top quality and feels like a proper crunchy wargame with soldiers fighting over the battlefield.

As mentioned prior the game is still being updated. This means that units can entirely change in their roles and stats which although done for the sake of balance could be annoying if a favourite unit suddenly gets revamped and you need to remake your list to accommodate it. There is also some issue with stock availability. Some units are rarely ever in stock such as the Champions for the Stag and new factions are often sold out at release to only be restocked a number of months later.

This issue seems to be particularly prevalent in the UK. Also particularly strange is the release schedule and the lack of advertisement for new releases likely tied into the stock issues. Sometimes units are released without any warning and others are previewed for months before appearing at retail. It is frustrating that Cmon is not able to deliver clearer news about upcoming releases and put them on the official channels. There is also an issue of cost.

Wargames are by their nature expensive and this game is no exception. Regiments will set you back between twenty and thirty gpb on average and depending on how popular the unit is you may run into supply issues. The starter sets you to need to play a faction are also on par with a large, new boardgame and although they include enough to make a force you will definitely want to pick up units beyond them and at that point, you have invested a fair amount of money before potentially playing your first game.

ASoIaF Tabletop Miniatures Game is in my opinion the best wargame available at the moment. The armies have character, you can build your own force based on your favourite faction and there is a lot of support for it with an active tournament scene. Games clock in at about 2 hours and it fills the itch for a large tabletop game with regiments marching across it to secure objectives and rout their foes.

Mechanically it is sound and offers a gigantic amount of strategic and tactical choice through army building and on the field play as you try and line up your tactics card, deprive the enemy of the tactic board space they need, and focus your cavalry on the exposed enemy flank. It is a game that does a fantastic job at drawing you into the horrible world of Westeros with its heroes and villains and is absolutely a must buy for fans of Game of Thrones.

But if you do not like the theme, it is not ostracizing as it is still close enough to the generic fantasy that you can enjoy it as just a medieval wargame. You just might not get the same level of investment seeing Stannis Baratheon leading his KingsMen against the Wildlings or getting Ned Stark to lead his troops to victory over the Lannister's.