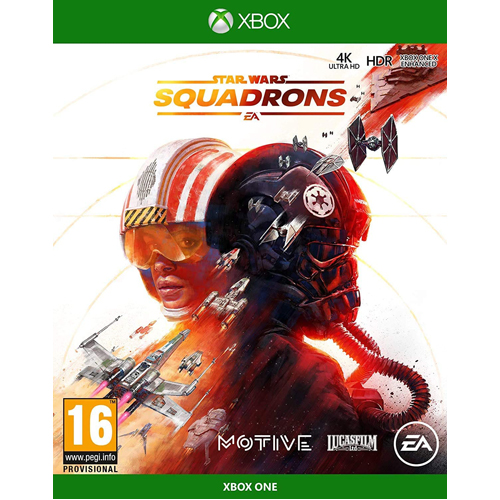 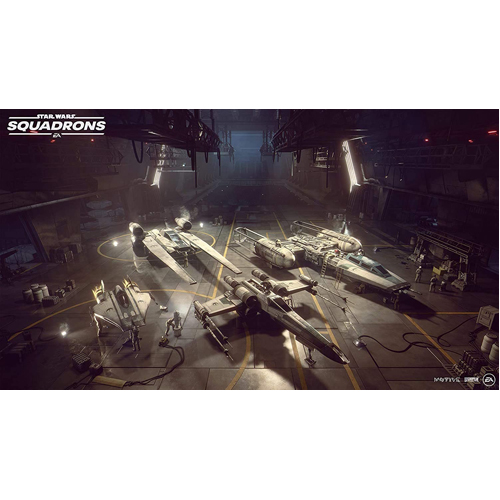 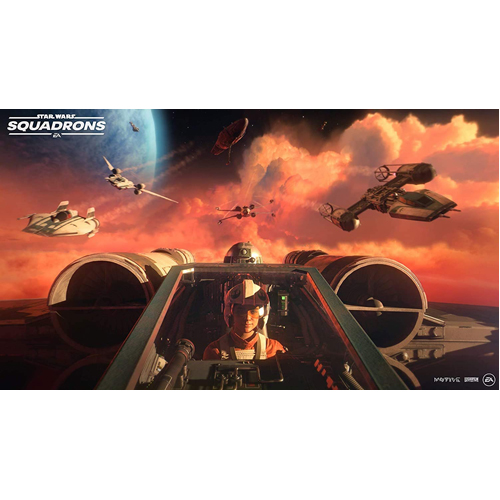 you could earn 1539 victory points

you could earn 1539 victory points

Master the art of starfighter combat in the authentic piloting experience Star Wars : Squadrons. Buckle up and feel the adrenaline of first-person multiplayer space dogfights alongside your squadron. Pilots who enlist will step into the cockpits of starfighters from both the New Republic and Imperial fleets and fight in strategic 5 vs. 5 space battles. Modify your starfighter and ad…
Read More
Category Video Games Tags Action Video Games, Best Sellers, EA, Software, Star Wars Squadrons, Star Wars Video Games, Value For Money, Xbox One SKU VCS-M1RESEELE12346 Availability 3+ in stock
Share
Share this
94%

Master the art of starfighter combat in the authentic piloting experience Star Wars : Squadrons. Buckle up and feel the adrenaline of first-person multiplayer space dogfights alongside your squadron. Pilots who enlist will step into the cockpits of starfighters from both the New Republic and Imperial fleets and fight in strategic 5 vs. 5 space battles. Modify your starfighter and adjust the composition of your squadron to suit varying playstyles and crush the opposition. Pilots will triumph as a team and complete tactical objectives across known and never-before-seen battlefields, including the gas giant of Yavin Prime and the shattered moon of Galitan. Take control of starfighters such as the X-wing and TIE fighter. Customize loadouts and cosmetics, divert power between weapons, shields, and engines, while immersing yourself in the cockpit. In addition, players will have the option to play the entirety of the game in virtual reality on PSVR and PC! Learn what it means to be a pilot in a thrilling Star Wars single-player story set after the events of Return of the Jedi. Seen from alternating perspectives between two factions, iconic and emerging leaders on both sides are battling for the galaxy. The New Republic fights for freedom. The Empire demands order. We need you to join the galaxy’s finest.

Can Star Wars Squadrons by Motive Studios rekindle the good old days of X-Wing vs TIE Fighter or should it have just given up and gone to Tosche Station for Power Converters?

Star Wars Squadrons by Motive Studios is a game of two halves. There’s the single-player campaign, which sees you switching sides throughout. You’ll play as the Rebels, now called the New Republic. And as the Empire, now fractured without their beloved Emperor, who is dead. Completely dead. Never coming back dead. Because that would not only be cheap, but would undo Darth Vader’s story arc of redemption & fulfilling his destiny of bringing balance to the force... And then there’s multiplayer, which comes in two flavours - Dogfights and Fleet Battles. The latter has ranked and unranked modes, which we’ll get to.

It’s a courageous move by Motive Studios to not simply retread old ground, rehash battles from the films and call it a day. Instead they’ve crafted a story that takes place a short time after the battle of Endor.

I'm Not Such a Bad Pilot Myself

You’ll play as the New Republic’s Vanguard and the Empire’s Titan squadrons throughout the 14 mission campaign. Both sides have interesting characters that you’ll get to know through a mixture of capital ship conversations and comms chatter.

It can feel quite jarring, as any progress you make on one side is usually undone by the other a couple of missions later. But at the same time it highlights the power struggle between two opposing forces superbly.

There aren’t any history-defining moments in Star Wars Squadrons. But the game positions itself into the Star Wars canon and builds on the events of Endor perfectly. The story is about you and your squad. It’s about their motivations and events that led them to where they are.

It’s difficult to feel sorry for the Empire’s pilots but Motive Studios have done an excellent job at providing depth and nuanced personalities for the space Nazis. You may not agree with their motivations, but you’ll understand them. And in some cases, you’ll discover the mistakes they made that have led them down their paths.

There are many fantastic moments throughout the campaign and it’s well worth jumping into. It also serves as an in-depth tutorial for multiplayer, with each mission introducing new mechanics, ships and weapons.

The mechanics of Star Wars Squadrons centre on transferring power to certain systems at the right time as well as choosing which targets to prioritise and where to place your shields. Some ships can swap power between the engine and weapons, while others can shift shields between the front and rear. The single-player mode does a great job of teaching you this without becoming overwhelming.

Almost all my time playing Star Wars Squadrons has been spent using a controller and staring at my boring TV with my boring eyes. This seems like a waste, as Squadrons feels like it has been designed with VR in mind. During time spent out of your ship in hangars and briefing rooms, you don’t walk around, but rather you choose a spot to “teleport” to. VR users will be well-versed in this. But entering the cockpit of an X-Wing or TIE Fighter for the first time in VR is truly special. I only spent a short time with VR, but it was everything I wanted. The level of detail in every aspect is wonderful and the entire experience makes the game even more intense. If you’re looking for a reason to invest in VR, then Star Wars Squadrons is it!

Great Shot, Kid. That Was One In a Million

As mentioned, multiplayer has two main modes - Dogfight and Fleet Battle. Dogfight is team deathmatch in space - it’s fantastic. You’ll weave in and out of asteroid fields, either in pursuit of your opponent or trying to escape them. The thrill of “missile evaded” flashing up on your HUD never gets old. Neither does destroying an opponent and flying through the explosion (barrel roll optional).

Fleet Battles are where the tactical side of Star Wars Squadrons excels. Ship choice and loadout are the difference between victory and defeat. This is especially true in the ranked playlist, which is understandably locked until you hit pilot level 5. Don’t worry, this will only take a few matches and you’ll pick up a few tips and tricks as well as glory points and starfighter components. The latter are used to unlock new systems for your ships, including special weapons and countermeasures. Unlocking these tools will prove invaluable. Seeker Mines are particularly fun to drop behind you when being pursued.

In Fleet Battles you’ll destroy enemy fighters, comprised of other players as well as AI. Destroying these boosts your team morale meter. Once the meter hits a certain point, your team can move onto larger ships and eventually the enemy capital ship. I’ve had tremendous fun experimenting with ships and loadouts. My personal favourite being Y-Wings (or TIE Bomber) with two types of bomb. The feeling of a successful bombing run on a capital ship is exhilarating, especially when knocking out their targeting systems or shield generators.

Micromanaging your ship’s myriad of systems on the fly gives multiplayer an incredible amount of depth. Spawning from either just outside combat areas or from capital ships eliminates the worry of spawn campers. The game also has a ping system with the usual communications for those times you can’t be bothered to use a mic.

As stated, you’ll receive the starfighter components and glory points as you progress. Glory points are used to buy cosmetic items to pimp your ride. Dazzle your opponent with a fetching paint job. Take the stress out of being pummelled by a Star Destroyer with an Ewok bobble-head on your dashboard. You can even change the hologram that delivers important information. I’m currently saving my glory points so I can have all my mission critical information delivered by Jabba’s little mate - Salacious B. Crumb. You gain 200 glory points per win, the most expensive items currently costing 1200. Daily challenges are available to help boost your point total so nothing is too much of a grind. At the time of writing, there are no micro-transactions. I really hope EA keep it this way. Star Wars Squadrons' emphasis on multiplayer is reflected in the trophy/achievement list. Speaking of which...

I currently have 19% of the trophies/achievements. Only 15 of the 50 are for single player, the rest are for various feats in multiplayer. These range from destroying an enemy player while having less than 5% hull to playing a certain number of matches. None of the multiplayer trophies are difficult, they just need time and a little skill. The most difficult will be completing the story on Ace difficulty, which gives your ship’s hull the same laser resistance as a piece of paper.

Over the last week I’ve spent every waking moment raring to jump back into the cockpit of my beloved Y-Wing with its “I’ve completed the campaign” paint job. Multiplayer is everything I’ve wanted since X-Wing VS TIE Fighter. Dogfights are frenzied games of cat-and-mouse. Fleet Battles have a wonderful amount of tactical depth. If you have a VR headset, this game is something you need to experience. If you don’t have VR, then go treat yo’ self. Both you and Star Wars Squadrons deserve it.

The free app is a vital part of the NHS Test and Trace service in England, and the NHS Wales Test, Trace, Protect service.