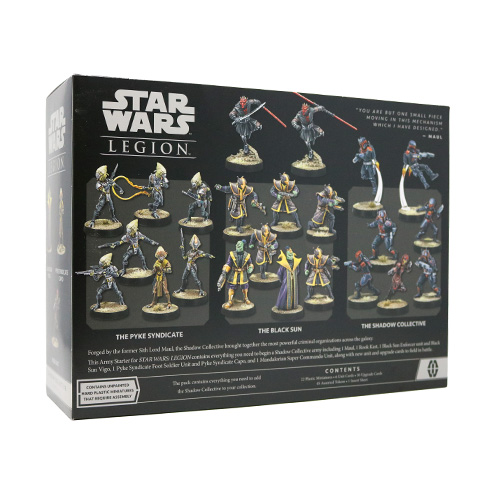 you could earn 4819 victory points

you could earn 4819 victory points

The galaxy’s seedy underbelly comes to Star Wars: Legion with the Shadow Collective Starter Set! This set introduces mercenaries to the game, inviting players to hire units from the notorious Black Sun and Pyke syndicates to join other faction’s armies. Alternatively, Maul himself can unite these disparate criminals under the banner of the Shadow Collective and lead them as a standalone force. Alongside his Mandalorian Super Commandos, they form a threat that could bring the galaxy to its knees.

Whichever path they choose, this set gives players plenty of new options for building their armies with 22 miniatures, including Maul, a unit of Shadow Collective Mandalorian Super Commandos, a unit of Black Sun Enforcers, and a unit of Pyke Syndicate Foot Soldiers. Additionally, players can further customize these forces with 30 upgrade cards that unlock heavy weapons, characters like Rook Kast, and more. Finally, this set also includes three command cards for use with the new mercenaries, three new command cards for Maul, and reprints of Maul’s three Separatist Alliance command cards.

Star Wars Legion combines the best of card and miniature gaming, and the Shadow Collective Starter Set simply adds to your immersion into the universe. A caveat to this review is that you need to own an existing core set from the Star Wars Legion collection, as this starter set is not a standalone game.

Shadow Collective is a wonderful addition to your collection, and it is very awesome to see the folks at Atomic Mass Games working on miniatures beyond the standard Separatists and Republic soldiers we've seen so far. These characters had a massive impact on unfolding story of Star Wars in The Clone Wars / Rebels series (arguably the best shows to come from the franchise), and so it is great to have a set featuring them.

What's In The Box?

If you like Star Wars Legion then you're going to enjoy more of the same. This new set gives players plenty of new options for building their armies with 22 miniatures including Maul, a unit of Shadow Collective Mandalorian Super Commandos, a unit of Black Sun Enforcers, and a unit of Pyke Syndicate Foot Soldiers.

Additionally, players can further customise these forces with 30 upgrade cards that unlock heavy weapons and characters like Rook. The set includes three command cards for use with the new mercenaries, three new command cards for Maul, and reprints of Maul's three Separatist Alliance command cards. There is a new miniature for Maul, and you can have him armed with his trademark dual lightsaber or with the famed Dark Saber that gives him dominion over the peoples of Mandalore.

The miniatures themselves are amazing and there is a lot of variety between them in terms of how they look and how they can be armed, from the Mandalorians to the Pykes. Each faction comes with different poses to choose, and weapon choices depending on how you want your army to interact.

Part of the fun of the Star Wars Legion franchise is in assembling your army, and this collection does not disappoint. You are given a lot of choice with poses and weapons to create the army you want. We did find this set a lot more fiddly than in previous versions, and it seemed to take longer to put the miniatures together. However, once assembled, we got them sprayed and they looked fantastic ready for their first battle.

To play Star Wars Legion, you place your units in one range of your starting area, and then take turns one by one moving troops and ordering them to perform certain actions such as dodging, aiming or attacking. Order cards are used at the start of each round to determine who goes first, and each card has an effect on it which causes events to happen. All damage is decided by rolling dice indicated on the number shown on your unit's card for that attack.

The opponent then rolls dice equal to the amount of damage they take, unless they have an ability that lets them alter the number of dice rolled, to reduce damage taken. After battle, face down tokens are placed one by one to determine which troops you are to use. We play to defeat all of your opponent's troops, however there are other missions you can do in the core box.

I love the Legion gameplay, and this set is a great addition. There isn't anything new here in terms of gameplay, so you can easily pick up and play from reading the new cards If you are already confident with the system. There are some really great moments when you realise how to use your unit's abilities and with this set you get more interesting factions to add to your existing army.