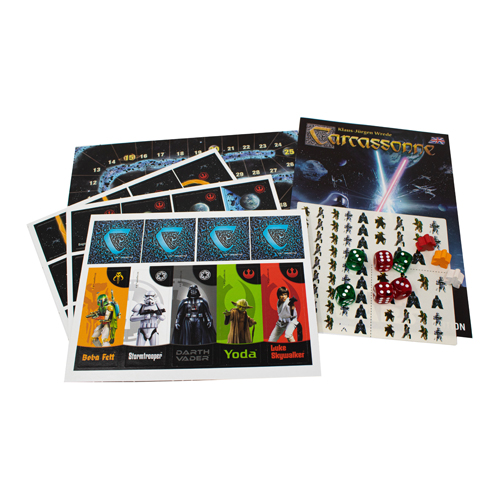 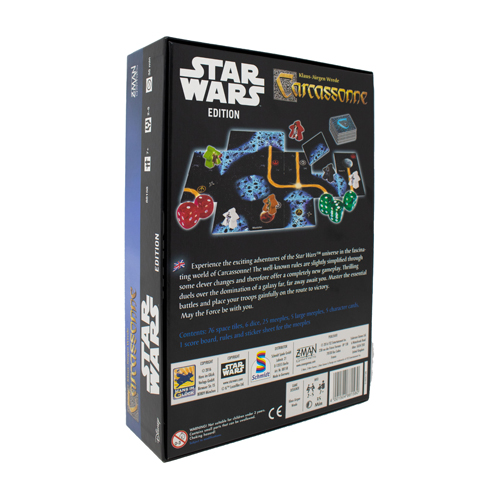 Pay in 3 interest-free payments on eligible purchases. Learn more
Success! We will let you know when this product is available again.
Your email address has been unsubscribed!
Your email address has been unsubscribed!
Notify me when this product is available to purchase!
This email address is already subscribed to this product!
Experience the exciting adventures of the Star Wars universe in the fascinating world of Carcassonne! The well-known rules are slightly simplified through some clever changes and therefore offer a completely new gameplay. Thrilling duels over the domination of a galaxy far, far away await you. Master the essential battles and place your troops gainfully on the route to victory. May …
Read More
Category Board Games SKU ZBG-SCH88158 Availability Out of stock
Share
Share this
90%

Experience the exciting adventures of the Star Wars universe in the fascinating world of Carcassonne! The well-known rules are slightly simplified through some clever changes and therefore offer a completely new gameplay. Thrilling duels over the domination of a galaxy far, far away await you. Master the essential battles and place your troops gainfully on the route to victory. May the Force be with you. Ages 7+, 2-5 players, 35 minutes playing time.

Star Wars Carcassonne is a fun stand-alone version of the original Carcassonne tile placement game. You can choose from a selection of beloved characters, such as Luke Skywalker and Darth Vader, exploring trading routes (roads), asteroid fields (castles) and planets (churches). You can also battle your opponents for the points.

The components inside the box really compliment the theme of this game. You can play with four different characters:

Each set of meeples comes with one larger meeple (which gives you extra points) and enough stickers of each of the characters so that every meeple has a sticker on each side. The stickers are highly detailed but can be fiddly placing them on the meeples. There are also spare stickers for each character in the box.

Every player also has a thick card token with a photograph of their character and symbol (Rebel, Empire and Bounty Hunter) as well as the character's name. These are well made, double-sided with great artwork.

In this version of the famous game, you have six dice for battles, three red and three green, all of which are translucent and have a good weight. The player's scoreboard mimics the artwork of the tiles, helping continue the theme, giving you a fun looking and well-designed scoreboard.

The tiles have kept their Carcassonne charm while still being immersed in the Star Wars universe. All the tiles have a high finish to them with great looking artwork. All the planets in the game are named after planets in the Star Wars universe, such as Tatooine, Alderaan, Mustafar, and Hoth. They changed the roads to trade routes and made them look like trails from a spaceship.

Star Wars Carcassonne starts the same way as the original. You will have the starting tile in the middle of the table and the first player places a tile to continue the scene. Trade route to trade route, asteroid belt to asteroid belt, and open space to open space.

Then, if you wish, you can place one of your chosen meeples on the route, asteroid, or planet. If you were to place the large meeple you have you will get extra points when you complete the route. Each player will take their turn picking a tile, placing it, and placing their meeple.

Here is where it gets more interesting. If two players end up either on the same planet or merge routes two into one, they will have to battle for the points. You do this by gaining one dice per each of your small meeples in the battle. You will receive two dice if you have used your larger meeple, and an additional dice if there is a matching faction symbol - but with a max of three dice each.

Everyone in the battle will roll all their dice, pick their highest roll and discard the other dice. The player with the highest roll wins and will receive all the points. If there is a tie, each player that ties will receive one point each before re-rolling until there is one winner.

I really like Star Wars Carcassonne. It still has all the essence of Carcassonne with the added fun of the new theme. I also think the duelling aspect is a fun mechanism, which just makes it stand out from the original - Although, you can go through an entire game without duelling.

All the components are of high quality, even the box pops out - with Darth Vader and Luke Skywalker having a lightsaber battle underneath the words Carcassonne. Even though the box says from seven up, this game was easily picked up by my five-year-old, so it's a great game for young families as well as grown-ups.

If you're interested in seeing all our other Carcassonne products, you can find our collection here.

Editors note: This blog was originally published on March 12th, 2018. Updated on December 7th, 2021 to improve the information available.