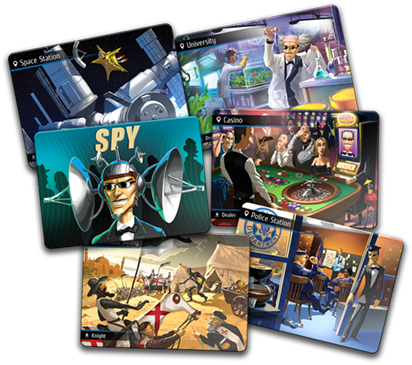 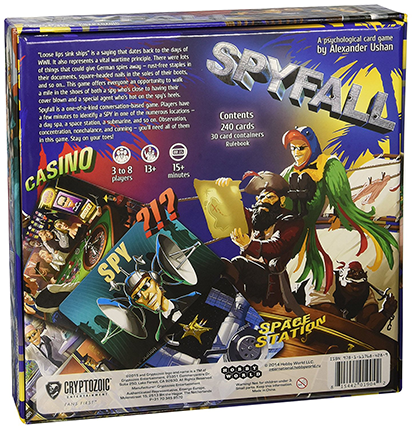 Spyfall is a game of intrigue, charm and confidence – or lack thereof, depending who you’re playing with. In a top secret location, a spy is lurking, but this bumbling agent isn’t quite sure where they are. Are they scoping out a school? Perhaps a circus or a crusader army? They can’t be sure and must conduct some sleuthing to deduce the location. Everyone el…
Read More
Category Board Games Tags Alexandr Ushan, Cryptozoic Entertainment, Dice Tower, Golden Pear, Podcast Approved, Spyfall SKU ZBG-CZE01904 Availability 3+ in stock
Share
Share this
72%

Spyfall is a game of intrigue, charm and confidence - or lack thereof, depending who you're playing with. In a top secret location, a spy is lurking, but this bumbling agent isn't quite sure where they are. Are they scoping out a school? Perhaps a circus or a crusader army? They can't be sure and must conduct some sleuthing to deduce the location. Everyone else, however, wants to expose the agent. In this social deduction game, brought to you by Cryptozoic Entertainment, one player is given the role of spy, with the remaining players just regular users of a given location. Only the non-spies are aware of where they are and are aiming to discover who has taken on the hidden role. The objective of the spy is to discover their location whilst maintaining their disguise. In turn, players ask one another questions, mainly in relation to their location, to complete their respective goals. Spies must try to bluff convincingly, as to dispel suspicion. Meanwhile, non-spies must respond in such a way that their allies can rule them out as suspects, whilst also remaining vague enough that the hidden location isn't exposed. What follows is a nail-bitingly tense, yet often hilarious series of interrogations. Players are encouraged to role-play their occupations indicated in the corner of their cards to both heighten the hilarity and introduce an interesting twist to gameplay. Then, following a vote called by a particularly paranoid player, or at the end of the eight-minute round, if the spy isn't discovered, they win! Within the Spyfall game box, there are 240 cards to represent the 30 different locations, along with the various roles within the establishments, and the spy cards. To help easily set-up each game, 30 zip lock bags are also provided. After the initial organisation, the set-up time is reduced to seconds. With accessible rules, lightning-fast setup time and a player count of up to eight, Spyfall makes for a fantastic party game. Player Count: 3-8 Time: 15 Minutes Age: 13+

In Spyfall, you play a Spy! Well technically one player will, whilst the others players have to root him out. If you do get randomly dealt the spy card then you have to work out which location you are all in before the others uncover you. Why you don’t know where you are is left unexplained by the manual. Perhaps the spy is blind or stumbling round in the dark? Let’s be kind and imagine maybe the spy has pulled a sickie and is dialling in to some conference call?

The box contains a small manual and cards. Lots of cards, divided into lots of bags. Each bag will contain seven cards detailing that location and one spy card. All you need to add is a bunch of imaginative players!

Set-up is instant. Randomly pick a bag. Pull out one card per player - ensuring you don’t leave the spy card in the bag. One amazingly funny game did result from every player knowing the location as we has forgotten the spy card but that will get old quickly trust me!

Shuffle and deal the cards. All take a look, pick the first player and off you go!

The first player chooses someone and asks them a question to try and determine whether they’re the spy, but without giving away the location. Once that player has given an answer, they then get to ask a question to any other player (with the exception of the person who just asked them).

This continues until someone stops the game, with each player being aloud to stop the game once. If the spy stops it, they reveal themselves and get one shot at guessing the location. Get it right and they win. Get it wrong and..... you guessed it, they lose. If anyone else stops the game they can accuse the spy. There’s then a vote between the non accused players. If there is unanimous agreement, the accused reveals their card.

Everyone else wins if the card reveals them to indeed be the spy. Otherwise the real spy reveals themselves and wins! If there are any dissenters among the voters, then the game continues. If there is no winner within eight minutes, there is a debate between the players, then the dealer accuses someone as the spy using the same voting rules as before.

If there is no unanimous vote by the time every player in-turn has accused, the spy wins! So the key here lies in giving an answer which demonstrates to other people you know which location you’re in without being so specific that you give the location away!

There's also a scoring system so that multiple games can be played (it recommends five games over an hour) with the spy or agents winning points based on the success, and manner in-which it's achieved.

In addition to the location, each card also has a job on it. So each fairground location card may also contain “ride operator” or ‘candyfloss seller” for example. The game recommends you don’t play these roles from the start but to be honest, by the time you’ve finished your first game you’ll understand the game down to a tee.

These roles definitely add a bit character to Spyfall and also make it more interesting. Without them, everyone tends to give quote generic answers to avoid giving away the location, and the spy has to give generic answers as they don’t know any specifics! With the roles, you can get into the spirit and give more detailed relevant answers without necessarily giving the game away.

So, is Spyfall any good?

Honestly, I think the answer to this is “it depends”. The first time I played Spyfall I loved it and went and bought it immediately (thanks phone for not preventing drunken online ordering). I’ve played subsequently and had a pretty average experience but had other nights when I remember why I liked it in the first place.

It really comes down to the people you play Spyfall with. It can be a fairly dull routine experience, with people asking “is it hot here?" or "would you go here at night?” etc and answers such as “it depends,” “You could."

Or you can play as it was intended and role play a little and ask things like “wasn’t last night’s dinner great, what did you eat”? Or “you missed the party, how come?” When played like this it’s a great filler game in-between longer games, an ice breaker or for Christmas holidays with non-gaming family members.

At it a worst Spyfall is fairly routine and dull. But if you have the right friends or are looking for a quick game that can be played by anyone, or by a large group or down at the pub for example, it’s definitely worth picking up.