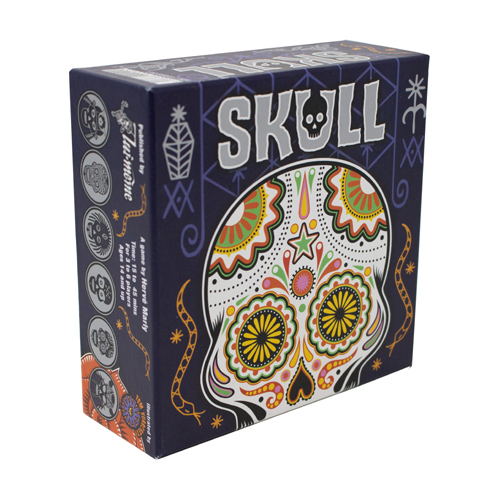 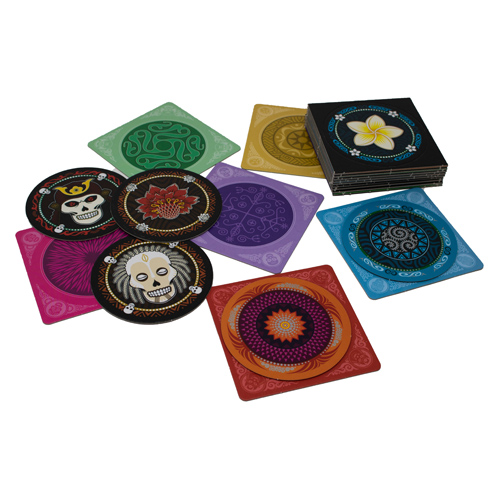 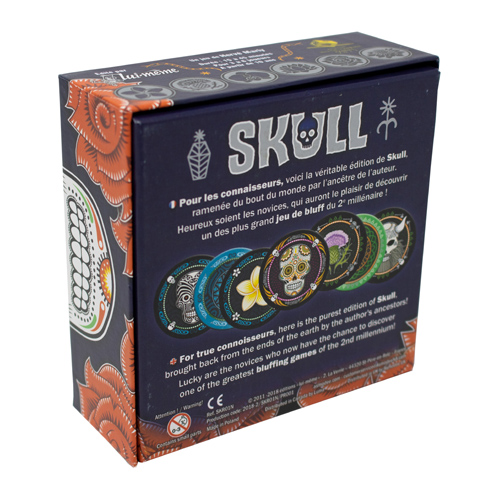 you could earn 1339 victory points

you could earn 1339 victory points

Add to Wishlist
Some of the best games are simple. They play into human traits that fascinate us all, namely lying, bluffing and cheating. We also all think that we know our friends a lot better than we maybe do. Skull takes advantage of these things in a straightforward and elegant fashion. Upon opening the box for Skull you might wonder if you have purchased a set of pub coasters rather than a bo…
Read More
Category Board Games Tags Asmodee, Best Sellers, Fun for Kids, Gifts Under 20, Golden Pear, Secret Santa, Silver, Skull, Stocking Fillers, Stunning Artwork SKU ZBG-ASMSKR01N Availability 5+ in stock
Share this
74%

Some of the best games are simple. They play into human traits that fascinate us all, namely lying, bluffing and cheating. We also all think that we know our friends a lot better than we maybe do. Skull takes advantage of these things in a straightforward and elegant fashion.

Upon opening the box for Skull you might wonder if you have purchased a set of pub coasters rather than a board game, as each player gets one square player mat and four circular cards made of thick, well err... coaster like cardboard. Three of these will have a flower depicted on one side and one skull. On your turn, if there is no card on your player mat you place one of your cards face-down on it. Next time round you have a choice, lay another card face-down or make a bid for how many cards you can turn over without revealing a skull. If you make a bid each other player will get a chance to bid higher or pass.

Once only one bidder remains that person must face the gauntlet and do what they claimed they could. The one rule is that they must start with their own cards first, once through that pile they can go in any order across the other players cards.

Sounds easy right? Only, then you play the game, and you know you have a skull as the second card down, but Sally next to you has just bid ‘2’ and you are sure if you bid a ‘3’ then Keith will definitely go to ‘4’ but if he doesn’t then you are going to draw your own skull - the ultimate embarrassment in this game.

If you draw your own skull then you get to choose one of your cards to discard, but if you draw another player's then they draw one of yours at random and discard it without looking. If you happen to succeed at a bid then you flip your player mat and if you succeed one more time then you win the game! That’s right - you only need two points to win!

Skull represents a lot of fun in a small unassuming package. It’s fun played with family on a night in or taken to the pub to play with friends - just don’t mistake the components for coasters...

The game consists of the basic components of four circular cards and a square base card for each participating player, with each player having an intricate design of a Skull and three beautifully designed flowers. (Please be aware there are different designs of this game, this particular version has flowers)

So, you have your awesome looking game, but how do you play Skull?

Well generally you nominate someone to start, and in doing so that person will place one of their four cards down, be it a flower or the dreaded skull. The idea of the game is to bid how many flowers you think you can find from the placed down cards on the table. So as you go around the circle of players, each will place a card down, and the circle can keep placing cards down until someone decides enough is enough and they fancy trying to bid to find a number of flowers. Skulls are to be avoided, find a skull you’ll lose the round and one of your cards in the process.

So, for example, each player has to place a card down, but when the turn rotates back to the starting player he has to decide whether to place another card, so he has two cards on top of each other, or bid. If he places another card, then it’s onto the next player to make that same choice. If he lays another, it’s up to the next player to do likewise, lay a card or start the bid.

If a player decides it’s time to bid, he will nominate how many flowers he thinks he can find without turning over someone’s skull, when bidding starts, everyone bids or passes, no more cards can be laid. The person who bids the highest, and this will be decided as everyone else will have passed by this time, will take on the challenge. 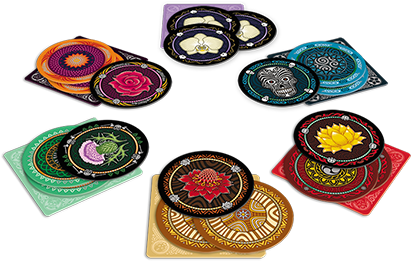 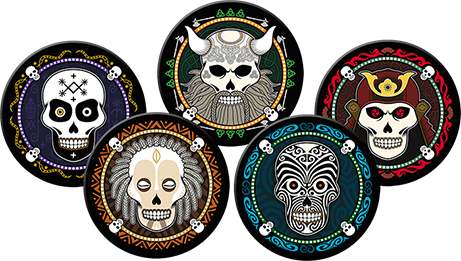 What happens next in the game is that firstly they turn over both their cards, hopefully he will not have laid a skull himself (this can be done in the hope to get someone else to outbid and take on the challenge), if he does have a skull then he has lost straight away. If he doesn’t and he has flowers, he then nominates someone to turn over their card, he can only ask them to turn a card over one at a time starting with their topmost card first, but you don’t have to ask them to turn over all their cards.

The player searching for flowers, continues to get players to turn their cards over until he has successfully found the number of flowers he was looking for... success job done... you win that round, at this point you take your square card and turn it over indicating a victory. Do all this again and turn your square card over again, you win the game.

This is where others will try to spoil your fun, and get you to find their skull. The consequence of trying to get those flowers is that someone may have placed a skull to thwart someone. If you find another player's skull, then you lose a card, that card is randomly chosen by the player whose skull you found. At this point it’s wise to ensure no-one sat next to you can see your cards, so place them on the table face down, get the player choosing your card to select one, and you pick up your remaining cards hoping that you have that skull still.

Note: If you unfortunately overbid, and you had placed a skull as one of your cards, so of course you reveal it, you can choose which of your own cards you want to get rid of.

The next starting player will be the person who’s either won the hand by finding the flowers, the person whose skull was discovered, or the last starter should the bidding player turn over his own skull. The gameplay will get harder of course as player's cards in hand are reduced, memory of what other players have left in their hand when they have to turn over cards from time to time, will go a long way of working out who has what left.

So, I have to apologise now for the above description of gameplay. Describing this type of gameplay is complicated and it just looks a bit gibberish, but believe me when I say that once you get the game, you get your friends and start playing it, all will make sense!

But to be honest for the first five minutes you’ll probably be all admiring the set of cards in your hands, I know I have said it before but they truly are a work of art in themselves. This game is truly a great time filler.

Skull is a 1-6 player game, but if you have another set of either the same, or maybe another set with a different design, then you can easily increase the number of players giving it a go at the same time.